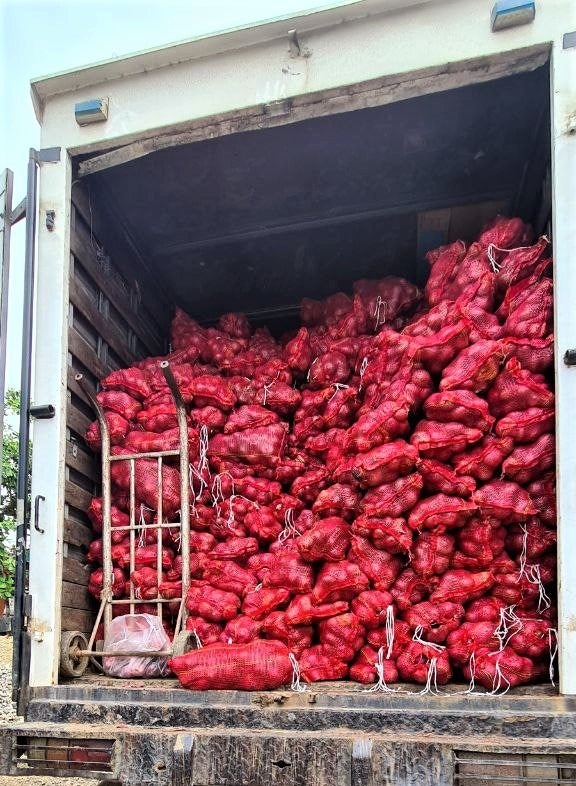 Authorities intercept a van loaded with around 3,000 bags of smuggled red onions in Zamboanga City on Monday, January 23, 2023.

MANILA, Philippines — Some 44,000 kilograms of smuggled red onions have been seized by authorities in Zamboanga City, said the Naval Forces Western Mindanao (NFWM).

The NFWM on Tuesday said a van containing about 3,000 bags of smuggled red onions and a watercraft marked MJ MARISA with around 8,000 mesh bags of the same smuggled goods were intercepted in Varadero de Cawit, Barangay Cawit.

“Each bag weighs four kilos, which sums up to approximately 44,000 kilos of smuggled onions that were seized.” NFWM said in a statement.

It then reported that another watercraft marked ML ZHARY, which was filled with some 300 drums of smuggled petroleum, oil and lubricant products, had also been subjected to a Visit, Board, Search, and Seizure by authorities.

“The involved vehicle, watercraft and smuggled items were held and are still subjected for proper inventory before their turnover to the appropriate agency for popper disposition,” NFWM added.

Rampant smuggling of agricultural goods, especially onions, have recently reignited alarm among farmers, lawmakers and other groups as they continue to press for a firmer crackdown on the illicit practice.

President Ferdinand Marcos Jr., who concurrently sits at the helm of the agriculture department, said the government has “some very good ideas” to curb agricultural smuggling such as the digitalization of the Bureau of Customs.  — Niña Cuasay, trainee

BOC: Smuggled onions, other agri goods worth P171.3M seized from one consignee