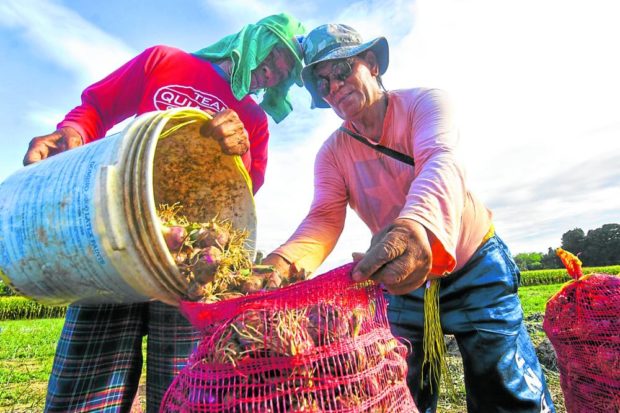 SOURCE OF LIVELIHOOD Farmers at Barangay Manambong Sur in Bayambang, Pangasinan, harvest their onions to save the crops from being destroyed by armyworms in this photo taken on Feb. 17, 2022. A similar infestation hit onion farms in the town in 2021, causing farmers to incur losses. —WILLIE LOMIBAO

MANILA, Philippines — Farmers have demanded that the government reverse its decision to import 21,060 metric tons of onion, alleging that they are already suffering the effects of the decision.

The first batch of imported onions–400 metric tons of yellow onions and 800 metric tons of red onions–arrived in the Philippines on Monday as part of the Department of Agriculture’s (DA) “temporary, short-term” solution to tame the price boom of the agricultural commodity.

But farmers’ group Kilusang Magbubukid ng Pilipinas (KMP) is pushing for the government to “immediately recall the importation order to prevent heavy losses and bankruptcy of our onion farmers.”

“Farmers are already feeling the brunt of the DA’s importation order. The DA must find ways and means to procure the local harvest at a reasonable price to prevent unscrupulous traders from further exploiting our farmers,” KMP chairman emeritus Rafael Mariano said in a statement on Tuesday.

He used as an example the plight of onion growers in Bayambang, Pangasinan, who increasingly depend on bank loans and investors.

“Maraming umiiyak na magsasaka. Marami kaming nalugi, hindi lang ako (Many farmers are weeping. Many of us are losing money, not just me,” the group said, quoting farmer Merlita Gallardo–who earlier appeared at a Senate committee’s inquiry into the soaring prices of onions in the country.

Mariano also pointed out that the declining retail of onion price is likewise bringing down its farmgate price.

He urged the DA and the local government units to realign their spending plans to purchase onions from local farmers should it be deemed necessary.

(The LGUs should store the onions from our local farmers first before selling them when the prices are good, so the farmers could at least gain from their harvests. Because if they sell the local onions now, they’ll lose money since there are imported onions.)

Mariano then called for the government to extend onion farmers’ production support and cash aid.

He also underscored the need to crack down on illegal traders and smugglers of the produce who, he noted, “are behind the cartel that manipulated the supply and prices of onion that led to the onion price surge of P700 per kilo last month.”

(Old names of smugglers resurfaced – Leah Cruz, Manuel Tan, Jun Diamante, and Andrew Chiang. There are also new names – Mike Ma, Gene Ang, and Beverly Peres. But no one was ever caught, and no cases were filed.)

He also sought the House committee on ways and means to subpoena these suspected smugglers for an investigation.

President Ferdinand “Bongbong” Marcos Jr., who concurrently sits at the helm of the DA, said the country was “forced to import” onions, claiming that the local supply of the agricultural commodity is not enough to meet the demands for the produce.

He said this given several lawmakers and groups who expressed concern over the DA’s decision to import 21,060 metric tons of red and yellow onions even as the local harvest season for the produce nears.