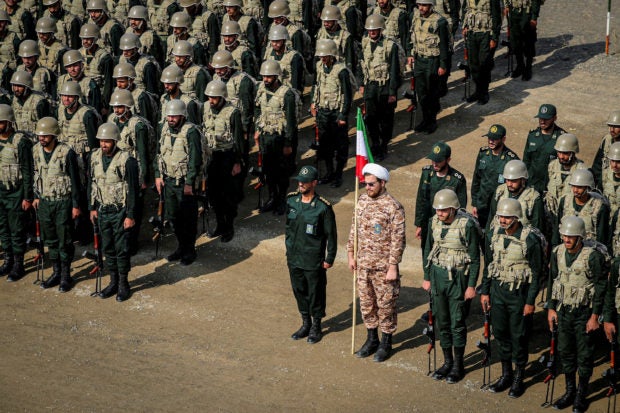 BRUSSELS — The European Union (EU) on Monday imposed sanctions on more than 30 Iranian officials and organizations, including units of the powerful Revolutionary Guards, blaming them for a “brutal” crackdown on protesters and other human rights abuses.

The United States and Britain have also issued new sanctions against Iran, reflecting a deterioration in the West’s already dire relations with Tehran in recent months.

Foreign ministers from the EU’s 27 member countries agreed on the measures at a meeting in Brussels.

The sanctions targeted units and senior officials of the Islamic Revolutionary Guard Corps (IRGC) across Iran, including in Sunni-populated areas where the state crackdown has been intense, a list published in the EU’s Official Journal showed.

Some EU governments and the European Parliament have made clear they want the IRGC as a whole added to the bloc’s list of terrorist organizations. But the EU’s foreign policy chief, Josep Borrell, noted that could only happen if a court in an EU country determined the IRGC was guilty of terrorism.

“You cannot say ‘I consider you a terrorist because I don’t like you’,” he told reporters ahead of the Brussels talks.

The new sanctions were imposed on 18 people and 19 entities. Those targeted cannot travel to the EU and any assets they hold inside the EU can be frozen.

Relations between the EU and Tehran have spiraled downwards during stalled efforts to revive talks on its nuclear program and as Iran has moved to detain several European nationals.

The bloc has also become increasingly critical of the continuing violent treatment of protesters in Iran, including executions, and the transfer of Iranian drones to Russia.

READ: Iran weapons proliferation is risk ‘to us all,’ warns EU chief

“The EU strongly condemns the brutal and disproportionate use of force by the Iranian authorities against peaceful protesters,” Sweden’s Foreign Minister Tobias Billstrom said in a Twitter post by the country’s EU diplomatic mission.

The IRGC was set up shortly after the 1979 Islamic Revolution to protect the Shi’ite clerical ruling system. It has an estimated 125,000-strong military with army, navy and air units, and commands the Basij religious militia often used in crackdowns.

The day before the Brussels meeting, over a thousand people took to the streets of the city to protest against the detention in Iran of Belgian aid worker Olivier Vandecasteele.

Iran earlier warned the EU against designating the IRGC as a terrorist entity.