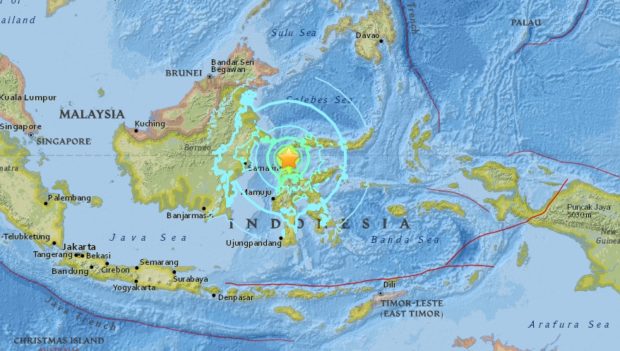 JAKARTA — A powerful earthquake with a 7.0 magnitude struck off Indonesia’s North Sulawesi province on Wednesday, the country’s geophysics agency said, adding that there was no tsunami potential.

The Pacific Tsunami Warning Center, however, warned in a bulletin that there was a risk of tsunami waves located within 300 kilometers of the epicenter.

The Indonesian agency said with the quake’s epicenter was at a depth of 64 kilometers (39.77 miles), 141 kilometers southeast of the town of Melonguane.

A resident in the city of Manado, the capital of North Sulawesi, said by telephone that the quake was felt very strongly for several seconds and people were seen running out of buildings.

However, the resident said, so far, no visible damage had been seen and some people had returned to their homes.

The following Instrumental Intensities were recorded:

Due to the earthquake’s strength, Phivolcs said damage and aftershocks should be expected.

Meanwhile, Phivolcs in a separate advisory said that there is no threat of a tsunami, despite the strength of the earthquake.

“Based on data provided by the Sea Level Monitoring Station in Mati City, Davao Oriental, no sea level changes were monitored,” said Phivolcs.

Indonesia and the Philippines rest atop the so-called “Pacific Ring of Fire”, making them two of the most seismically active regions in the world, experiencing frequent earthquakes.