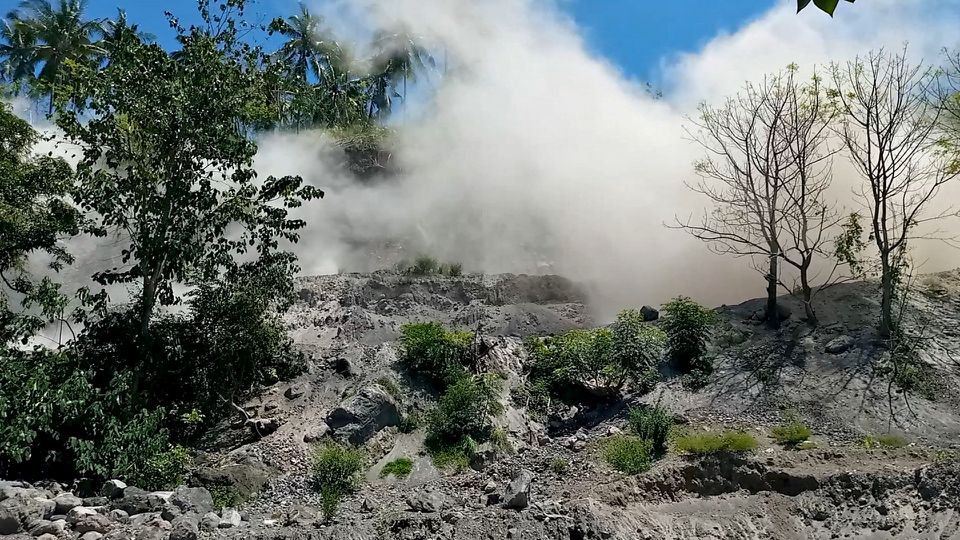 A still image from a social media video shows dust disturbances on side of hill after an earthquake in Nagekeo, East Nusa Tenggara, Indonesia December 14, 2021. Alldo Van Robby/via REUTERS

JAKARTA — A powerful 7.4-magnitude earthquake struck eastern Indonesia on Tuesday triggering a tsunami warning, the meteorological department said, but there was no immediate word on any casualties or damage

“Everyone ran out into the street,” Agustinus Florianus, a resident of Maumere town on Flores, told Reuters. Maumere was badly damaged by a quake of a similar magnitude in 1992.

The U.S. Geological Survey later said the quake had a magnitude of 7.3. An aftershock of 5.6 magnitude hit Larantuka after the first quake, the Indonesian agency said.

“It felt like a wave, up and down,” Zacharias Gentana Keranz, a resident of Larantuka told Reuters.

Alfons Hada Betan, head of East Flores Disaster Mitigation agency in Larantuka said there were no immediate reports of damage and the quake was felt for several minutes as people fled from their homes.

The U.S-based Pacific Tsunami Warning Center said that based on preliminary earthquake parameters, hazardous tsunami waves were possible for coasts located within 1,000 km (621.37 miles) of the earthquake’s epicenter.

Muhamad Sadly, an official with the meteorology agency told Metro TV people should stay away from beaches adding that the tsunami warning would be lifted at least two hours after it was issued.

Indonesia straddles the “Pacific Ring of Fire”, an area of high seismic activity that rests atop multiple tectonic plates.

At least 48 people were killed and hundreds injured when the Mount Semeru volcano erupted on Java island on Dec. 4.