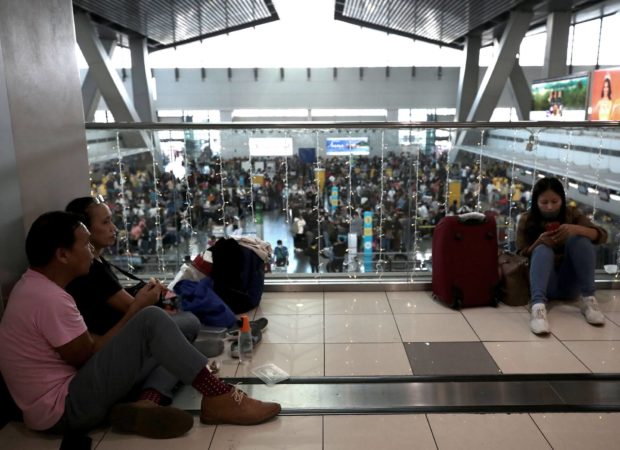 FILE PHOTO: Passengers queue at Ninoy Aquino International Airport Terminal 3 in Pasay City as they wait to board their flights following the resumption of airport operations on Monday, Jan. 2, 2023. INQUIRER file photo / RICHARD A. REYES

MANILA, Philippines –The Civil Aviation Authority of the Philippines (CAAP) on Tuesday admitted that there were problems in the maintenance of the equipment used for the country’s air traffic management system following the New Year’s Day fiasco that crippled outbound and inbound flights.

CAAP Director General Capt. Manuel Tamayo said this after House Deputy Minority Leader France Castro asked him if the temporary airspace outage could have been avoided had proper and regular maintenance checks on their equipment and power supply system.

“Tama po, ma’am [You’re right, ma’am],” he said during the hearing of the House transportation panel on the fiasco.

Citing the explanation of aviation authorities, Castro said the faulty circuit breaker should not be entirely blamed as she pointed out that there were also shortcomings on the part of the personnel tasked to maintain the equipment.

Tamayo again affirmed this, noting that equipment maintenance falls under the responsibility of CAAP.

He also said that CAAP and several government agencies are already conducting separate investigations to determine what triggered the circuit breaker malfunction.

Should there be anyone found negligent in this matter, Tamayo said they would be held accountable.

But Castro pressed that there was definitely negligence and incompetence in her assessment of the airspace chaos, especially since it concerns national security.

“Talagang malaking problema kung talagang ganito iyong klase ng pag-ma-maintain sa ating [equipment] (There’s really a big problem if this is the kind of maintenance we do for our equipment),” she added.

CAAP technicians not at fault

While he admitted to problems in the maintenance of CAAP equipment, Tamayo said there was no negligence on the part of their technicians since they conduct frequent checks on the Communications, Navigation, and Surveillance Systems for Air Traffic Management (CNS/ATM).

“This is based on the procedure. In almost all of the systems, meron nang nakalagay kung ano iyong dapat gawin [there’s already a protocol on what needs to be done]. We don’t think there was any negligence as far as the technicians are concerned,” he explained.

Tamayo also pointed out that the failure of the circuit breaker “could not really be anticipated in spite of the so many safeguards or procedures that are being done.”

“We are not authorized or capable of checking the internal workings of a circuit breaker. External lang iyong level namin to find out if it has input or output,” he added.

The CAAP official said internal defects in its equipment require them to seek help from the manufacturer or the service provider.

Moving forward, Tamayo said CAAP vows to “be more vigilant in taking [care] of this equipment.”

“Because of this incident, we’re now changing its maintenance procedures,” he said. “If we do it every day, maybe we could do it twice a day, or the best measurement, so that at least we could improve the reliability of this equipment.”

Rep. Paul Daza, of the 1st District of Northern Samar, then asked why augmenting the maintenance of CAAP equipment was not done before the fiasco broke out.

“Our basis on the schedule of performing this maintenance is based on the manufacturer’s recommendation. So since we have this experience, I think we need to enhance such kind of maintenance,” Tamayo said.

But he later noted that this does not necessarily mean the manufacturer’s recommendation was wrong since it was based on the product standards.

Diaz, however, argued: “Obviously, the manufacturer’s recommendation wasn’t sufficient because it failed.”

Tamayo then said it would be better to wait for the results of the ongoing investigations before pinning the blame on anyone.

Transportation Secretary Jaime Bautista, for his part, clarified that the CNS/ATM used by the CAAP was not outdated.

“Wala akong sinabi na outdated iyong equipment. Iyong equipment is working; the system is working. Nagkaroon lang ng technical problem. Although I mentioned that iyong system is in its midlife,” he said.

He noted that the CNS/ATM is using “2010 technology” as it was constructed more than a decade ago.

To recall, “outdated” was how Tamayo defined the technology behind the CNS/ATM during an online press conference hours after the airspace mishap broke out on January 1. With reports from Niña Cuasay, INQUIRER.net trainee