MANILA, Philippines — Following the technical glitch that led to the disruption of flights on New Year’s Day, the Civil Aviation Authority of the Philippines (CAAP) admits that the country’s air traffic management system is outdated.

CAAP Director General Capt. Manuel Tamayo in an online press conference on Sunday night said the technology behind the Communications, Navigation and Surveillance Systems for Air Traffic Management (CNS/ATM) of the Philippine Air Traffic Management Center was visualized in the late 1990s, and was completed just in 2019.

According to Tamayo, even before the glitch happened, he already recommended to Transportation Secretary Jaime Bautista and to President Ferdinand Marcos Jr. that the country use a more modern air traffic management system.

“Kasi like anything, it is an electrical system, meron na nga tayong backup, dalawa na nga ‘yan, but still it failed.  Now, our CNS/ATM, this was conceptualized way back in the late 90’s, naumpisahan ‘to I think 2010, and finally it was completed in 2018.  So medyo — as far as the technology is concerned — it is already outdated,” Tamayo said.

(Because like anything, it is an electrical system, we already had two backups but both still failed.  Now, our CNS/ATM, this was conceptualized way back in the late 90’s, it was started in 2010, and finally it was completed in 2018.  So as far as the technology is concerned, it is already outdated.) 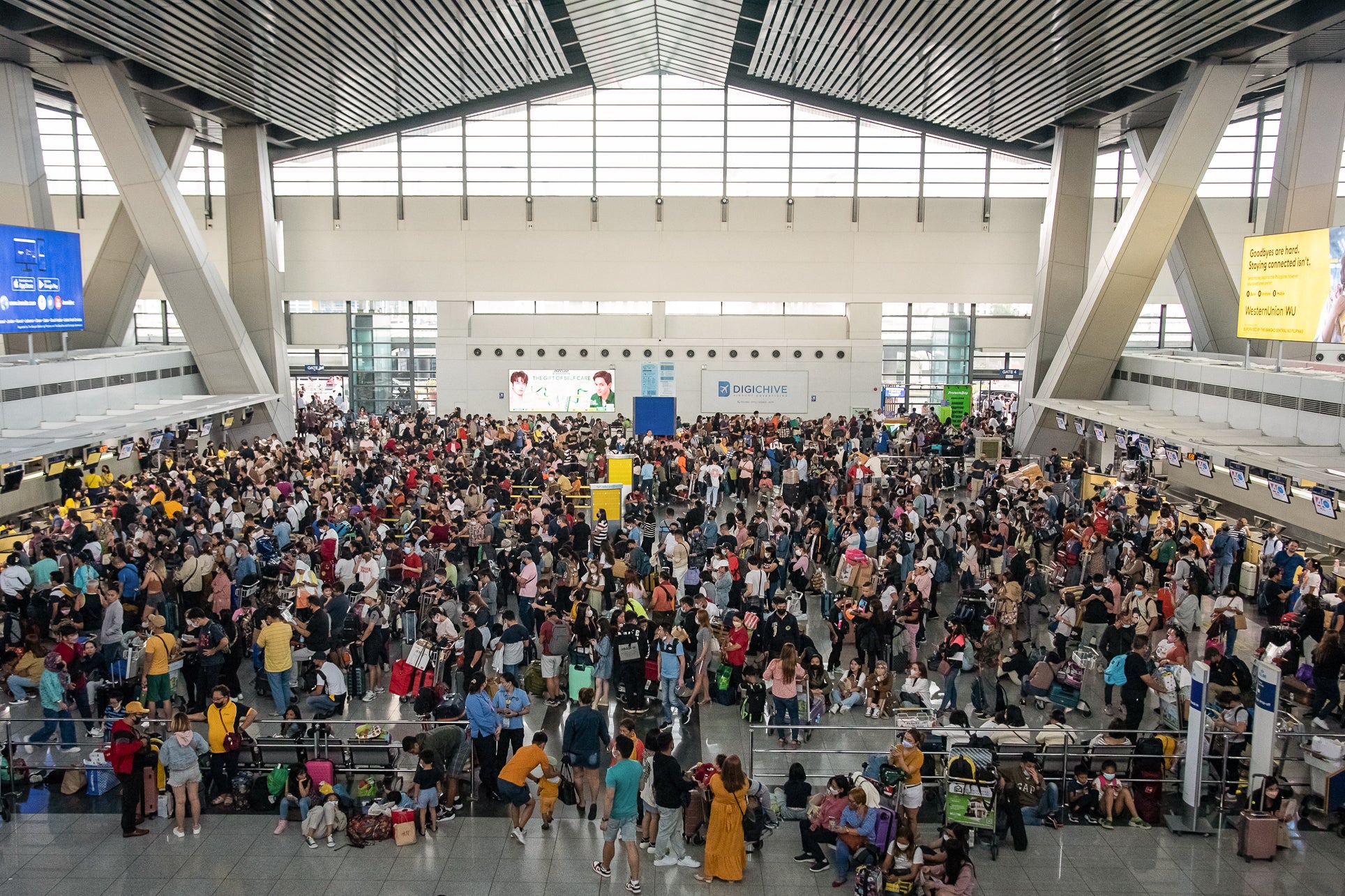 Passengers wait for information about their flights at terminal 3 of Ninoy Aquino International Airport in Pasay, Metro Manila on January 1, 2023. – Thousands of travellers were stranded at Philippine airports on January 1 after a “loss of communication” at the country’s busiest hub in Manila forced hundreds of flights to be cancelled, delayed or diverted. (Photo by KEVIN TRISTAN ESPIRITU / AFP)

The CNS/ATM is the system used by air traffic controllers to direct air traffic within the country’s airspace.The system, worth P10.8 billion, was completed in partnership with the Japan International Cooperation Agency (JICA) and was seen to boost the safety within the Manila flight information region.

However, on Sunday morning, after one of the cooling blowers of the CNS/ATM failed, the uninterruptible power supply (UPS) of the commercial power supply did not function.  Switching to the use of backup power through a generator also failed after the second UPS malfunctioned.

Tamayo said they tried to override the power supply by installing an automatic voltage regulator instead, but the system warned of an overvoltage — it was providing 380 volts for a system that runs on 220 volts.

As a result, several key components like the very small aperture terminal (VSAT), basically a set of satellite dishes used for communication, navigation, and computation of the data, were fried.

While flight operations at the Ninoy Aquino International Airport (Naia) may have normalized at around 8:00 p.m. on Sunday, at least 282 flights and over 56,000 passengers were affected.