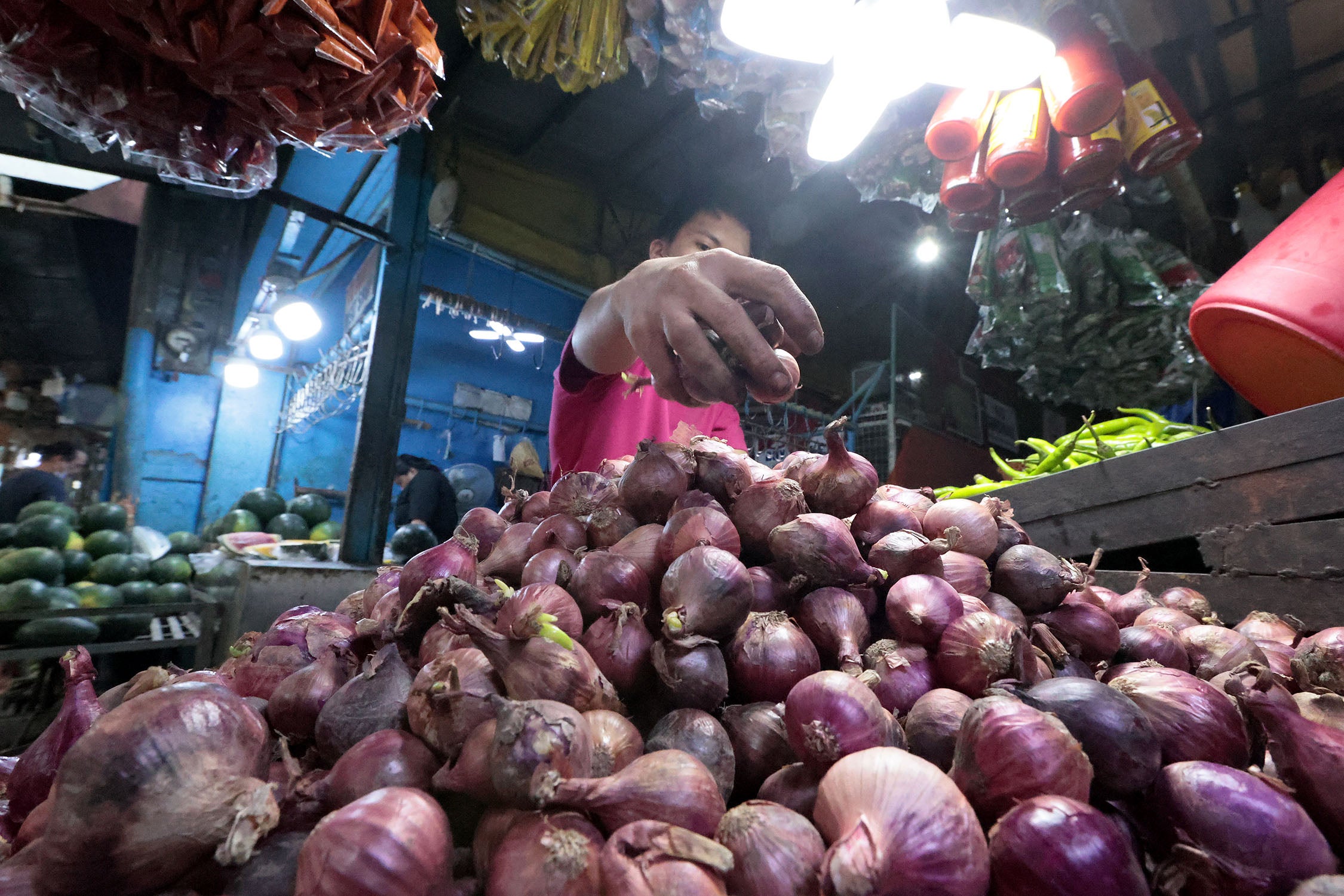 PRICED TO MAKE YOU CRY The Inquirer went to Marikina Public Market on Tuesday and confirmed that red onions, like the ones sold at this stall, are being sold at P600 per kilo, as reported by the Department of Agriculture. —GRIG C. MONTEGRANDE

The price of onion has skyrocketed to P600 a kilo in some public markets, or double last month’s level, but the Department of Agriculture (DA) said it was not considering allowing the importation of the commodity because there was still enough supply.

Based on the DA’s price monitoring as of Tuesday, prevailing prices of locally produced red onions averaged P500 a kilo, an increase of 150 percent from P200 a year ago.

Local red onions retailed from a low of P460 a kilo at Mega Q Mart in Quezon City to a high of P600 at San Andres Market in Manila and Marikina Public Market in Marikina City.

These prices are way more than the suggested retail price (SRP) for red onions set by the DA at P170 a kilo in October this year, but DA deputy spokesperson Rex Estoperez said at the Laging Handa public briefing on Tuesday that the SRP was only a “guide” and that prices would still be determined by the available supply and the demand from consumers.

“It will be challenging for us to enforce the SRP because if we do so, no vendor will be selling because their (production cost) is high,” he added.

The DA official said he visited several markets on Tuesday and saw vendors selling small onions at P480 a kilo and bigger ones at P520 a kilo.

“I asked one retailer if the (the onions) are still selling even if the price is like that, he said there are buyers and they are also waiting for the production (harvest) this coming January,” he recalled.

Estoperez could not provide an estimate of the volume of onions expected during next year’s harvest season, adding that many farms were still recovering from the effects of typhoons.

He said thousands of hectares remained unplanted due to the high cost of production and the onion farmers were worried since they “do not know when the prices will plummet, when the next typhoon is going to come.”

The onion planting schedule starts in September at the earliest until March, while harvesting may start in December until June, the reason that the DA official said more supply could be expected next month.

The Samahang Industriya ng Agrikultura (Sinag) said local red onions in the markets were overpriced and should be sold at only P430 to P450 a kilo.

Citing reports from local producers, the group said the farm-gate price ranged from P250 to P370 a kilo against P150 to P180 during the previous harvest. This is the selling price between farmers and traders or middlemen, with the latter often dictating the pricing.

Estoperez said he and other officials visited onion farms in Nueva Ecija, Tarlac, and Pangasinan provinces before Christmas and found out that farm-gate prices averaged at P300 a kilo.

He noted that onion farmers were currently benefiting from high prices because they were able to recover the cost of production.

“Our onion farmers are not complaining certainly, but are wary because they are being used (by traders) to justify the high retail prices of onions,” said Sinag executive director Jayson Cainglet.

“Obviously, traders are using the influx of imported and smuggled onions that have yet to be apprehended as an excuse to jack up local farm-gate price artificially and justify the current onion prices,” noted Cainglet.

Despite skyrocketing prices, Estoperez said the DA still saw no reason to authorize onion importation as the country was assured of sufficient stock.

The DA last month said that the government was considering the importation of 7,000 metric tons of red onions to stop the spike in the cost of the commodity, but that this would be made only if there was indeed a shortfall.

Estoperez said the DA was concerned about granting importation permits when smuggled onions might be “just around” being concealed, and worse, some traders might continue to import all the way up to the harvest season.

“As of now, we are not considering the importation of agricultural goods, especially onions. We know there is an imperfection in our system. We will need to provide better interventions, especially in the value chain,” Estoperez said, noting that “we have enough supply but just enough to meet our requirement.”

He said that during their trip to the onion-producing areas, it was evident that “interventions” have to be made in the value chain, such as credit, logistics, transportation, cold storage and packaging.

This was also the same situation with the vegetable supply from the Cordillera provinces, he added.

The interventions would have to address food security, climate change resiliency, and putting an end to smuggling at the same time, he said.

The aim of government intervention, Estoperez added, was to encourage the farmers to plant more onions, knowing that the government was ready to assist and protect them when needed.

Estoperez said that while the DA welcomed senators’ plan to prove alleged manipulation of onion prices, the agency hoped that with its increased budget for next year, it would better determine value chain priorities and interventions “to break the cycle” causing the lack of supply and high prices.

But Statista, a data consumer company, said the total land area being used for onion production in the Philippines has gone down to 19,300 hectares last year from 19,900 ha in 2019.

Only last September, the DA earmarked P100 million to strengthen local onion production, stressing that several interventions would be implemented to boost the industry.

For 2022, the DA allocated P47.48 million for the provision of seeds, seedlings and fertilizers, while P35.67 million was set aside to put up onion production and postharvest facilities, irrigation services and farm equipment.

At least P10.05 million was also allocated for onion production research activities, while 1.4 million was given to finance a package of technology training, according to the DA. INQ

Red onions for P300 per kilo: Supply not solely to blame