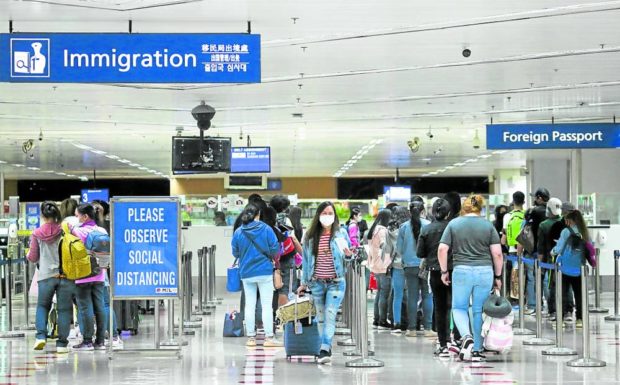 Immigration Commissioner Norman Tansingco noted in a statement that the increase in travelers was a “positive sign” that the country’s tourism industry is on the rebound.

According to the BI, immigration officers assigned at different international airports processed a total of 31,992 arrivals on Dec. 24.

The majority of the international passengers arrived via Ninoy Aquino International Airport (Naia), with Terminal 1 welcoming 10,047 passengers, while Terminals 2 and 3 had 4,646 and 12,615 travelers, respectively.

Meanwhile, the BI reported processing a total of 22,248 departures on the same day.

Naia earlier reported that arrivals had risen to an average of 17,000 to 20,000 a day since travel restrictions were eased starting May this year from 5,000 travelers when stricter pandemic protocols were in effect.

Tansingco assured the public that while lines are expected due to the worldwide increase in international travel, passengers are being expeditiously processed.

“All counters are fully manned, our e-gates are being utilized, and we have a special team of officers ready to augment manpower as needed,” he said, adding that the installation of e-gates, which use facial recognition, biometric scanning and other electronic security checks, has cut passenger processing time from 45 seconds to as fast as eight seconds.

He also noted that the implementation of the eTravel system also significantly reduced the paperwork for arriving passengers.

The system consolidates all data collection processes at the ports.

“Instead of having to fill out several forms for different agencies, all will be consolidated into one platform to streamline entry procedures,” Tansingco said in an earlier statement.

The use of the platform replaced the arrival cards, which were previously submitted upon arrival to the BI.

Information from the platform will also replace the Bureau of Quarantine’s One Health Pass and the Bureau of Customs’ arrival form.

Tansingco said he saw the project as a major achievement to ensure interoperable systems among government agencies.

This will hopefully reduce the stress level among returning Filipinos and foreign tourists going to the Philippines.

Travelers have long complained about problems upon arriving in the country, especially at Naia, considered as the main gateway to the Philippines but often ranked as one of the world’s worst airports.

A report released by the travel website hawaiianislands.com last month, ahead of the holiday rush, again ranked Naia as among the worst airports in Asia and the world.

Titled “The Most Stressful Airports in America and the World,” it analyzed more than 1,500 Google reviews for over 500 airports across the world.

“We analyzed the sentiment of Google reviews and ranked airports around the world and within the United States based on the percentage of reviews that indicate stress,” hawaiianislands.com explained.

Delays, long queues, and crying babies — according to the report — were just among the many reasons that air travel can be stressful for passengers, apart from such issues as turbulence, baggage claim, and costly beverages on the flight.

Although airports in Southeast Asia and Oceania had an average of 34 percent stress levels based on reviews by passengers—the least of any region included in the report—it was still home to some of the most stressful airports in the world, including Naia.

The overstretched gateway had 57.81 percent of its passenger reviews indicating stress.

Based on recent reviews for Naia in Google Maps, among the common complaints left by passengers were the alleged lack of organization, long lines, overcrowding, lack of seats at the departure gates, and delayed luggage release.

Other passengers also pointed out that most, if not all, food stalls and restaurants or cafes inside the airport only accepted cash for payment—which several tourists and passengers found inconvenient.

Another travel website, the widely cited Guide to Sleeping in Airports, described Naia as a “large and often frustrating airport.” It also advised travelers to “expect to wait in numerous long lines as you make your way to your flight.”

Similar to some Google Maps reviews, the website also noted that some shops and restaurants were mainly cash-only, pushing travelers to find ATMs inside the airport.

PCG declares heightened alert for safety of travelers during Christmas