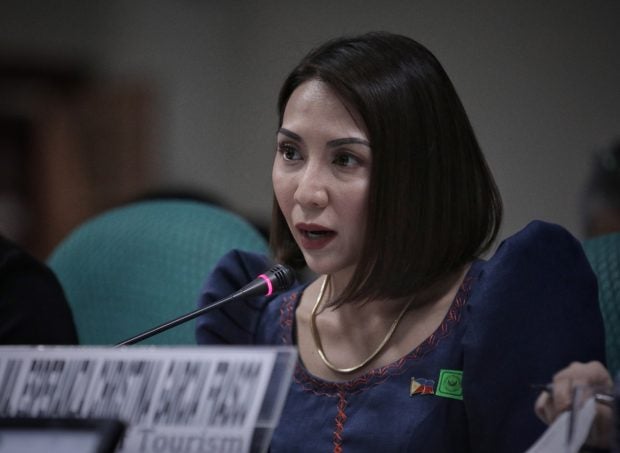 Tourism Secretary Christina Frasco, shown here during a House hearing on Oct. 6, 2022, on the 2023 budget of the Department of Tourism (DOT) and its attached agencies and corporations. (File photo from the Senate Public Relations and Information Bureau)

The DOT recalibrated its goal for 2023 on realizing that it had exceeded its goal of 1.7 million this year, Tourism Secretary Christina Frasco said in a statement issued on Wednesday.

Frasco gave the following breakdown of 2022 visitors by country:

This year’s 2.5 million visitor arrivals account for almost 30% of the industry’s pre-pandemic arrivals data when the Philippines recorded 8.3 million arrivals in 2019.

Frasco said that the new projections were made with consideration of factors such as the ongoing Russia-Ukraine war, rising fuel prices, inflation, and the continued lockdowns in China, which for the longest time had been the top tourist market of the Philippines.

“We look at it with optimism in a sense that our goal is to exceed our conservative projections in the same way that we have been able to exceed it this year,” Frasco said.

“And we feel that we would be able to exceed our pre-pandemic numbers way earlier than the 2025 year that was told to us when we assumed office with the improved policies under the Marcos administration.”

At the same time, Frasco said, the DOT would work to strengthen its collaboration with other government agencies and local governments in developing tourism across the country.

Frasco said she had already signed a formal partnership with the Department of Information and Communication Technology (DICT) to enhance the overall tourist experience at the established tourist centers nationwide.

The partnership aims to provide improved internet connectivity in at least 94 destinations all over the country and more digitized tourism services.

According to Frasco, the goal is to make travel seamless for all travelers.

So the DOT launched the E-arrival pass in coordination with DICT, the Bureau of Immigration, the Bureau of Quarantine, and the Department of Health. The project integrates all the requirements of those agencies into one platform.

“It makes travel as convenient as possible for any Filipino or tourist coming into the country by removing any barriers that would otherwise dissuade tourists from coming into the Philippines,” Frasco said.

The DOT will also enter into a formal agreement with the Department of National Defense (DND) in an effort to open up Mindanao, often perceived as a risky destination, as a tourism wonder.

On the domestic side, Frasco said the DOT and the Department of Labor and Employment (DOLE) had already launched Trabaho, Turismo Asenso!, a program to create more jobs in the tourism sector.

According to Frasco, the program has already aggregated 157 tourism-related companies and offered a total of 8,310 jobs with 9,000 cumulative registrants.

The DOT recently made it to the top three of a Publicus Asia survey of government agencies with the highest approval ratings nationwide.

DOT breaches tourism target with over 2 million travelers to PH