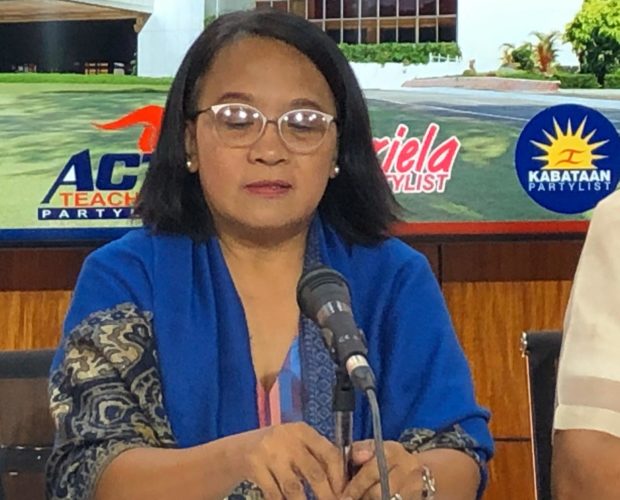 MANILA, Philippines — House Deputy Minority Leader France Castro and other Makabayan bloc lawmakers on Tuesday urged the House of Representatives to investigate the presence of foreign-funded laboratories in the country, including animal disease facilities financed by the United States’ Defense Threat Reduction Agency (DTRA), to ensure that there are no covert military objectives involved in these projects.

The DTRA, an agency under the US Department of Defense (DoD), is the official combat support agency for countering weapons of mass destruction, such as chemical, biological, radiological, nuclear, and high explosives.

In filing House Joint Resolution No. 16, the Makabayan bloc cited the Regional Animal Disease Diagnostic Laboratory (RADDL) in Tarlac City, which was funded by the DTRA to the tune of $643,000 and turned over to the Department of Agriculture (DA) in September 2020.

While its aim is to boost the Philippines’ biosecurity efforts against transboundary animal diseases, the lawmakers urged Congress to look into the extent of such foreign-funded project in the country, noting that “the Philippine government should look at these foreign activities with greater scrutiny than before, as there exists international partners in the civilian sector which can competently provide the same services to our agricultural sector but without the accompanying military risks.”

It pointed out that the task of civilian cooperation on bilateral agricultural concerns lies with the US Department of Agriculture, not with agencies within the American defense department.

It added: “Allowing US DoD agencies to influence civilian agricultural initiatives gives rise to reasonable suspicions on the true objectives of these projects in the Philippines.”

Earlier, the DA said the RADDL in Central Luzon would provide services and tests for trade, disease surveillance and animal health, aside from functioning as a training facility for veterinary clinicians, students and professionals.

The Makabayan lawmakers said the DTRA should “disclose whether there are unspecified military objectives in funding the laboratory” and other facilities in the future, particularly relating to the development of bioweapons.

“The DTRA should also disclose the extent of its continuing involvement in these labs, on whether they are able to mutually determine policies, objectives, programs and activities with Philippine counterparts, or whether its work terminates after turnover to Philippine authorities,” they said.

They stressed that such a disclosure was critical in determining if the United States has covert objectives in undertaking such projects, since the RADDL in Tarlac City is the first in a series of integrated laboratories planned by the DTRA.

Reached for comment, the US Embassy in Manila said: “The resolution is a matter for the Philippine legislature. Regarding the laboratory, we can say that, as with other US partnerships with the Department of Agriculture, the (DTRA) provides support at the invitation of the Philippine government.”

“The DTRA has built, equipped and trained Philippine government personnel to run laboratories to detect, monitor and prevent the spread of animal diseases, but the laboratories are run by the Department of Agriculture,” the embassy’s acting spokesperson, John Groch, said in a statement sent to the Inquirer on Tuesday.

The Makabayan lawmakers also cited reports of other laboratories and research facilities in the Philippines funded by EcoHealth Alliance, a foreign nonprofit organization that received millions of dollars in grants from the US Agency for International Development (USAID).

“Even if the work of EcoHealth Alliance truly relates to pursuing global health, it is unmistakable that one of the overarching objectives of this USAID grant is to advance US foreign policy,” they noted, adding that EcoHealth Alliance also got funding from the DTRA.

They urged the government to “look into the extent of these projects in the Philippines, particularly EIDR, as it is funded both by the DTRA and USAID, both agencies which have various program objectives other than purely scientific research.”

“The national government should ensure that the country is not used as launching zones for geopolitical objectives or worse, biological threats to the world,” Castro said in a statement, pressing the government to review the activities of the DTRA and EcoHealth Alliance in the country.

Castro added: “These projects should also be viewed (in light of) the current moves to expand the areas of the Enhanced Defense Cooperation Agreement and may also pose a threat to our national security and infringe on our sovereignty.”

In June last year, Infrawatch.ph, a public policy think tank focusing on major public infrastructure and development projects in the Philippines, had called on then President Rodrigo Duterte to cancel the biolabs funded by the DTRA for the same potential military risks to the country that the House lawmakers are citing.

‘Ghosts that shape who we are’: The PH genome project