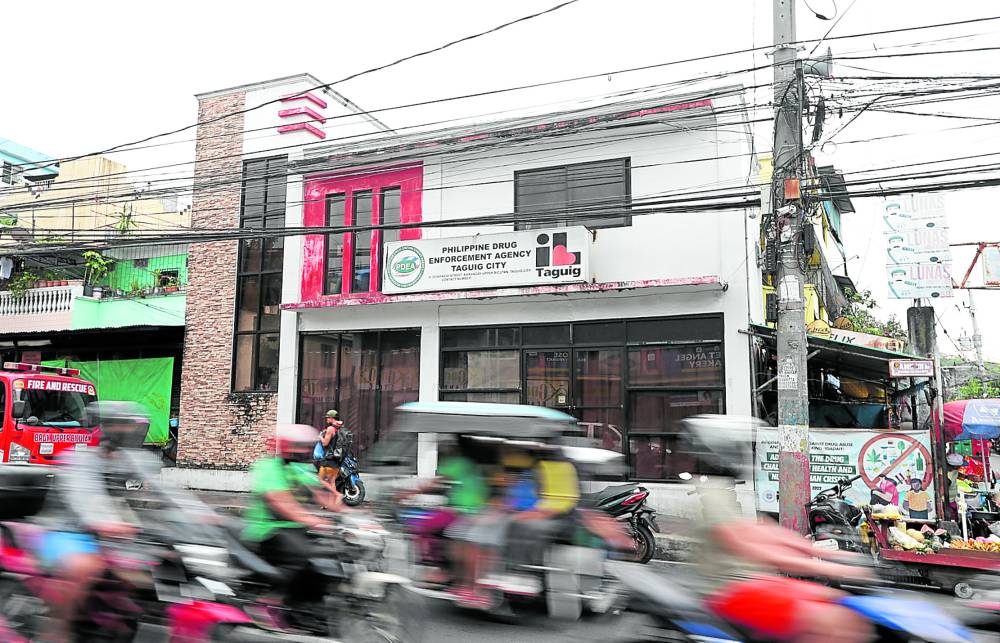 ‘REPUGNANT’ The Taguig government sees this two-story building, which it turned over in 2018 for the PDEA’s use, tainted by the Dec. 6 drug bust and wants the agency out of that property so it could be repurposed. —NIÑO JESUS ORBETA

The city government of Taguig wants the Philippine Drug Enforcement Agency (PDEA) out of its property—a building being occupied by the agency’s South District Office (SDO).

In a statement on Friday, the local government denounced as “a betrayal of the highest order” the alleged involvement of PDEA-SDO chief Enrique Lucero and three of his men in illegal drugs.

It said City Hall had “temporarily” suspended ties with the PDEA following their arrest on Tuesday in a buy-bust operation at their own headquarters.

“The criminal participation of drug enforcers in illicit drug activities, using facilities provided by the city, is repugnant and inexcusable,” the city government said.

It was referring to the two-story building at the corner of General Valdez and A. Bonifacio Streets in Upper Bicutan, which became the SDO’s office in 2018.

At that time, “the city escalated its support to PDEA’s antidrug mandate by turning over for its use [the] newly constructed building,” the statement added.

The district office has jurisdiction over PDEA operations in Taguig as well as the cities of Las Piñas, Makati, Muntinlupa, Parañaque and Pasay, and the municipality of Pateros.

“The city is temporarily suspending its support to and coordination with PDEA pending the outcome of the criminal investigation. The city insists that those involved should be held accountable.”

The four were arrested on the spot by members of the National Capital Region Police Office-Regional Drug Enforcement Unit, after one of the police officers, posing as a drug dealer, bought “shabu” (crystal meth) worth P100,000 from the suspects.

Seized from Lucero and his men were three sachets of the drug weighing 100 grams and another plastic bag containing 1.25 kilos worth P9.18 million.

In September, Lucero—who has been the SDO chief for over a year and has been serving the PDEA since 2008—attended a meeting with Taguig Mayor Lani Cayetano that discussed her antidrug program and other concerns.

The city government on Friday said it “would … demand that the building it has allowed PDEA to use be returned. It will be repurposed for a worthy public use.”

“The city will only resume its support to and cooperation with PDEA once it has shown serious efforts to cleanse its ranks of scalawags,” it added.

As of Friday afternoon, SDO personnel are still occupying the building.

A Taguig City official said an eviction letter would be sent to the PDEA “as soon as possible.”

Reached for comment, PDEA spokesperson Derrick Carreon said the agency’s director for the National Capital Region, Christian Frivaldo, would meet with Taguig officials soon “to thresh out this issue.”

—WITH A REPORT FROM ANGEL YABUT