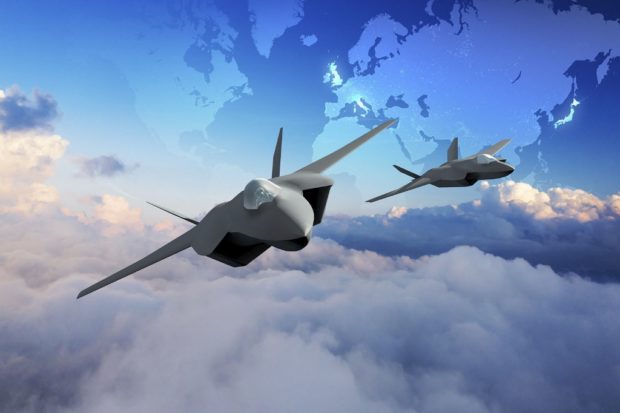 This undated handout image received on December 9, 2022 from the British Prime Ministers Office shows an artist’s impression of what the final design could look like of the aircraft currently known as Tempest. Japan, Britain and Italy announced “an ambitious endeavor to develop a next-generation fighter aircraft by 2035” in a joint statement on December 9. (Photo by Handout / British Prime Ministers Office / AFP)

Tokyo, Japan  — Japan, Britain and Italy said Friday they will jointly develop a next-generation fighter jet in a project that holds scope for future cooperation with allies including the United States.

The new jet, to be ready by 2035, is expected to merge the nations’ current research into cutting-edge air combat technology, from stealth capacity to high-tech sensors.

In a joint statement, the three countries said the “ambitious endeavor” would “accelerate our advanced military capability and technological advantage” at a time when “threats and aggression are increasing” worldwide.

Their announcement was accompanied by a set of images showing an artist’s impression of the sleek new jets flying past Mount Fuji and over London and Rome.

They did not give a cost estimate, but the three countries are already pouring billions of dollars into fighter jet development, efforts that will come together under the joint project, called the Global Combat Air Programme.

“We share (an) ambition for this aircraft to be the centrepiece of a wider combat air system that will function across multiple domains,” the statement said.

That includes “future interoperability with the United States, with NATO and with our partners” in Europe, Asia and worldwide, it explained.

The US Department of Defense said it supported the project in a separate joint statement with Japan’s defense ministry.

“We have begun important collaboration through a series of discussions on autonomous systems capabilities, which could complement Japan’s next fighter program among other platforms,” the US-Japan statement said.

Britain had already been working with Italy on a future fighter jet project called Tempest, launched to great fanfare in 2018.

The objective was to develop by 2035 a twin-engined stealth aircraft that could be operated manned or unmanned, could not be detected by radar, and would boast features such as laser-directed weapons and a virtual cockpit.

Japan’s prior project to build a next-generation fighter plane, named F-X, was reportedly expected to cost more than five trillion yen (around $40 billion).

Friday’s announcement comes with Tokyo poised to make the largest overhaul to its security strategy in decades.

The government plans to ramp up defence spending — a controversial move in a nation whose constitution limits military capacity to ostensibly self-protective measures.

But the war in Ukraine, repeated missile launches from North Korea and growing pressure from China have helped build support for a bigger budget.

Japan’s Nikkei business daily said that companies Mitsubishi Heavy Industries, BAE Systems and Leonardo would oversee the new project, which is Tokyo’s second joint development after its SM-3 missile made with Washington.

The Global Combat Air Programme is the latest high-profile example of allied countries collaborating on an ad-hoc basis to develop defence equipment.

Such moves proved controversial last year when the United States snatched a lucrative contract to supply Australia with submarines from France and launched a new US-UK-Australia alliance in the Pacific, dubbed AUKUS.

Later Friday, Australia’s defense and foreign ministers are due to meet their Japanese counterparts in Tokyo for security talks.

After a meeting between US and Australian ministers this week in Washington, the two countries said they would welcome Japanese troops into three-way rotations, vowing a united front in the face of China’s rapid military advances.