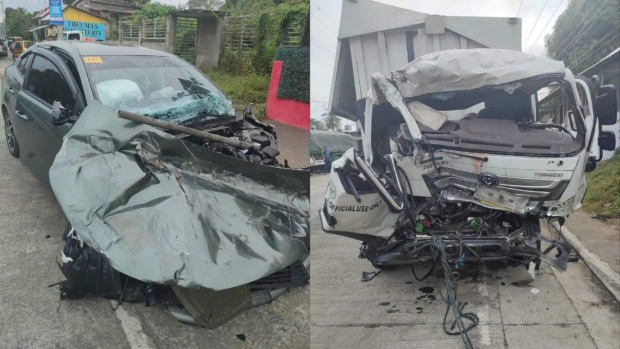 MANILA, Philippines – Two people died and one injured in a car crash after a driver who was under the influence of a liquor collided with a Kadiwa truck while traveling in Barangay Bugallon Proper, Ramon, Isabela on Thursday, according to the Baguio City Public Information Office (PIO).

Inside the Kadiwa DA-CAR truck were Addison Kyle La-ao, Karen Briones and driver Tommy Timoteo. They were were traveling back home to Baguio City after their Kadiwa market encounter in Tabuk City. La-ao and Briones died while undergoing treatment at the Southern Isabela Medical Center Santiago City.

Police report said that the subcompact vehicle crashed with the Kadiwa truck causing it to collide with another truck.

“May the Lord save our driver Timothy. Accordingly, the Kadiwa truck on which the victims were aboard had a head on collision in with a car whose driver was under the influence of liquor. Rest in peace Addison and Karen..our heartfelt condolences to the bereaved families,” Regional Technical Director for Operations of the DA-CAR, Danilo Daguio said in a Facebook post which was shared by the Baguio City Public Information Office.

Meanwhile, the driver of the subcompact was arrested by the police.