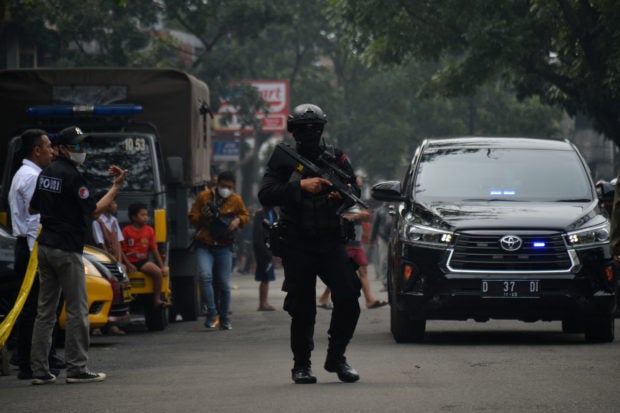 Policeman stands guard at the site of a blast at a police station in Bandung, West Java, Indonesia, December 7, 2022, in this photo taken by Antara Foto. Antara Foto/Raisan Al Farisi/ via REUTERS

JAKARTA — Indonesian authorities said on Wednesday that two people were killed and several others wounded when a suspected Islamic militant carrying a knife blew himself up shortly after entering a police station in the city of Bandung.

Ahmad Ramadhan, head of the public information bureau for the National Police, said Bandung police were coordinating with the counter-terrorism unit to investigate the incident.

The Islamic State-inspired Jamaah Ansharut Daulah (JAD) group may have been behind the attack, Ibnu Suhendra of Indonesia’s counterterrorism agency (BNPT) told Metro TV. He said JAD had carried out similar attacks in Indonesia.

The attack killed the suspected perpetrator and one officer, and wounded eight others, including officers and one civilian, Ibrahim Tompo, a spokesperson for the West Java police, told reporters on Metro TV.

Footage from Metro TV showed damage to the police station, with some debris from the building on the ground and smoke rising from the scene.

Islamic militants have in recent years carried out attacks in the world’s largest Muslim-majority nation, including at churches, police stations and venues frequented by foreigners.

In an efforts to crack down on militants, Indonesia created a tough new anti-terrorism law after suicide bombings linked to JAD.