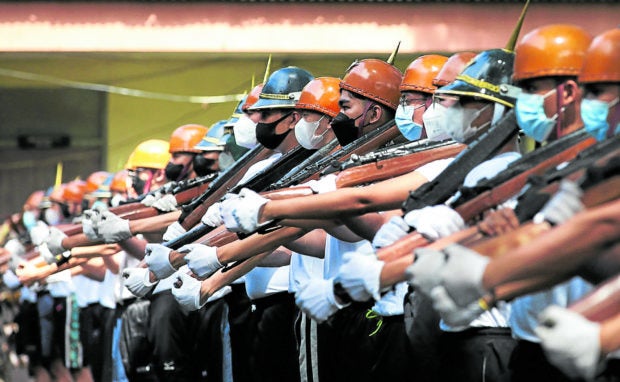 MANILA, Philippines — A joint House panel approved on Tuesday — subject to amendments — a bill that would make the National Citizens Service Training Program (NCSTP) mandatory for all college students and leave the Reserve Officers’ Training Corps (ROTC) as an option.

In a meeting, the House committees on technical and higher education and basic education and culture agreed to consolidate 26 proposed measures, with House Bill (HB) No. 6486 as the mother bill, all pertaining to enhancing the NCSTP and reviving the ROTC.

They also rejected Kabataan party list Rep. Raoul Manuel’s proposal to create a technical working group to reconcile conflicting provisions of the different bills, particularly on whether to make ROTC mandatory or voluntary.

As a result, Manuel withdrew his House Bill 1159, which sought to expand the coverage of and demilitarize the NCSTP and amend Republic Act No. 9163, or the National Service Training Program of 2001. He also asked that he be removed as among the authors of the consolidated bill.

HB 6486, authored by House Speaker Martin Romualdez, Majority Leader Manuel Jose Dalipe, and Tingog Sinirangan party list Representatives Yedda Marie Romualdez and Jude Acidre, sought to “establish a comprehensive system for the training and mobilization of our youth and implement the constitutional vision of drawing them into the mainstream of national life by providing avenues for their participation in public and civic affairs, primarily through the establishment of a mandatory NCSTP in tertiary education and an optional ROTC program in higher education.”

Under the bill, the state would “enhance the capacity of its citizens to mobilize and perform their constitutional duty to render personal military or civil service to the [country] in times of calamities and disasters, national or local emergencies, rebellion, invasion or war” through the NCSTP.

Optional ROTC, on the other hand, would be “designed to produce officers for the citizen armed force and regular force of the Armed Forces of the Philippines.”

In a statement, Assistant Minority Leader and Gabriela women’s party list Rep. Arlene Brosas opposed the revival of ROTC “in the guise of a civilian program that teaches students at the tertiary level weapon handling and citizen soldier training.”

She said that the reason for its scrapping was well-founded — the killing of University of Santo Tomas student Mark Welson Chua who had exposed corruption in the program.

“It is clear that the culture that ROTC propagates is the culture of violence, impunity and corruption, which it seeks to instill in the minds of the youth,” Brosas said of the mandatory program that was scrapped in 2002.

“In Gabriela women’s party, we are firm in our stand that institutionalizing military trainings will never inculcate patriotism among the youth — it will only make young women even more vulnerable to sexual abuse by ROTC officers,” she added, pointing out that with sexual harassment already a major problem in schools, including ROTC in the curriculum could further worsen the vulnerable state of women.

“Love of country can be shown in any field, not only through ROTC. Patriotism is not forced. This comes naturally to us Filipinos,” Brosas said.