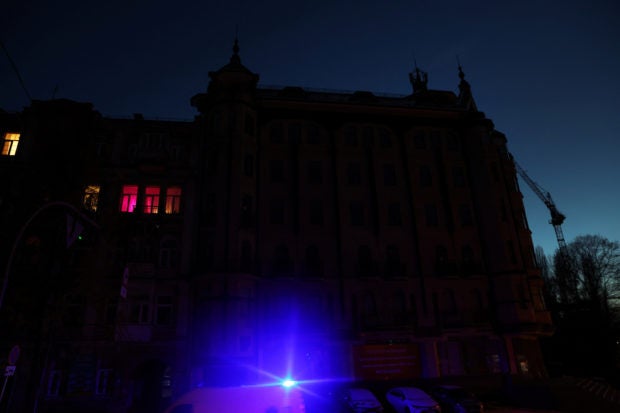 An ambulance drives by a building, as Russia’s attack on Ukraine continues, during power outages in Kyiv, Ukraine, December 4, 2022. REUTERS

About half the region surrounding the Ukrainian capital will remain without electricity for the coming days after Russian missile strikes on power facilities, the Kyiv regional governor said.

The strikes on Monday, which plunged parts of Ukraine back into freezing darkness, were the latest in weeks of attacks hitting critical infrastructure and cutting off heat and water to many.

Kyiv, a city of about 3 million people, appeared to have escaped serious damage. But the Kyiv region, which does not include the capital and which had a population of about 1.8 million before the war, was badly affected.

“In the coming days, about half of the region will be without electricity,” Oleksiy Kuleba, the region’s governor, said on the Telegram messaging app late on Monday.

Moscow denies its intent is to hurt civilians but said their suffering would not end unless Ukraine yielded to Russia’s demands.

DTEK, Ukraine’s largest private energy provider, had to disconnect a facility from the power grid due to damage from Monday’s attacks and said the facility had been a target 17 times in the past two months.

Volodymyr Kudritsky, head of the national power grid operator Ukrenergo, said that Russia had deliberately launched the attacks as the temperature fell below zero.

“A day or two is necessary to restore normal generation in the system,” Kudritsky told Ukrainian television.

Damage was reported in other regions, including in the south and southeast where some of the fiercest fighting between Ukrainian and Russian forces has taken place, prompting warnings of fresh emergency blackouts.

All water pumping stations and reserve lines in the Odesa region lost power and water supply was cut, the water company announced on Telegram.

In Kramatorsk, a city in the Donetsk region under Ukraine’s control, 370 apartment buildings were without heat because of power outages, the city’s mayor said.