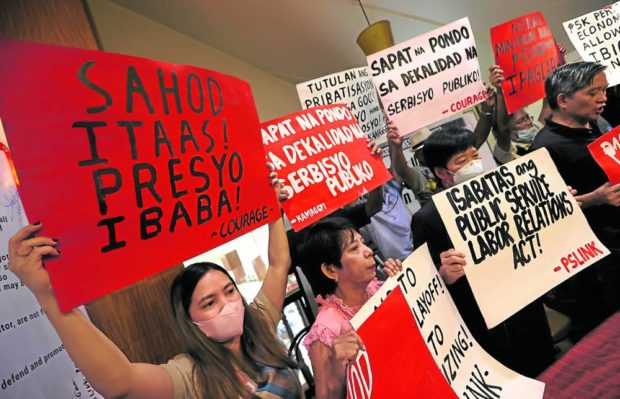 MANILA, Philippines — Barely six months since the last wage hike, a labor group formally petitioned on Monday for an increase in the daily minimum wage in Metro Manila by P100 due to “soaring inflation.”

In a petition, the Kapatiran ng mga Unyon at Samahang Manggagawa (Kapatiran) said the value of wages have been “greatly diminished” by inflation and urged the Metro Manila wage board to set aside the one-year ban against another wage hike after the last round.

“The petition stems from the need of minimum wage earners to recover the lost value of their wages, cope with rising cost of living and afford a dignified life as a common worker,” said Kapatiran chair Rey Almendras, who is also president of the Philip Morris Fortune Tobacco Corporation Labor Union.

Kapatiran said the daily minimum wage rate of P570 in Metro Manila which took effect last June 4 has been overtaken by inflation, which reached 7.7 percent last October and 8.2 percent in November.

The group pointed out that as of last year, the Philippine Statistics Authority has computed the poverty threshold for a family of five at P12,030 a month.

A daily minimum wage earner in Metro Manila who works five days a week would only earn P11,400 a month, which is below the official poverty threshold.

“Evidently, minimum wages fall below this poverty threshold and are way too far from achieving the living wage as provided under the Constitution,” Kapatiran said in the petition.

The Kapatiran leaders were joined by Partido Manggagawa chair Renato Magtubo in filing the petition before the Metro Manila wage board office in Manila on Monday.

While supporting the petition for a P100 minimum wage increase, Magtubo said their labor coalition, Nagkaisa, would continue to call for the repeal of the Wage Rationalization Act that gave wage-setting authority to regional wage boards.

He said Republic Act No. 6727 has to be replaced by “a new law whose mechanisms truly ensure the realization of the living wage guaranteed by the Constitution.”