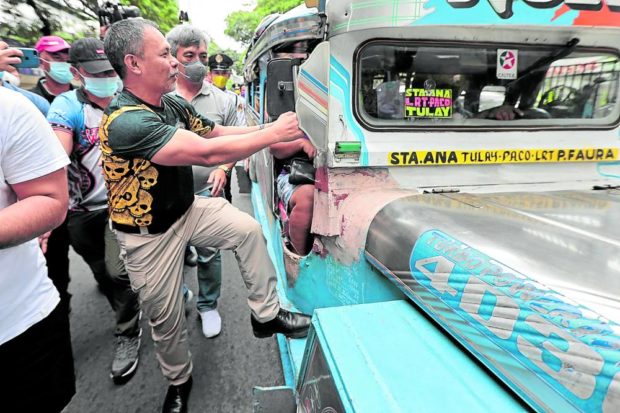 OFF HE GOES | Suspended Bureau of Corrections Director General Gerald Bantag rides a passenger jeepney to get away from reporters hounding him as he leaves the Department of Justice in Manila after attending the resumption of the preliminary investigation into the murder of broadcaster Percival “Percy Lapid” Mabasa on Monday. (Photo by GRIG C. MONTEGRANDE / Philippine Daily Inquirer)

Bantag arrived with his lawyer, Rocky Balisong, at the DOJ in Manila where he filed a motion for inhibition, citing lack of jurisdiction and Justice Secretary Jesus Crispin Remulla’s apparent lack of “impartiality.”

“He has the power to [review] the resolution and substitute the panel’s findings. That’s our fear, so with due respect to the [DOJ] and the investigating panel, we are asking the [DOJ]to inhibit,” Balisong said.

In an interview with reporters, Bantag denied that he was in hiding. “I wasn’t. Finally, they saw that I wasn’t hiding; there is no need for [me] to hide. There is no warrant yet. This has not even reached the court,” he said.

He did not answer questions about the murders but his lawyer said Bantag “generally denied” the allegations.

Balisong said no counteraffidavit was filed during the hearing but a “motion for inhibition because the investigating panel suspended the proceedings pending the resolution of our motion.”

Senior Assistant State Prosecutor Charlie Guhit confirmed that “the submission for the counteraffidavit for DG Bantag will be held in abeyance in the meantime” but said, “upon submission of their comments, then we will resolve the motion.”

Remulla welcomed Bantag’s appearance and hoped that he would “respect the law.”

But he said he would not inhibit from the proceedings. “We will talk about it; it’s not a problem. That’s a very unique motion,” Remulla said.

“We’re the executive department, this is the National Prosecution Service that we’re talking about. We have a duty to the law and the Constitution,” he said.

Mabasa’s brother, journalist Roy Mabasa, said his family would oppose the motion, “because we have the right to,” saying he believes the filing of the motion is part of Bantag’s delaying tactics.

“Each day, every hour that this is delayed is an injustice to the family of Percy,” Roy lamented.

Bantag and his purported right-hand man, BuCor Deputy Security Officer Ricardo Zulueta, whose whereabouts are unknown, are respondents in the consolidated cases for the murders of Mabasa on Oct. 3 and Palaña on Oct. 18.

Bantag, along with Zulueta, was charged as a principal “by inducement” in the murders purportedly over a grudge due to the journalist’s hard-hitting commentaries against him.

Mabasa was shot dead on Oct. 3 by two men on a motorcycle near the gate of the Las Piñas City subdivision where he lived.

Palaña, an inmate at New Bilibid Prison in Muntinlupa City, was found dead on Oct. 18, a few hours after being implicated as one of the middlemen by the confessed gunman, Joel Escorial.