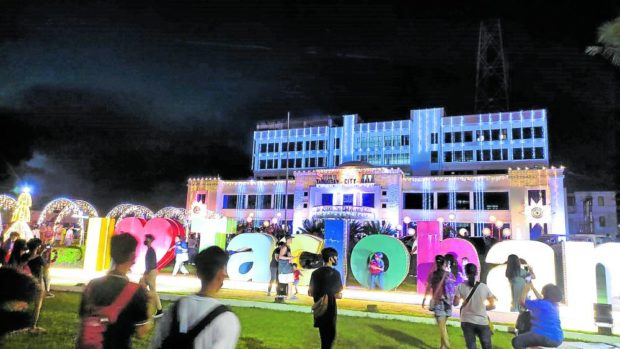 JUST LIGHTS | There is no Christmas tree during this holiday season at the Tacloban City Hall, as shown in the lighting ceremony on Dec. 2, after Mayor Alfred Romualdez decided to do away with it. (Photo courtesy of Tacloban Today)

TACLOBAN CITY, Leyte, Philippines — Mayor Alfred Romualdez of this city has smartened up.

He decided to forgo putting up the huge Christmas tree that used to adorn the City Hall grounds this year because it kept being knocked down by typhoons.

“Perhaps, you are surprised that we don’t have a Christmas tree this year. You know, every time we put up a Christmas tree, we were devastated by typhoons,” he said during the switch-on of the Christmas display at City Hall on Dec. 2.

“So we have decided to just put up Christmas lights and I commended the City Tourism Office for [doing] a good job [in creating the holiday decorations],” he added.

In previous Christmas celebrations, the city government would put up a giant Christmas tree either on the grounds of the City Hall or at Plaza Rizal, the city’s main public plaza.

Romualdez hoped the Christmas lights would not cause an increase in the city’s electric bill.

Power consumers in the city and the rest of Eastern Visayas had been complaining about the high cost of power rates for the past months, ranging from as low as P12 per kilowatt to as high as P19 per kw.

Tacloban had been hit by typhoons during the last months of the year, the strongest of which was Supertyphoon “Yolanda” (international name: Haiyan) which killed at least 2,200 people as well as destroyed houses and buildings across Eastern Visayas on Nov. 8, 2013.