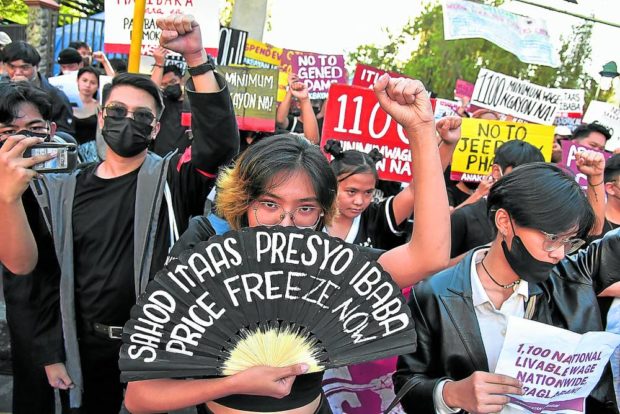 YOUTH ACTIVISM | Students from different universities and colleges in Baguio City stage a rally to raise issues affecting Filipinos as they mark Andres Bonifacio Day on Nov. 30. Many of these young activists are being labeled as communist sympathizers, mostly by state agents, prompting the University of the Philippines Baguio to address the growing concern of red-tagging. (Photo by EV ESPIRITU / Inquirer Northern Luzon)

BAGUIO CITY, Benguet, Philippines — Red-tagging is officially a crisis incident that will automatically trigger an emergency response from the University of the Philippines (UP) Baguio, the university’s new top official here said.

According to UP Baguio chancellor Corazon Abansi, they have expanded the scope of their crisis management committee to include red-tagging as a form of crisis along with natural disasters, occupational safety, and mental health issues.

“We internalized this issue within our policy environment that allows multisectoral representation,” Abansi, who is also a UP scientist, said during her investiture ceremony on Dec. 2, which was led by UP president Danilo Concepcion and the UP Board of Regents.

The UP system addresses emergencies by activating crisis management committees, made up of a constituent university’s staff, the faculty, the student council, and the UP police.

Based on a summary report released by UP Baguio’s crisis committee on Dec. 2, the campus has set up operational response protocols for “natural disasters [which] occur due to natural forces that are often beyond the control of man.”

The report said UP Baguio also responds to “man-made disasters [that] occur due to carelessness caused by human activities regardless of intent, health crises like pandemics, and special concerns over incidents that may directly harm UP employees, students, and other stakeholders.”

It noted that a current part of the “special concern” is red-tagging, where activists or certain individuals were labeled as terrorists or communists by state agencies and their allies.

Last month, an online lecture given by Peale Jon Bondoc, a former major general of the Philippine Army Reserve Command, labeled many educators and organizations as terrorists or communist sympathizers, igniting an uproar from UP teachers, students, and activist groups.

The retired military officer made the remarks when he spoke about the state of national security to 400 freshmen enrolled in the National Service Training Program, which replaced military training under the Reserve Officers’ Training Corps.

Signboards and tarpaulins that arbitrarily brand youth activists and any group as “terrorists” have been banned from Baguio streets by Mayor Benjamin Magalong following a dialogue in March with students who complained that they no longer felt safe because of online and public bullying.

But some students still suffer harassment, often through social media or by telephone.

Earlier on Sept. 27, some local policemen were deployed to secure Saint Louis University after its students and those from UP Baguio received text messages warning that they would be attacked on campus.

On Sunday, some young artists complained that policemen had called them out and asked them to erase their chalk art along the Session Road depicting “Left-leaning” ideas.

But Lt. Angeline Dongpaen, spokesperson for the Baguio City Police Office, said the police officers may have been misunderstood, noting that no harassment took place as claimed by several militant groups.

“The police officer just engaged them in a conversation,” Dongpaen told the Inquirer.

The city public information office also stressed that the local government gave no instructions to regulate any forms of expression that are rendered through pavement art, except pornographic materials or art that advocates violence.

She added: “Together, we envision a resilient university capable of adapting and thriving in a disruptive environment… The parameters of a post-COVID-19 future are still not definite, and the manner in which multiple and unknown variables interact as they move toward equilibrium will not be accurately predicted for some time.”

The investiture ceremony coincided with the 20th anniversary of UP Baguio’s elevation as the 7th constituent university of the UP system.

Abansi also revealed plans to purchase UP land in Benguet province, “given the very limited space of the existing campus.”

“We are exploring the acquisition of a property in the Benguet growth corridor, which will allow us to offer more courses and increase student intake,” she said.

Groups slam latest ‘red-tagging’ at online lecture in UP Baguio