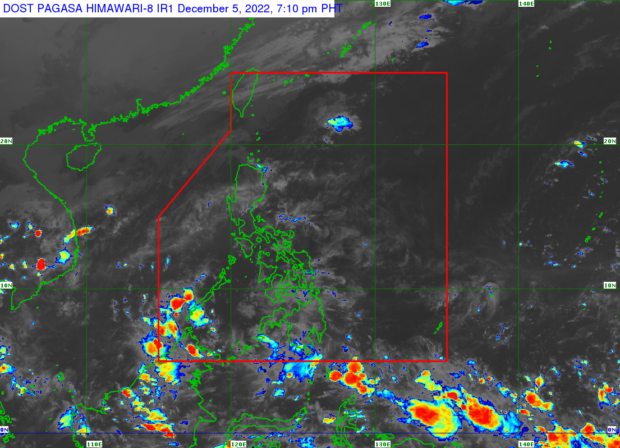 MANILA, Philippines — Some areas in Northern Luzon are expected to see rain on Tuesday, December 6, due to the shear line, as generally fair weather may possibly prevail over the rest of the country.

The Philippine Atmospheric, Geophysical and Astronomical Services Administration (Pagasa) said in its 5 p.m. weather bulletin on Monday that Batanes and Cagayan will experience rain due to the shear line anticipated to bring overcast skies, as well as scattered rain with thunder and lightning.

As for Metro Manila and the rest of Luzon, good weather continues despite partly cloudy to cloudy skies with isolated rain showers or thunderstorms.

(Here in Batanes and Cagayan, let’s expect that due to the possible effect of the shear line, we may experience cloudy skies with scattered showers, lightning, and thunder.)

(But here in Metro Manila and the rest of [Luzon], expect good weather to continue – just partly cloudy to cloudy skies with isolated rain showers or thunderstorms.)

Also, Pagasa said weather would be generally fair over Visayas and Mindanao, although there may be chances of rain due to isolated thunderstorms.

Meanwhile, a gale warning was raised over the extreme Northern Luzon, specifically, the seaboards of Batanes, Babuyan Islands, the Northern Coast of Cagayan, and Ilocos Norte.

Pagasa likewise said that Tuesday’s temperature range in key cities/areas across the country are:

Bicol, 4 other areas across PH to experience rain due to easterlies