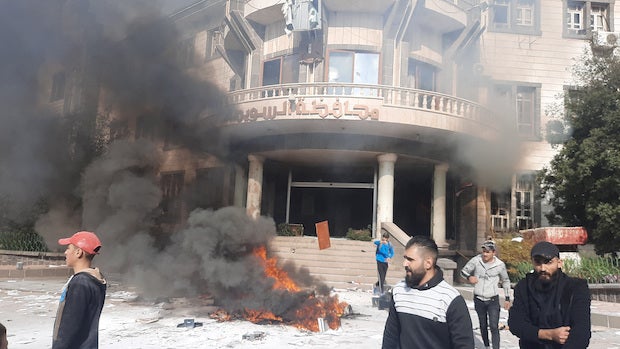 Smoke rises near a building as people take part in a protest in Sweida, Syria, Dec. 4, 2022, in this picture obtained by Reuters. (Suwayda 24 / via Reuters)

AMMAN — Dozens of demonstrators angry over worsening economic conditions in Syria stormed the governor’s office in the southern city of Sweida on Sunday and set fire to parts of the building amid a heavy exchange of gunfire, the authorities and witnesses said.

Earlier, more than 200 people had gathered around the building in the center of the Druze-majority city, chanting slogans calling for the overthrow of Syrian President Bashar Assad, they said, amid spiraling prices and economic hardship.

Three witnesses told Reuters the governor was not in the building which was vacated before protesters stormed the offices.

“The governor’s office was burnt completely from the inside,” said Rayan Maarouf, a civic activist and editor of Suwayda 24, a local website that covers the southern region, who said several people were wounded in the exchange of gunshots.

“There was heavy gunfire,” Maarouf told Reuters, saying it was not clear from where the shooting came in the heavily policed area.

A source in the city hospital said one civilian who was being treated had died from gunshot wounds while another was still in hospital after being shot.

Sweida province has been spared the violence seen in other parts of Syria since the start of the over-a-decade-long conflict that began after pro-democracy protests erupted against Assad’s family ruler were violently crushed by security forces.

The minority Druze sect, whose faith draws its roots from Islam, have long resisted being drawn into the Syrian conflict that pits mainly Sunni rebels against Assad’s rule.

Many community leaders and top Druze religious leaders have refused to sanction enlistment in the army.

Syria is in the throes of a deep economic crisis where a majority of people after a devastating conflict that killed hundreds of thousands and displaced millions struggle to afford food and basic goods.

Witnesses in Sweida told Reuters that once inside the building, demonstrators brought down pictures of Assad.