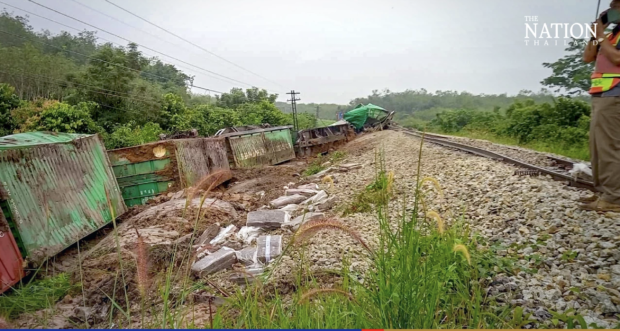 BANGKOK — Train travel on the railway linking Thailand and Malaysia has been suspended as officials investigate a bomb blast that derailed a cargo train early yesterday afternoon, officials from the State Railway of Thailand (SRT) said on Sunday.

The blast derailed 11 of the cargo train’s 20 cars and severely damaged rail tracks in Songkhla province’s Sadao district, police said. The blast occurred at 12.50pm yesterday and was caused by an improvised explosive device, they said.

No one was injured by the blast or derailment.

He said that the SRT would continue to investigate the scene of the blast and evaluate safety on the route.

Panumat Phromchot, a chief engineer at SRT’s rail maintenance division in Hat Yai, confirmed that a team of engineers would investigate the derailed cars and the badly damaged tracks today.

Police speculated that insurgents were behind the blast and that their goal was to deter tourism and damage economic growth, explaining that the governments of Thailand and Malaysia were planning to open the route on weekends for tourists to travel between Hat Yai and Kuala Lumpur.

A trial run on the route on September 16 was well received by tourists.