Love behind bars: the Russian imprisoned poet and his fiancee | Inquirer News

Love behind bars: the Russian imprisoned poet and his fiancee 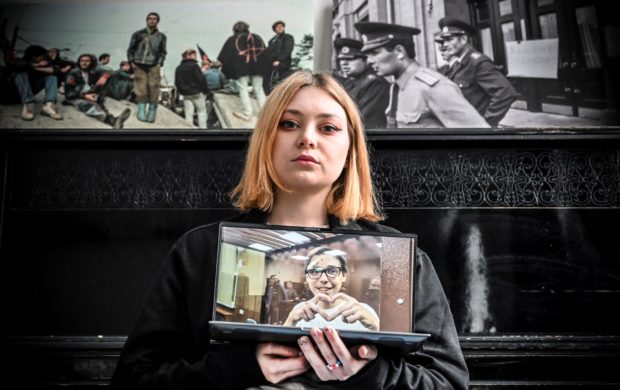 Alexanda Popova, 28, shows a photograph of her jailed boyfriend Artyom Kamardin, 32, during an interview with AFP journalists in Moscow on November 17, 2022. AFP

MOSCOW — In a Moscow prison where he is held for reciting an anti-war poem in public, Artyom Kamardin scribbled some hearts in a letter to his girlfriend Alexandra Popova.

Showing AFP a scan of the letter on her computer, Popova bursts into laughter, pointing at what looks like a potato with legs.

“This is a cat,” her prisoner boyfriend had written next to his drawing.

Popova, 28, giggles looking at it.

She even got the clumsy drawing tattooed on her arm to “keep a bit of Artyom forever” on her body, she said. Unless, she jokes, someone was to “cut her skin off.”

Her boyfriend Kamardin, 32, says police officers raped him when they arrested him for reading out the poem against President Vladimir Putin’s military attack on Ukraine.

Her tattoo and dark humor helps Popova shield herself from the horror unleashed on the couple.

Many families have been torn apart and separated by Putin’s decision to send troops to Ukraine on February 24. Thousands are grieving loved ones, others are painfully separated by military mobilization or forced exile.

As for Kamardin and Popova, it’s the repressive machine that has turned their lives into hell.

They grabbed the poet and took him to a separate room.

There, as he told his lawyer, he was beaten and raped with a barbell.

Popova, meanwhile, said officers had threatened her with “gang rape”, hit her and sprayed superglue on her cheeks and mouth.

Immediately after the detention, Kamardin was forced to film an apology video — a common punishment in authoritarian regimes, but still rare in Moscow.

Popova says her boyfriend has been receiving threats of sexual assault in prison.

The couple has pressed charges and in November Russia’s Investigative Committee said it was checking possible “abuse of power”, according to a document seen by AFP.

Popova remains traumatized by the ordeal.

“I keep thinking that someone is going to kick the door down when I’m at home, that I am being followed or tapped,” she says.

“I know it’s paranoia, that it’s not real, but I have lost any sense of security.”

On the eve of his arrest, Kamardin went to the statue of poet Vladimir Mayakovsky in central Moscow, where dissidents have been gathering since the Soviet era.

There, he recited his poem entitled “Kill me, militia man!” — an insult to pro-Russian separatists in eastern Ukraine.

During his performance, Kamardin also shouted offensive slogans against the imperial “New Russia” project aiming to annex the south of Ukraine.

“His poetry is quite brutal, but he is a very sweet guy,” Popova says.

She has learned the legal article with which Kamardin was charged with by heart, reciting it like a poem: “article 282, part 2, point A.”

It corresponds to “inciting hatred with violence of the threat of its use” and carries a maximum sentence of six years.

They were initially friends but “love is unescapable,” she smiled.

Back then, she worked for the opposition party Yabloko. He was an engineer with a passion for poetry.

They both lived within the Moscow liberal bubble, where politicized artists, journalists and activists mingled.

“It’s a way of life, not simply a hobby,” Popova said.

But their bubble burst when the Ukraine offensive was launched and repression intensified.

Many fled, and thousands of fines and hundreds of prison sentences were handed out to those who denounced the military operation.

Kamardin and Popova were detained at an anti-war protest in spring.

He got fined and she spent 25 days in detention.

Both now want to get married in prison.

This would make it easier for Popova to visit Kamardin, who she has not seen since his arrest.

She was hoping to see him on November 24 at pre-trial detention hearing, where AFP saw her again.

But her hopes were shattered.

Kamardin was transferred to a psychiatric hospital and did not make it to court.

Outside the tribunal, Popova is shaking in the cold.

“I was hoping to see him, to hear him,” she says, sobbing.

It’s late and the young woman lights a cigarette: “I have to go home.”

And she disappears into the night.

Karen Bordador, imprisoned for 5 years, sees the value of her time behind bars