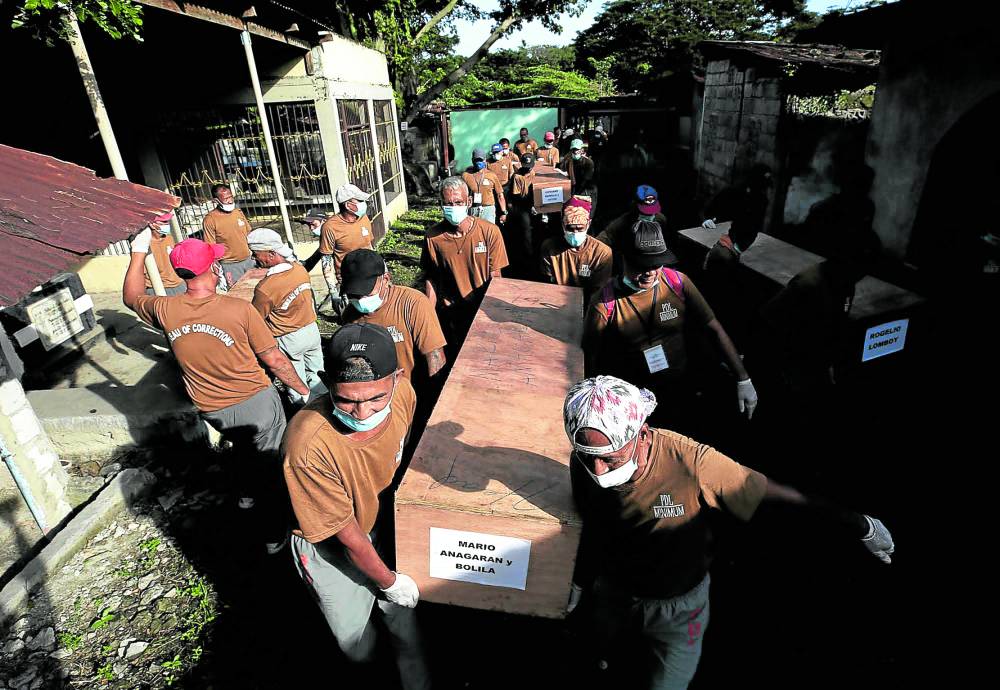 AVOIDABLE LOSS As a third batch of 70 deceased persons deprived of liberty is laid to rest at New Bilibid Prison in Muntinlupa City on Friday, a Bureau of Corrections official laments that many of them could have lived longer with adequate medical attention. —RICHARD A. REYES

Dozens of deaths at New Bilibid Prison (NBP) could have been prevented had the prisoners received proper medical attention for otherwise treatable diseases, a Bureau of Corrections (BuCor) official lamented on Friday after another mass burial of deceased persons deprived of liberty (PDLs).

But only five doctors tend to more than 29,000 prisoners at the national penitentiary, according to Corrections Technical Senior Supt. Ma. Cecilia Villanueva, director of the BuCor’s health and welfare services, who counted herself among the five.

Across the country, she said, the numbers are worse: Only three doctors are available for the six other BuCor prisons, while fewer than 300 nurses tend the sick in those facilities.

Villanueva said it was no wonder that the BuCor could barely provide adequate care for over 50,000 people serving time in the agency’s seven prisons and penal farms nationwide.

“We are doing everything we can. We try to provide health care [for the PDLs] but there are so many constraints. So our hands are tied on how we can offer the best service possible,” she told reporters.

On Friday, a third batch of 70 dead inmates was laid to rest at NBP Cemetery in Muntinlupa City, following the accidental discovery in October of 176 unclaimed bodies that had piled up at Eastern Funeral Services, the lone mortuary authorized to handle deceased PDLs from NBP.

As in the first two services, the dozens of chairs intended for the PDLs’ families were empty, as many of them were too poor or too far away to pay their last respects to their relatives.

That left Villanueva to perform the final blessing on the deceased prisoners, while other PDLs served as the pallbearers who pushed the wooden caskets into their temporary resting place, a multilevel apartment-type tomb, at the cemetery.

“In my 32 years in service, these PDLs have seen me, consulted with me [on their illnesses] and have mingled with me. I treat them as my own family. And it is very heartbreaking to see this many family members being buried all at once,” said Villanueva, who turned emotional during the ceremony.

According to the BuCor, almost all of the 176 PDLs died of natural causes.

Among the top causes written in their death certificates are acute myocardial infarction or heart attack, pneumonia, and cardiorespiratory arrest or the sudden loss of breathing and heart function.

But the BuCor found that many PDLs were suffering from treatable or preventable ailments that may have contributed to early death, such as tuberculosis, diabetes, malnutrition, stroke and ulcer.

Villanueva said 39 of the deceased whose causes of death were initially undetermined had already undergone autopsies performed by the National Bureau of Investigation, which concluded that those had also died of natural causes.

Justice Secretary Jesus Crispin Remulla ordered an investigation on the accumulation of bodies at the NBP-affiliated mortuary. He requested forensic pathologist Raquel Fortun to perform an autopsy on the PDL cadavers to detect any signs of foul play.

Only eight bodies will be initially autopsied by Fortun at the University of the Philippines College of Medicine starting “next week,” Villanueva said.

At first, Fortun had said only around 50 bodies were suitable for autopsy, as the majority of the remains were already in advanced stages of decay with some even appearing mummified. But according to Villanueva, Fortun was “requesting that more recent deaths be autopsied, [those who] died in October.”

Of the unclaimed bodies, about 20 have not been buried while “more than 10” were already claimed by their families, according to the BuCor official.

It was not yet clear what would be done to the remaining cadavers. Per BuCor guidelines, bodies left unclaimed for 90 days shall be interred at the NBP Cemetery.

Under Republic Act No. 10575, or the BuCor Act of 2013, the bureau is supposed to maintain a health personnel-to-inmate ratio of 1:80, which means at least 626 medical workers should be serving in BuCor facilities.

But Villanueva said it was not easy to entice medical professionals to work for the beleaguered BuCor.