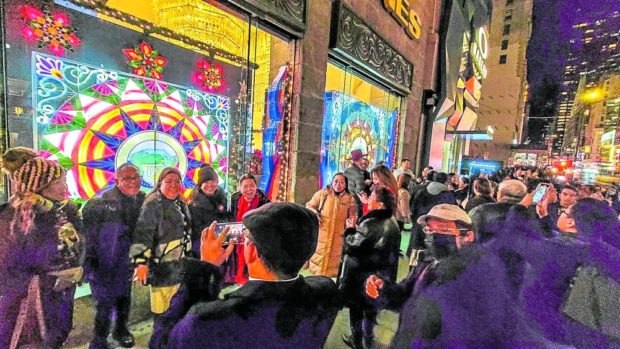 CITY OF SAN FERNANDO—The Philippine Consulate General in New York City lit two big Christmas lanterns from Pampanga province on Thursday to give the Filipino community there a sense of home while allowing Americans to get a glimpse of Filipino Christmas.

The first-ever lighting ceremony of big lanterns at the Philippine Center was headed by Consul General Elmer Cato and graced by Ambassador Antonio Lagdameo, the permanent representative of the Philippines to the United Nations.

“With many Filipinos working in New York, missing their families and friends in the Philippines, during the Christmas season, we wanted to spread a little holiday cheer—the Filipino way—by having our ‘parols’ (lanterns) light up the street outside the Philippine Center,” Cato said in a brief program shown via video on Friday in this Pampanga capital.

He added: “We believe this is the perfect way for thousands of Americans and many others who walk across the Philippine Center to get a sense of how we Filipinos celebrate Christmas.”

In a speech read by Lubao Mayor Esmeralda Pineda, the governor hoped the lanterns would “render their sense of being Pinoys and their sense of home.”

The Bureau of Customs in Clark Freeport helped ship the lanterns to New York City while Pampanga-based businesses, such as Mekeni Food International, Dollarhits, Ihawan Restaurant and Pampangueña Restaurant supported the event, the Inquirer learned.

The lanterns, displayed at the center’s glass facade, will be shown until Dec. 31.

The lantern festival is staged annually here in time for the nine-day Christmas dawn Masses where lanterns illuminate the processions of the images of saints.

But in the past two years, organizers canceled the lantern competition, although it retained the display of lights with scaled-down activities.

Residents and visitors would flock to this city during this time to see large Pampanga-made lanterns dance in sync either to a medley of songs selected by the lantern makers or organizers.

According to the local craftsmen, the rotors of the lanterns are made of aluminum barrels that are connected to a source of electricity, with hairpins or bicycle rods serving as contact points.

Bulbs go on and off in a particular design based on exposed parts of the barrels, and this system was a Kapampangan invention.