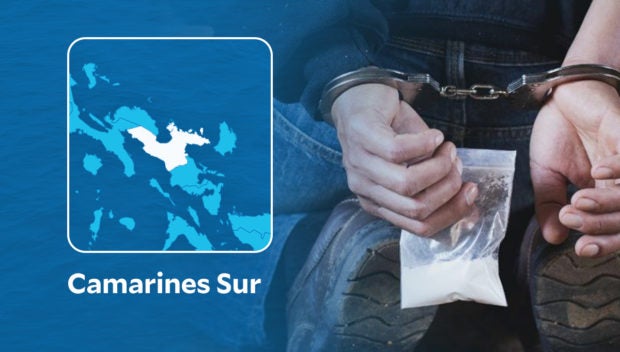 Cruz allegedly sold a sachet of “shabu” (crystal meth) worth P2,500 to an undercover agent in the area.

Authorities recovered from Cruz four sachets of shabu worth P34,000.

At Barangay Pacol in the same city, Janice Amisola, 39, was arrested at around 7 p.m. Confiscated from Amisola were seven sachets of shabu worth P4,500.

In Barangay Concepcion Grande, Ronnie Belleca, 42, and his brother Rex, 32, were arrested at 9:40 p.m. Confiscated from them were six sachets, or three grams, of shabu worth P20,400. Bongon said the two suspects were on the illegal drug watch list.

In Tinambac town, Ryan Jay Barquilla, 22, was arrested around 1:45 p.m. in Barangay Bagacay. Five sachets of shabu, aluminum foil, and other drug tools were confiscated from him.

In Nabua town, Lyndon Benico, 41, was arrested at 8:20 p.m. for selling a sachet of shabu to an undercover agent in Barangay La Purisima.

Domingo said two more sachets of shabu were confiscated during the body search. Benico was previously arrested for illegal drugs.

A sachet of shabu was confiscated from Santos, who had previously been arrested for the same violation.

In Milaor town, Eduardo Delos Santos, 55, was arrested in Barangay Balagbag at 7:20 p.m.

Two sachets of shabu and other drug tools were confiscated from Delos Santos.

The suspects were in the custody of the police pending disposition. INQ