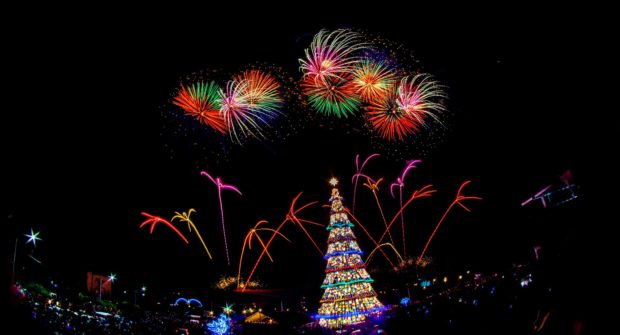 PUERTO PRINCESA CITY — The government of this capital city of Palawan province, which was recently recognized as the “most desirable island” by a London-based travel publication, lit up a 110-foot-tall community Christmas tree on Thursday, Dec. 1, evening to usher in the yuletide season.

City residents came in droves to witness the lighting ceremony at the Balayong People’s Park as the government eased restrictions on mass gatherings due to COVID-19.

“May this Christmas tree serve as a reminder for all of us that the true essence of Christmas is found in the birth of our Savior, who paved the way for the forgiveness of our sins to give us the hope of eternal life,” City Mayor Lucilo Bayron said in his message during the ceremony.

A pyro-musical fireworks display illuminated the night skies of the city during the occasion.

Bayron also laid out his plans for the city’s tourism industry, which, he said, needs a lot of rebranding to attract more visitors.

Four new destinations will also be developed, including the construction of convention centers in the Quito area and the environmental estate in Barangay Sta. Lucia, the development of Acacia Park, and more improvements in Balayong People’s Park.

Bayron also announced that the city would again host the “Ironman” challenge in 2023, 2024, and “and beyond.”

“We will bid to host other sporting events. We will popularize and convert our festivals into international events,” he said, noting that the plan would be realized with the help of the business sector,” Bayron said.

He added: “The business sector will build and operate one- to five-star hotels, establish and operate restaurants, bars, and pubs, and spur and develop the nighttime economy.”

According to Wanderlust, Palawan’s scenery is “heaven on earth” because of its “sparkling waters and white sand beaches.”

“Elsewhere on the island, you can explore one of the world’s longest underground rivers, enjoy a spot of twitching, or fuel up with some delicious cuisine in the island’s capital of Puerto Princesa,” it said. INQ

Palawan cited as ‘Most Desirable Island’ by UK-based travel magazine …