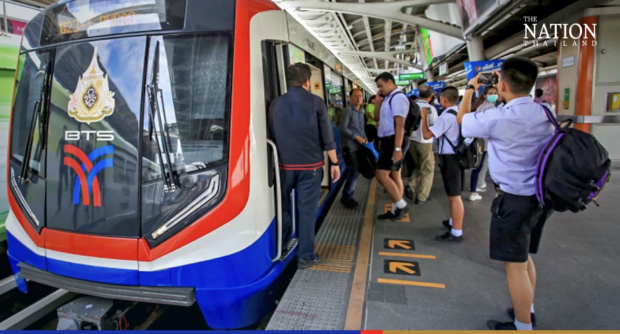 BANGKOK — BTS Skytrain fares on the original Sukhumvit (Mo Chit to On Nut) and Silom (National Stadium to Saphan Taksin and Wong Yai) lines will rise by 1-3 baht from January 1 next year.

The minimum fare (one-station journey) will rise from 16 baht to 17 baht while the maximum (eight stations or more) will go up from 44 baht to 47 baht, train operator Bangkok Transit System Corporation (BTSC) announced on Wednesday.

The price of a one-day pass will also rise from 140 baht to 150 baht from January 1. However, senior-citizen Rabbit Card holders will still receive a discount based on the old fares, said the company.

BTSC chief Surapong Laoha-Unya said the company has increased fares only three times in the 23 years since the Skytrain opened. The last rise was five years ago in 2017, when fares increased from 15-42 baht to 16-44 baht.

“The new fares are still lower than the ceiling price stipulated in the concession contract at 21.52-64.53 baht,” Surapong said.

He cited global inflation, as well as rising electricity costs and minimum wages, as reasons for the latest fare hike.

Fares for Skytrain extension lines overseen by the Bangkok Metropolitan Administration (BMA) will not be affected. The BMA manages the routes from On Nut to Kheha, Mo Chit to Khu Khot, and Wongwian Yai to Bang Wa stations.

Makati subway to connect to Skytrain