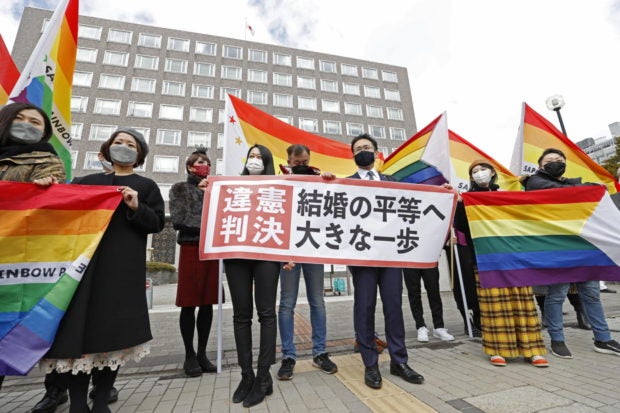 Plaintiffs’ lawyers and supporters show a banner that reads ‘Unconstitutional decision’ after a district court ruled on the legality of same-sex marriages outside Sapporo district court in Sapporo, Hokkaido, northern Japan March 17, 2021, in this photo taken by Kyodo. Mandatory credit Kyodo/via REUTERS

TOKYO — A Japanese court will decide on Wednesday whether bans on same-sex marriages are constitutional, a ruling that could set the future course of LGBT rights in the only G7 nation that does not allow such unions.

Japan’s constitution defines marriage as based on “the mutual consent of both sexes,” and the ruling party of Prime Minister Fumio Kishida has disclosed no plans yet to review the matter or propose legislation.

Of two cases on the issue decided in Japan, one ruled banning same-sex marriage was “unconstitutional” and the other held the opposite.

That adds weight to the expected decision by the Tokyo district court – already influential because of the capital’s outsized influence on the rest of Japan – as it will establish a trend, lawyers and activists say.

“If two district courts rule the ban is unconstitutional, that means multiple courts have said the same thing,” said Hajime Yamamoto, a professor of public law at Keio University.

A growing number of favorable legal verdicts would eventually pressure lawmakers to make changes to the law, he added.

“That will be a voice that cannot be ignored.”

Eight people are involved in the case to be decided on Wednesday, saying the ban on same-sex marriage contravenes Japan’s constitution and demanding damages of 1 million yen ($7,200) each.

Japan does not permit same-sex couples to marry or inherit each other’s assets, such as a house they may have shared, and gives them no parental rights to each other’s children.

Though partnership certificates from municipalities now cover about 60% of the population in Japan, including Tokyo, they do not give same-sex couples the same rights enjoyed by heterosexual couples.

The situation is also having an economic impact, as international companies find it hard to attract, and even more, retain, talent.

“Thinking about the future of their lives, they don’t see anything in Japan. So they move to more friendly jurisdictions, like the United States,” said Masa Yanagisawa, head of prime services at Goldman Sachs and a member of the activist group Marriage for all Japan.

“We’ve been investing into the person to have a senior role, but then they move … All that talent ends up leaving the country because of the social system.”