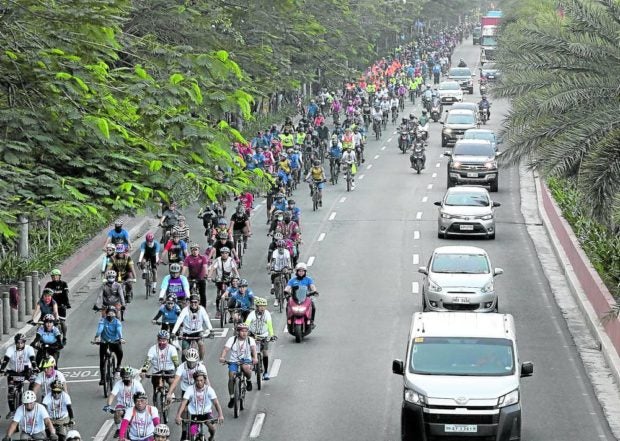 GOOD EXERCISE FOR THE PLANET Hundreds of cyclists pass along Roxas Boulevard on Sunday, as they complete a 50-kilometer ride to mark National Bicycle Day, for which the theme this year is “Clean Air through a Bicycle Friendly Philippines.” —RICHARD A. REYES

MANILA, Philippines — Transport advocates called on the government to invest more in road infrastructure that would ensure the safety of cyclists and put an end to the “deadly” two-wheeled travel in the country.

Ann Angala, co-founder of the Bikers United Movement, said that while government support for cyclists was still in its “infancy stage,” it was better than the situation before the pandemic when there were almost no initiatives for bikers.

“At least now we already have bike lanes; there’s a real estate where [cyclists] can say ‘this is ours and this is where we can be safe,’” she told reporters on Sunday during the celebration of the National Bicycle Day at Ayala Tower One in Makati City.

Angala said the problem of bikers was more on safety and since many schools were starting to reopen, “hopefully we could be more confident that our kids can bike safely on the roads.”

Streets have become “death traps” for people on bicycles, according to the Move As One Coalition. Citing data from the Metropolitan Manila Development Authority (MMDA), the group said 130 people died while 6,405 were injured from 2017 to 2021 while cycling in the National Capital Region.

“For the past five years, an average of 26 people on bicycles died and 1,281 suffered injuries every year,” it said.

Transportation Undersecretary Steven Pastor recalled that in 2020, when the Department of Transportation (DOTr) received funding under Bayanihan 2, it did not have an active transportation team dedicated to introducing programs for active mobility.

“There were five members from other offices that we tapped so we can have initiatives on bike lanes and I’m proud to say that it has grown significantly to 30 members now,” he said.

He noted that more than three years ago, there was “less support” from the national government on active transportation but through DOTr, the country now has 564 kilometers of bike lanes nationwide.

Aside from the upgrade and maintenance of existing bike lanes, Pastor said the DOTr intends to expand to another 234 km of bike lanes across eight regions, construct speed tables (midblock traffic calming devices) and a bike bridge and develop a bike share system.

“Just like the private vehicles, our cyclists also have a right on our roads … they are vulnerable as compared to our motorists so it’s incumbent for the government to provide proper infrastructure for their safety,” he said.

The DOTr official further appealed to the private sector to help in building end-of-trip facilities like showers or changing rooms for employees who bike to work.

Pedaling into the new normal: Bicycles take a slow, but expanding road in PH