Russia to bar foreigners from using its surrogate mothers–lawmaker 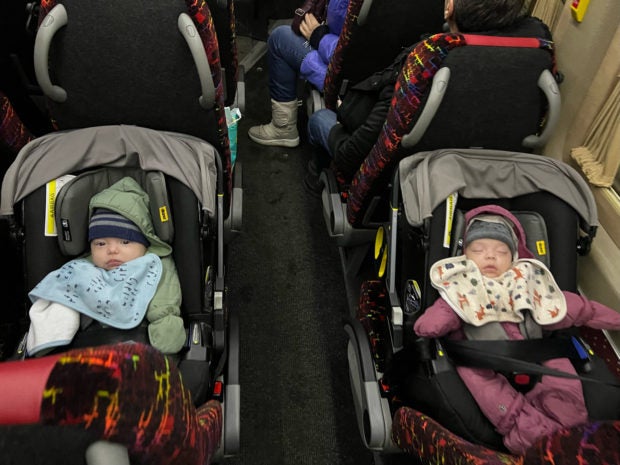 This handout image courtesy of Project DYNAMO shows the twin babies sleeping in a bus after being returned to their American parents, in Saint Petersburg, Russia, November 23, 2022. – Two American babies born to a surrogate mother from Donbass and evacuated to Russia were brought Tuesday from a St. Petersburg orphanage and returned to their US parents, the private group behind the operation, Project Dynamo, said Wednesday. AFP

Russia will soon adopt a law barring foreigners from using Russian surrogate mothers, Vyacheslav Volodin, the speaker of the lower house of parliament said on Sunday, the nation’s Mother’s Day.

Paid surrogacy is legal in Russia, but the practice has been criticized by religious groups as commercializing the birth of children.

“Everything must be done to protect children by prohibiting foreigners from using the surrogacy service,” Volodin said on the Telegram messaging app. “We will make this decision at the beginning of December.”

He said some 45,000 babies born by surrogate mothers have been taken abroad in the past few years. “Child trafficking is unacceptable,” he added.

Russian lawmakers passed the bill nearly unanimously in its first reading in May. If passed in the final third reading, it will be reviewed by the upper house of parliament and signed into law by President Vladimir Putin.

The Ukrainian government says Russia has forcibly deported more than 12,000 Ukrainian children since invading its neighbor in February, while 440 have died in the war and hundreds are missing.

Russia denies forced deportations, saying the movement of people into Russia from Ukraine has been to protect civilians from Ukrainian soldiers.

Putin met on Friday with a carefully selected group of mothers of Russian soldiers sent to fight in Ukraine telling them their sons had not died in vain.

Joel Cruz in Russia to welcome third set of twins