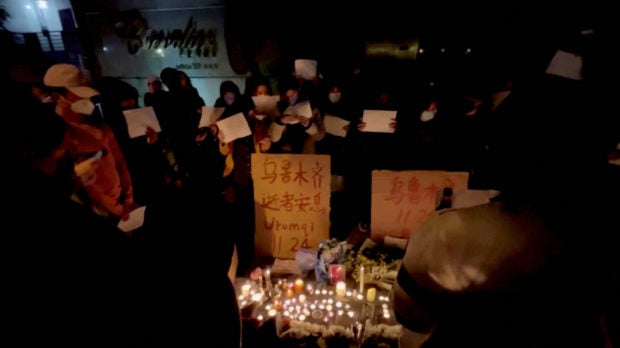 People hold signs and light candles during a vigil held for the victims of the Urumqi fire, in Shanghai, China November 26, 2022 in this picture obtained from a social media video. Gao Ming/via REUTERS

SHANGHAI — Protests simmered in Shanghai early on Sunday, as residents in several Chinese cities, many of them angered by a deadly fire in the country’s far west, pushed back against heavy COVID-19 curbs nearly three years into the pandemic.

A fire on Thursday that killed 10 people in a high-rise building in Urumqi, capital of the Xinjiang region, has sparked widespread public anger as many internet users surmised that residents could not escape in time because the building was partially locked down, which city officials denied.

In Shanghai, China’s most populous city and financial hub, residents gathered on Saturday night at the city’s Wulumuqi Road – which borrows its name from Urumqi – for a vigil that turned into a protest in the early hours of Sunday.

At one point a large group began shouting, “Down with the Chinese Communist Party, down with Xi Jinping, free Urumqi!”, according to witnesses and videos, in a rare public protest against the Chinese leadership.

A large group of police looked on and sometimes tried to break up the crowd.

China is battling a surge in infections that has prompted lockdowns and other restrictions in cities across the country as Beijing adheres to a zero-COVID policy even as much of the world tries to coexist with the coronavirus.

China defends President Xi Jinping’s signature zero-COVID policy as life-saving and necessary to prevent overwhelming the healthcare system. Officials have vowed to continue with it despite the growing public pushback and its mounting toll on the world’s second-biggest economy.

Videos from Shanghai widely shared on Chinese social media showed crowds facing dozens of police and calling out chants including: “Serve the people”, “We don’t want health codes” and “We want freedom”.

Some social media users posted screenshots of street signs for Wulumuqi Road, both to evade censors and show support for protesters in Shanghai. Others shared comments or posts calling for all of “you brave young people” to be careful. Many included advice on what to do if police came or started arresting people during a protest or vigil.

Shanghai’s 25 million people were put under lockdown for two months earlier this year, an ordeal that provoked anger and protest.

Chinese authorities have since then sought to be more targeted in their COVID curbs, but that effort has been challenged by a surge in infections as China faces its first winter with the highly transmissible Omicron variant.

While low by global standards, China’s case numbers have hit record highs for days, with nearly 40,000 new infections reported by health authorities on Sunday for the previous day.

On Friday night, crowds took to the streets of Urumqi, chanting “End the lockdown!” and pumping their fists in the air after the deadly fire, according to videos circulated on Chinese social media.

Many of Urumqi’s 4 million residents have been under some of the country’s longest lockdowns, barred from leaving their homes for as long as 100 days.

In Beijing, 2,700 km (1,700 miles) away, some residents under lockdown staged small protests or confronted local officials on Saturday over movement restrictions, with some successfully pressuring them into lifting the curbs ahead of a schedule.

A video shared with Reuters showed Beijing residents in an unidentifiable part of the capital marching around an open-air carpark on Saturday, shouting “End the lockdown!”

The Beijing government did not immediately respond to a request for comment on Saturday.

The next few weeks could be the worst in China since the early weeks of the pandemic both for the economy and the healthcare system, Mark Williams of Capital Economics said in note last week, as efforts to contain the outbreak will require additional localized lockdowns in many cities.

Protests vs lockdowns erupt in Xinjiang, Beijing after deadly fire