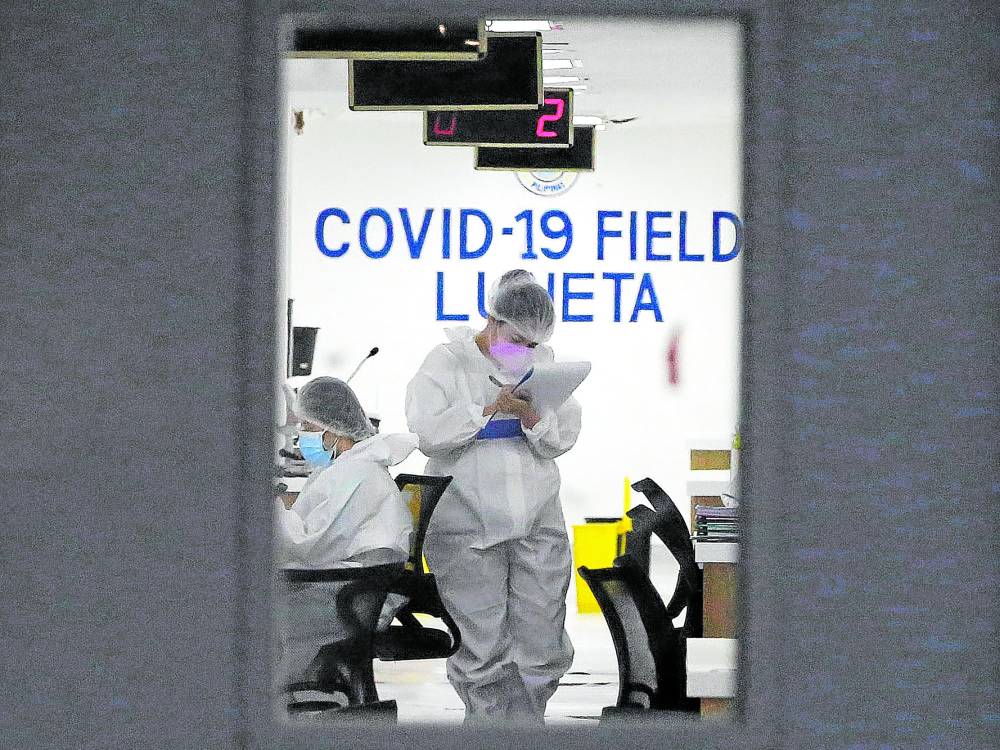 Hundreds of health-care workers on Thursday staged a “day of protest” against low wages and government inaction on the overdue payment of their mandatory pandemic benefits.

Members of unions under the Alliance of Health Workers (AHW) marched to the Department of Health (DOH) head office in Manila where they staged a noise barrage to demand a P33,000 monthly minimum wage for both government and private medical workers and to press for the immediate release of their COVID-19 allowances.

A similar wage demand was made by other government workers earlier this week.

AHW members in the cities of Bacolod, Iloilo, Cebu and Baguio also staged their own protest actions.

“It is about time [President Marcos] prioritizes the increase of our salaries, especially nowadays that our low salaries are no longer enough to compensate for our daily expenses due to high inflation rate,” said Ernesto Bulanadi, president of the Tondo Medical Center Employees Association-AHW.

He pointed out that a government health-care worker with a Salary Grade 1 position gets a monthly pay of only around P12,000, which is barely above the minimum pay of workers in Metro Manila.

Bulanadi said that amount in monthly pay was hardly enough to pay for basic commodities whose prices are fast rising.

To help them cushion the impact of soaring prices, he said that it was only “appropriate and just” for them to demand a minimum pay hike.

“It’s unfortunate that we had to take these demands to the streets just to hear our clamor for a better life for health-care workers,” Bulanadi said.

Citing data from the Ibon Research Foundation, AHW said the P570 daily minimum wage in Metro Manila, the highest in all 17 regions, was way below the living wage standard.

A family of five should receive at least P1,133 per day “in order to live decently,” or P33,990 per month, according to Ibon’s latest estimates.

The 2021 Family Income and Expenditure Survey (the latest) by the Philippine Statistics Authority shows that the poverty threshold is a monthly income of P12,030 for a family of five. This means a family of five that earns around this much or lesser is considered poor and will “not be able sufficiently meet the basic food and nonfood needs.”

The protesters also pointed out that private and local government hospital employees have yet to receive their One COVID-19 Allowance (OCA) for the first half of 2022, while the health emergency allowance, or HEA, for July-December 2021 and July-November this year has yet to be released.

The amounts of monthly pandemic allowances, depend on the risks they are exposed to: P3,000 for low-risk areas, P6,000 for moderate-risk areas and P9,000 for high-risk areas.

OCA was replaced by HEA under Republic Act No. 11712 passed in April this year. The law grants “mandatory continuing benefits and allowances” to private and government health-care workers for the duration of the pandemic and future national health emergencies.

Cristy Donguines, president of Jose Reyes Memorial Medical Center Employees Union-AHW said many health-care workers were resigning and seeking jobs abroad where they are “well compensated, while we health workers who chose to stay are still neglected and abandoned by this government.”

“We don’t deserve to beg for these benefits as these were already provided by law in due recognition of our historical role in battling this pandemic,” she said.

Public health workers also called on the DOH to distribute their performance-based bonuses from 2020 to 2021.

“We call on the DOH and the Marcos [administration] to be true to their word in calling us modern-day heroes by resolving our miserable state. We have been deeply demoralized by the failure and negligence of the past government in addressing our just demands,” said AHW national president Robert Mendoza.

Karen Faurillo, president of the All Workers Union-Manila/Philippine General Hospital, said health-care workers sorely needed the COVID-19 benefits because of the “grim reality that we have a measly salary.”

Health facilities are burdened with red tape in submitting documents and liquidation reports “to ensure timely release” of these benefits.

But the DOH said that they should coordinate closely with its regional offices and comply with all the requirements following government auditing rules to avoid delays in the HEA releases.

The DOH earlier said that the funding for the COVID-19 benefits for health workers under the National Expenditure Program was “insufficient.” The health agency would need at least P141 billion more to cover the payments for the whole of 2023 and those unpaid over the past two years.

Other demands raised by the protesters included ending contractualization and regularization of all health-care workers, prioritizing the budget for health and allotting the equivalent of 10 percent of the gross domestic product to it, removing the tax on the pandemic allowances and hiring more health-care workers.