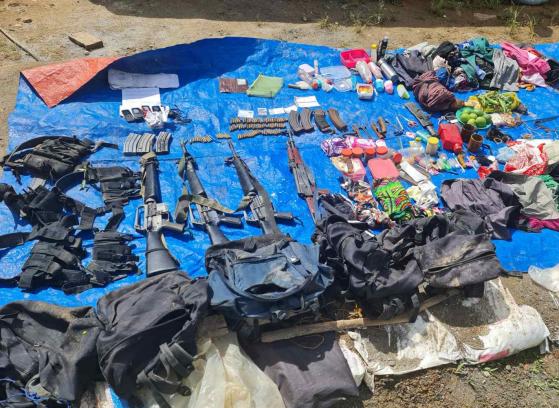 The rebels’ firearms and personal belongings. CONTRIBUTED PHOTO (From the Army’s 603rd brigade)

Lt. Col. Frederick Chicote, Commanding Officer of the 7th Infantry Battalion, said his troops figured in a 24-minute firefight with around 10 NPA members.

No casualties were reported on the government side, the Army said.

Brig. Gen. Arturo Rojas, acting chief of the Western Mindanao Command (Westmincom), said the recent clash showed that the capabilities of the guerrilla forces had been “significantly degraded.”

In a military report, Maj. Gen. Roy Galido, commander of Joint Task Force Central, said a series of encounters had transpired at Sitios Sandigan and Mudti of Barangay Chua before the clash. With reports from Edwin O. Fernandez and Julie Alipala, Inquirer Mindanao