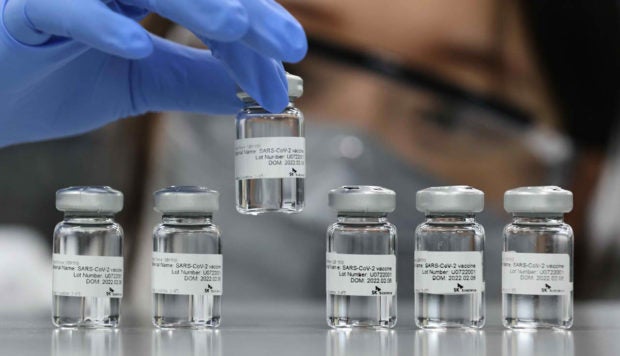 SEOUL — The production of the country’s first homegrown COVID-19 vaccine was indefinitely suspended Tuesday, amid the slowdown in demand for vaccines tailored to combat SARS-CoV-2, the original strain of coronavirus.

However, despite the suspension of final products, the vaccine bulk — the liquid base materials used as main ingredient of vaccines — are still in production, a SK Bioscience spokesperson said.

“The production of finalized vaccines has been suspended, with no additional orders from the government,” the official told The Korea Herald.

“However, the vaccine bulk is still being produced. (With the bulk,) we are currently waiting for the next orders of SKYCovione from the government,” he added.

SKYCovione, an outcome of joint efforts made by SK Bioscience and the University of Washington Antigen Design Research Institute, is a recombinant protein-based COVID-19 vaccine incorporated with global drugmaker GSK’s pandemic adjuvant, developed to vaccinate people against the original coronavirus strain.

The Ministry of Food and Drug Ministry approved the drug’s use for booster shots against the coronavirus in September, in addition to its use in primary inoculations.

The vaccine helped the country to become the third nation in the world with a homegrown COVID-19 treatment and a domestically developed vaccine, following the United Kingdom and the United States.

However, with its main aim to combat SARS-CoV-2, the vaccine was proven to be less effective in vaccinating people against coronavirus variants than updated vaccines from global vaccine makers such as Moderna and Pfizer.

SKYCovione vaccines therefore became widely unpopular as multiple variants came forth — logging accumulated administrations of 3,787 shots (0.6 percent) as of Wednesday, out of total of 600,000 doses released into hospitals.

Meanwhile, accumulated shots of 1.5 million for Moderna shots, 750,000 for Pfizer and 23,156 for Novavax were made, according to the Korea Disease Control and Prevention Agency.

Whether or not the government would be willing to buy more SKYCovione vaccines is unclear. In March, the government purchased 10 million doses of SKYCovione, but no additional orders have been made since.

Amid the lukewarm market demand, for the company’s plans going forward, the SK Bioscience official said that SKYCovione was awaiting approval for usage outside the country.

“We are in the process of having the vaccines licensed for overseas sale,” he said.

SK Bioscience had previously applied for conditional approval of SKYCovione to the Medicines and Healthcare Products Regulatory Agency in the UK and the European Medicines Agency in July, aiming to export the vaccine to low-income countries in Africa and Latin America.

The company had further applied for an emergency use listing with the World Health Organization in September, aiming to distribute its COVID-19 vaccine to the global market through COVAX, a worldwide initiative to guarantee equitable access to COVID-19 vaccines for everyone on Earth.

However, applications for SKYCovione’s usage outside the country are still pending.