'That was my daughter': parents grapple with loss from deadly Java quake | Inquirer News 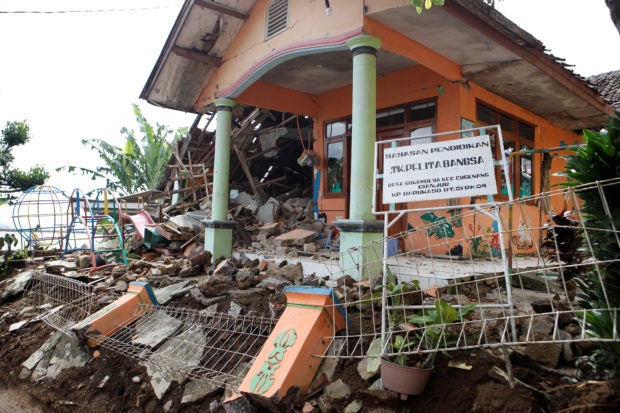 CIANJUR, Indonesia — In the aftermath of Monday’s deadly quake in the Indonesian province of West Java, Rian Solihat had run straight to her daughter’s school only to find it had become a tumble of brick, torn books and lopsided palm trees.

Trawling through the debris, a teacher asked whose child had worn pink to school that day.

“It turned out that that was my daughter,” said Rian, her face stricken with grief at the loss of her 8-year-old child, Vira.

At Tarbiyatussibyan Al Badruniyah Islamic school in Cianjur, Vira was among 20 students killed when the 5.6-magnitude quake shattered the town, reducing some homes and schools entirely to rubble.

The quake hit just after 1.30 p.m., when many children were about to start their lesson in the Islamic school. Officials said the timing had made the children especially vulnerable.

So far, 268 people have been confirmed dead in the disaster, many of them children, with at least 151 people still missing.

“I couldn’t handle it, seeing my daughter’s condition; her body and face were all injured,” said Vira’s father, Ujang Nurdin.

Days later he was still clutching a framed school photograph of Vira that showed her in a black graduation hat, proudly holding a green scroll.

His daughter had dreamed of being a teacher, he said, and Monday had been her first day back at school in two months after recovery from an injury that had left her unable to walk.

Her best friend, 8-year-old Anisa, had been pulled from the rubble still breathing and was rushed to the local health centre, only to be pronounced dead on arrival.

“She was a good girl. Whenever we asked her to pray, she would pray …. She was kind and pious,” said Anisa’s mother, Lala Latifah.

Indonesia is one of the world’s most earthquake-prone countries. It frequently records earthquakes offshore that are stronger than the one that hit West Java.

But Monday’s quake, followed by more than 160 aftershocks, was more deadly because it struck in a densely populated area and at a shallow depth of just 10 km (6 miles).

Officials have also said many died when they were caught under collapsed structures. President Joko Widodo called for reconstruction efforts to include quake-proof housing.

“When the quake happened, the school building suddenly collapsed; the second floor just caved in,” said Siti Maemun, a Koranic recital teacher at the school.

“Everyone was crying, panicking, and you could hear voices everywhere, trapped in the rubble,” he said.

More than 1,000 people had been injured and 58,000 displaced while 22,000 houses had been damaged, the disaster agency said. Local officials have said 142 schools were damaged.

“I wanted to help but I couldn’t. It was difficult for me to stand,” said Nayla, 15, a student who managed to escape from the school. “The children inside were asking for help. It was really sad.”