Cambodia, Thailand agree to clear all mines in border areas 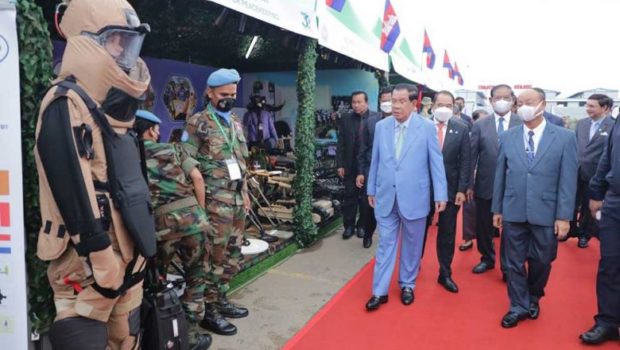 PHNOM PENH — At the closing ceremony of the exhibition celebrating the 30th anniversary of mine action in Cambodia, held in Phnom Penh on November 22, Prime Minister Hun Sen instructed provincial authorities on the Thai border and relevant institutions to clear all remaining explosives.

The premier called on all relevant authorities to work with the Thai side on demining before border issues could be discussed at a later date.

“Thai Prime Minister Prayut Chan-o-cha and I have already agreed on demining along the border, to clear areas where there are mines, regardless of border issues as defining the demarcation line can be done later,” Hun Sen said.

He added that while in the past Cambodia had made such requests to the Thai side without response, this time Prayut had raised the matter during discussions with him at the 40th and 41st Asean Summit earlier this month.

Hun Sen said Prayut had stated that there were still more than 40 square kilometers to clear on the Thai-Cambodia border.

Cambodia has cleared all landmines from its frontiers with Vietnam and Laos.

“Prayut Chan-o-cha said that now there are more than 40 sq km of land with mines or suspected to contain mines, so we need to remove them all before resolving the demarcation line issue later.

“To ensure people’s safety, we can work together to decide which areas Thailand clears and which Cambodia clears,” Hun Sen said.

The number of casualties from landmines and unexploded ordnance (UXO) had dropped sharply from 4,320 cases in 1996 to less than 100 per year over the past decade, he added.

The prime minister also said that while the Kingdom still needed help from friends, Cambodia could itself set goals for funding to support demining activities.

To date, more than $18 million has been received from donors, with around $10 million used to clear mines in target areas and some $8 million remaining.

“I feel that with the Covid situation improving, there may be a reduction in people affected and needing support, which can be directed to funding demining.

“So we can ensure the mine action is not affected by any lack of funds because we need Cambodia to be landmine free by 2025,” Hun Sen said.

The prime minister said “without commitment we will not be able to clear all mines from Cambodian territory” as he called on the Kingdom’s philanthropists to help their country.

“When we can end the mine problem in Cambodia, it will be one of our great successes after the country suffered so much.

“The war is over, but the curse of mines is not. I have also raised the issue with the US president,” he said.

Ly Thuch, senior minister and first vice-president of the Cambodian Mine Action and Victim Assistance Authority (CMAA), said at the ceremony that clearing mines and explosive remnants of war (ERW) began after liberation day in 1979.

Large-scale demining efforts then began in 1992 with a complete mine action program, with the Kingdom having found and destroyed millions of landmines and ERW over the past 30 years, turning “mined land” into “golden land”.

“As we all know, mine action is not just a technical undertaking, it also comes from the heart.

“The commitment and dedication of demining workers stems from their compassion and sympathy for the people whose lives and livelihoods are being threatened by landmines and explosive remnants of war,” Thuch said.

The government has agreed for CMAA to hold a “global conference on victim aid” in Cambodia in 2023, which will be attended by 36 countries.