AMR: When infections fight back, kill 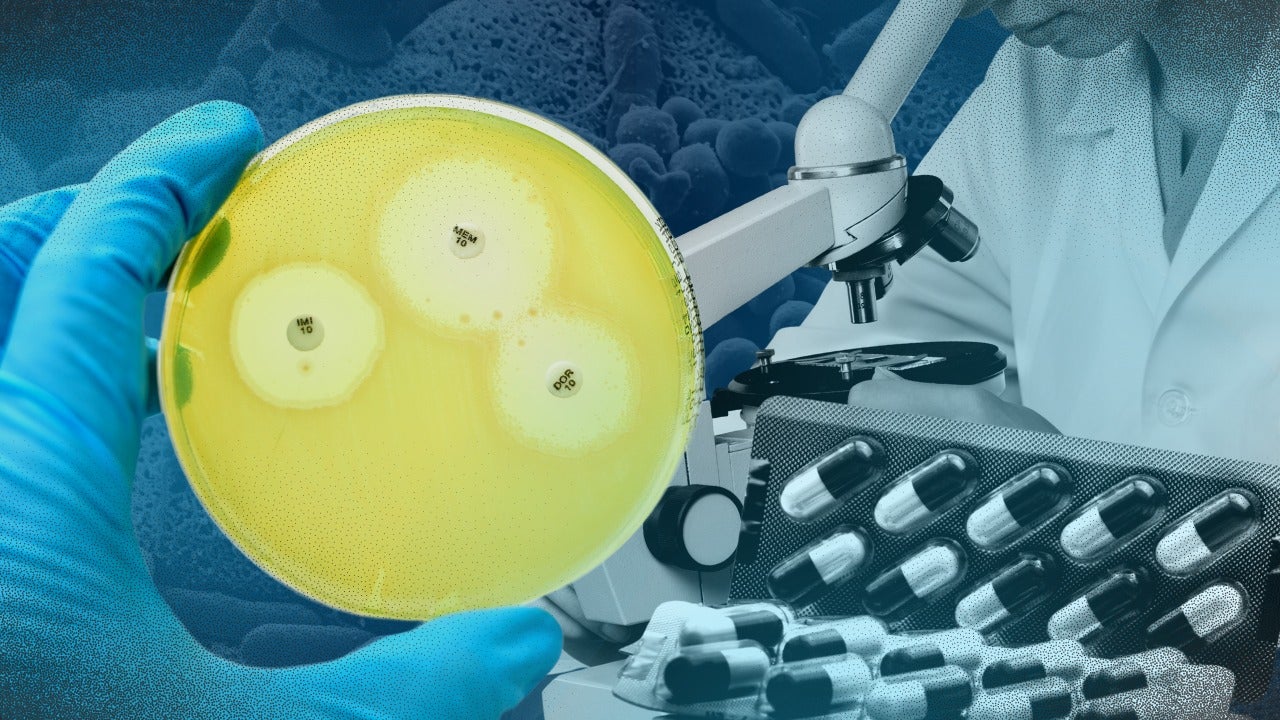 MANILA, Philippines—Amid the still ongoing COVID-19 pandemic, the Philippines and other countries continue to fight Antimicrobial Resistance (AMR)—a silent pandemic that claims millions of lives and raises the costs of fighting infectious diseases.

Antimicrobials, or antimicrobial agents, are medicines used to kill or inhibit the growth of germs and treat infectious diseases.

However, infectious disease agents—like bacteria, viruses, fungi, and parasites—change over time and may no longer respond to medicines. This occurrence, according to World Health Organization (WHO), is known as AMR. 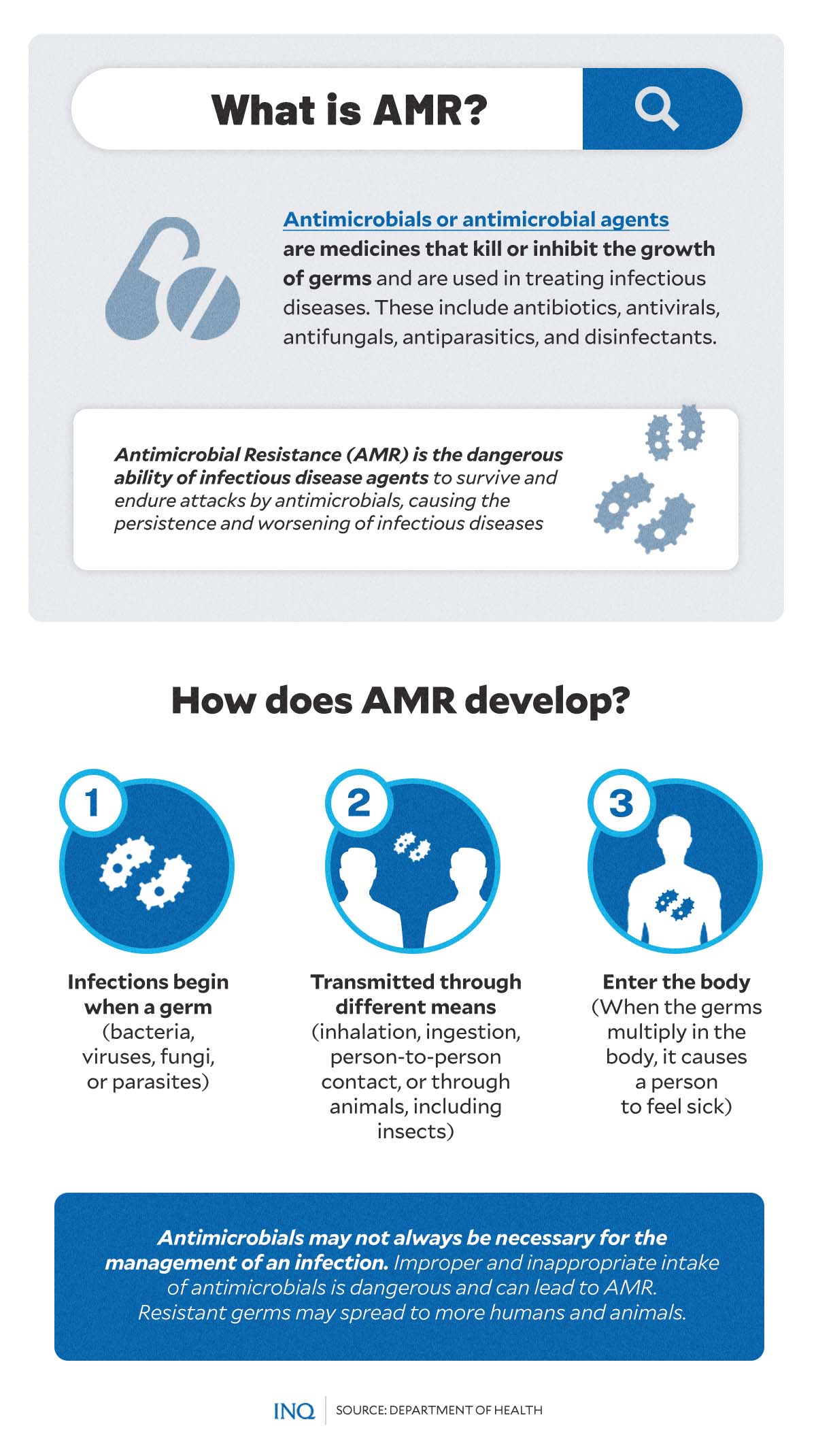 AMR also makes infections harder to treat and increases the risks of disease spread, severe illness, and even death. In 2015, nearly 5 million deaths worldwide were associated with bacterial AMR, of which 1.3 million were directly attributed to bacterial AMR.

This pushed WHO to include it among the top five global health problems in 2019 and recognize it as an “invisible pandemic.”

Studies showed that the threat of AMR might continue to intensify until 2050 and cause 10 million deaths annually “and global economic losses approximating US$100 trillion or a reduction in the world’s Gross Domestic Product (GDP) by 2-3.5 percent per year.”

AMR has been a longstanding problem in the Philippine health sector, according to Health Undersecretary Maria Rosario Vergeire, officer-in-charge of the Department of Health (DOH).

But how does AMR develop?

According to DOH, infections begin when infectious disease agents—bacteria, viruses, fungi, or parasites—are transmitted through different means, including inhalation, ingestion, person-to-person contact, or through animals and enter the body.

When the germs multiply in the body, it causes a person to feel sick.

However, DOH noted that improper and inappropriate intake of antimicrobials is dangerous and can lead to AMR. This further causes resistant germs to be transmitted to other humans and animals.

According to the report “The Philippine Action Plan to Combat Antimicrobial Resistance: A One Health Approach” by the DOH, there are various factors that contribute to AMR in humans—and everyone plays a role in it.

Irrational drug use among patients:

‘Filipino traits’ and AMR in PH

In the Philippines, one of the most common and critical causes of AMR is the misuse and overuse of antimicrobials.

According to Vergeire, many Filipinos still practice self-diagnosis and self-prescription or self-medication—which contributes to cases of AMR in the country. 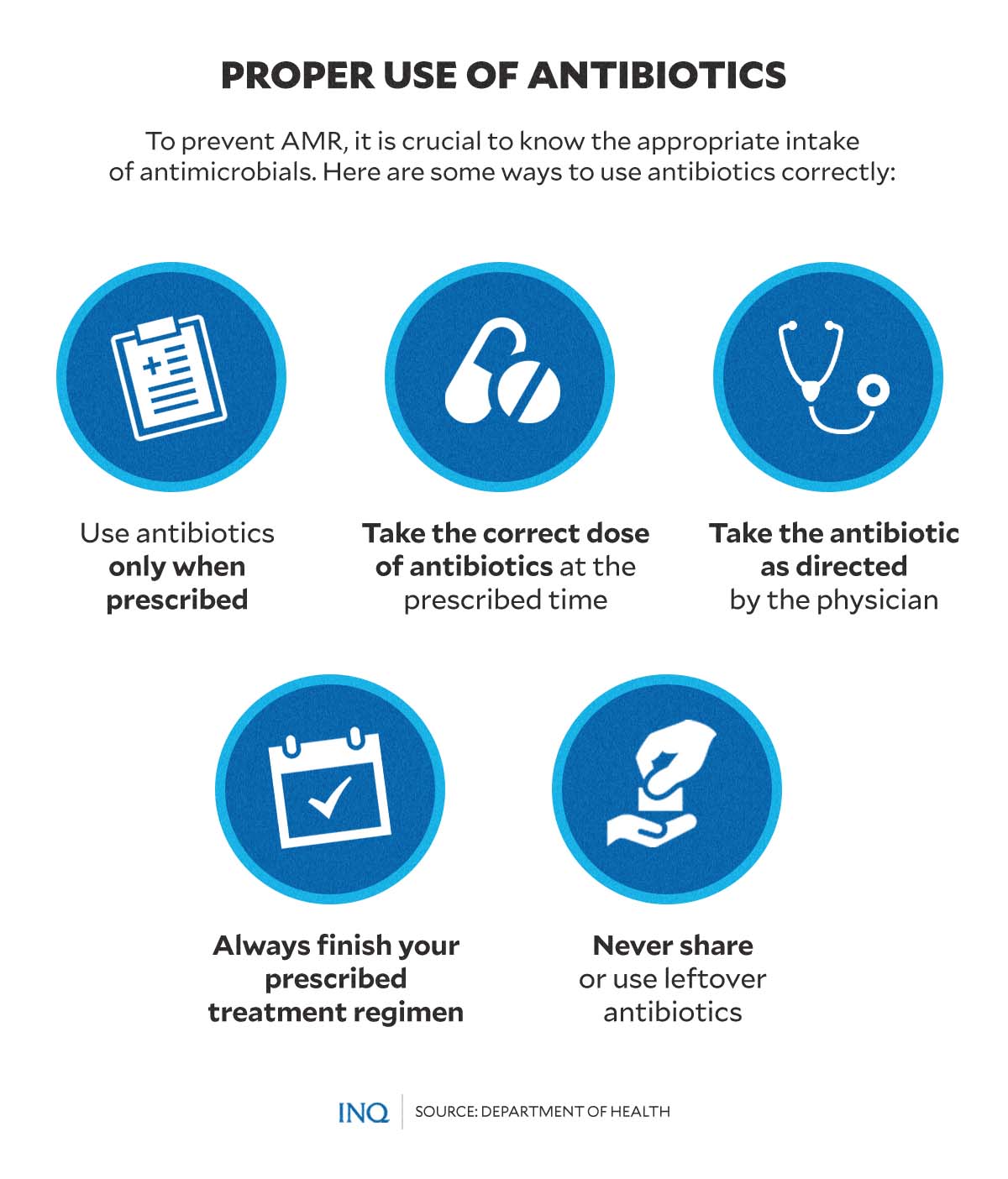 “Here in the Philippines, many people tend to self-prescribe, instead of consulting a doctor, and go to pharmacies to buy and intake medicines without the guidance of our [health professionals],” Vergeire explained, speaking in Filipino.

Vergeire also noted that generosity and the willingness to help others—common traits among Filipinos—are also factors that can lead to AMR.

“Sometimes in our communities, a patient tends to share [his or her] prescription or medicine given by a doctor to a neighbor or someone who experiences similar symptoms. This is, again, another [example] of the misuse of antimicrobials,” she said.

“Right now, the problem with antimicrobial resistance is increasing in the country. We might reach a critical point wherein the usual medicines we use to fight off infections might no longer work for most Filipinos because we are already resistant as a result of misusing and overusing antimicrobials,” Vergeire stressed.

One way to address and prevent AMR is by avoiding the misuse and overuse of antimicrobials.

To use antibiotics correctly, the DOH suggests the public do the following:

“Abuse and misuse of these can result in Antimicrobial Resistance (AMR) where conventional anti-infection drugs are no longer effective. Eventually, this will cause more severe illness and disease spread,” the DOH had said. 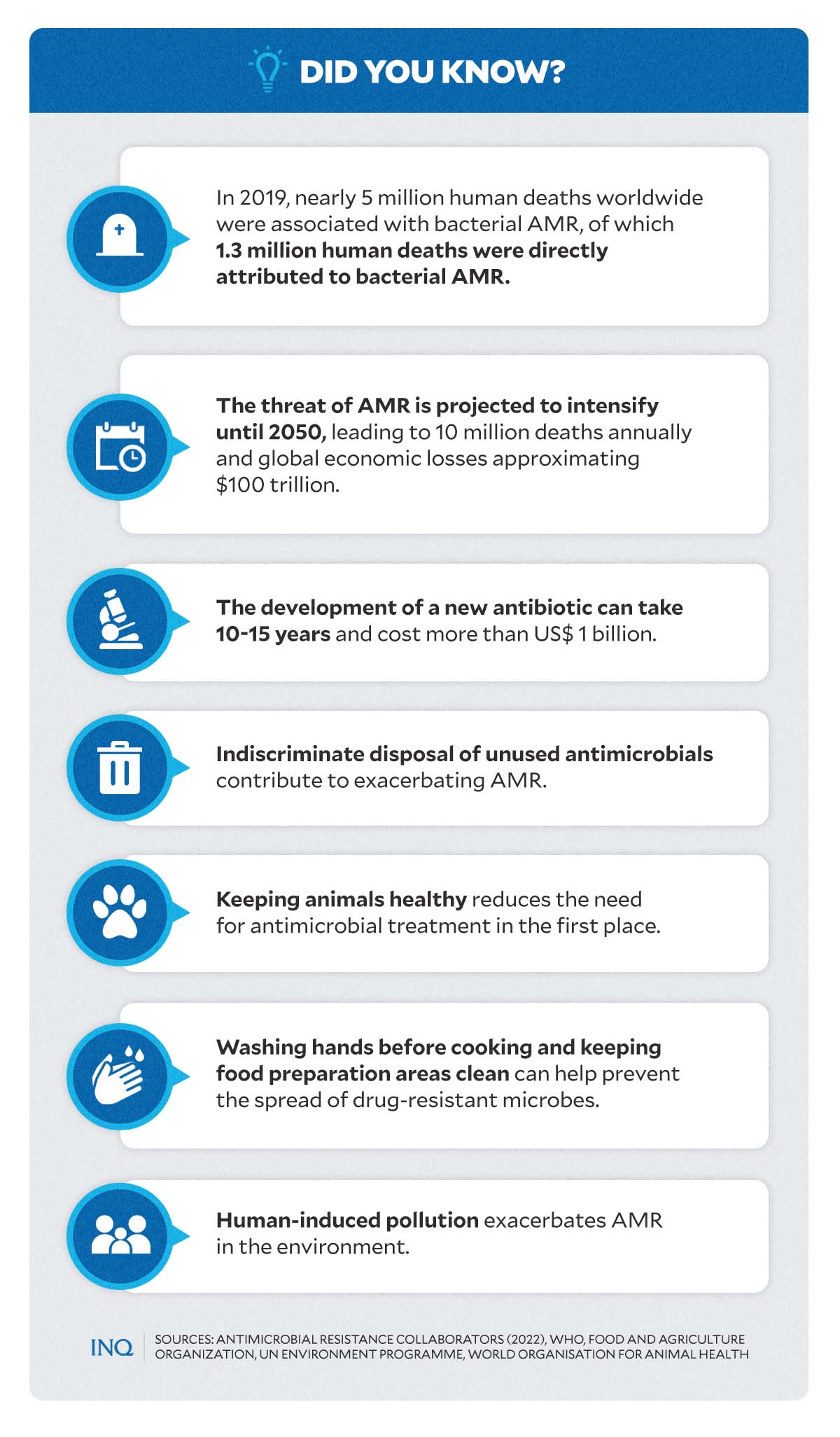 According to WHO, the development of a new antibiotic can take 10 to 15 years and may cost over US$ 1 billion.

“AMR can be prevented by always consulting your doctor before using antimicrobials, maintaining physical hygiene, and vaccination,” it added.