Is there enough food for 8 billion people? Experts say it’s not simple 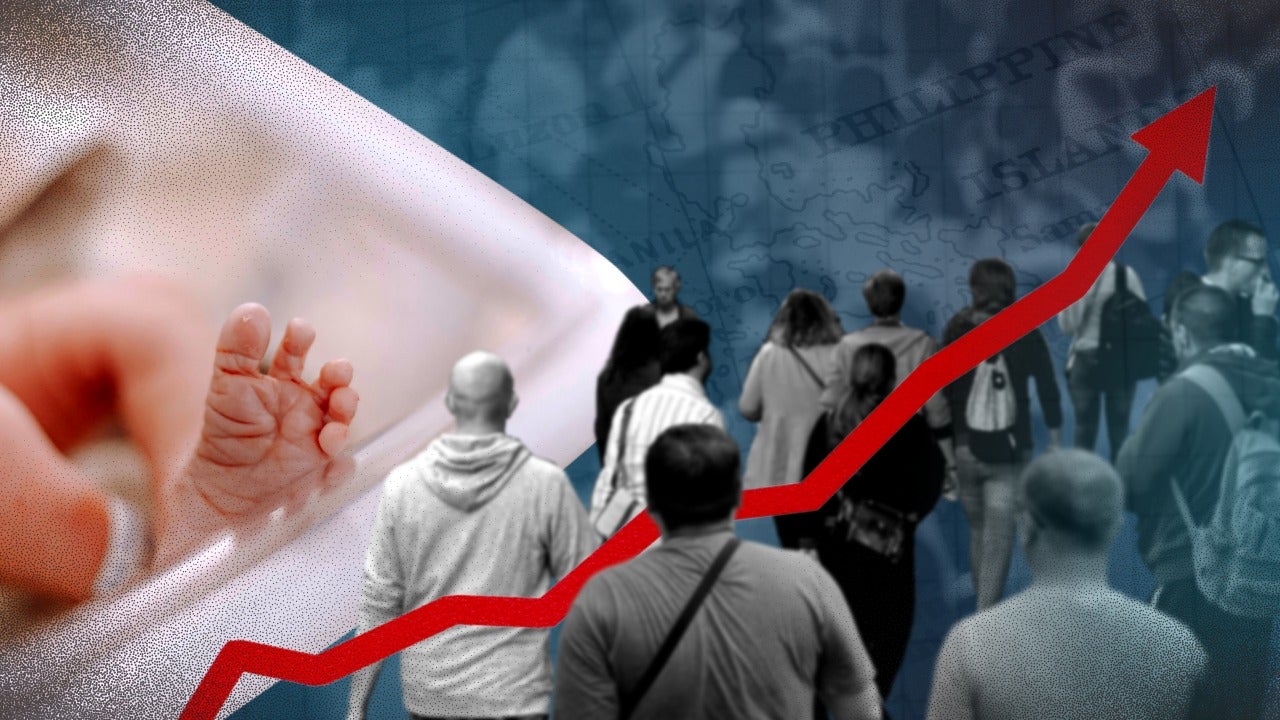 MANILA, Philippines—As the world population reached eight billion this month, age-old questions are being raised again—“Is there enough food to feed everyone?”, “Will more people lead to famine?”

Last Nov. 15, several births had been considered as yielding the eighth billionth person in the world, but in the Philippines, it was a baby girl—Vinice—who was born at the Dr. Jose Fabella Memorial Medical Center in Manila.

“The milestone is an occasion to celebrate diversity and advancements while considering humanity’s shared responsibility for the planet,” said United Nations (UN) Secretary-General Antonio Guterres in a statement.

Reaching 8 billion people, according to the UN, is a result of longer lifespans, reductions in poverty, and declining maternal and childhood mortality. 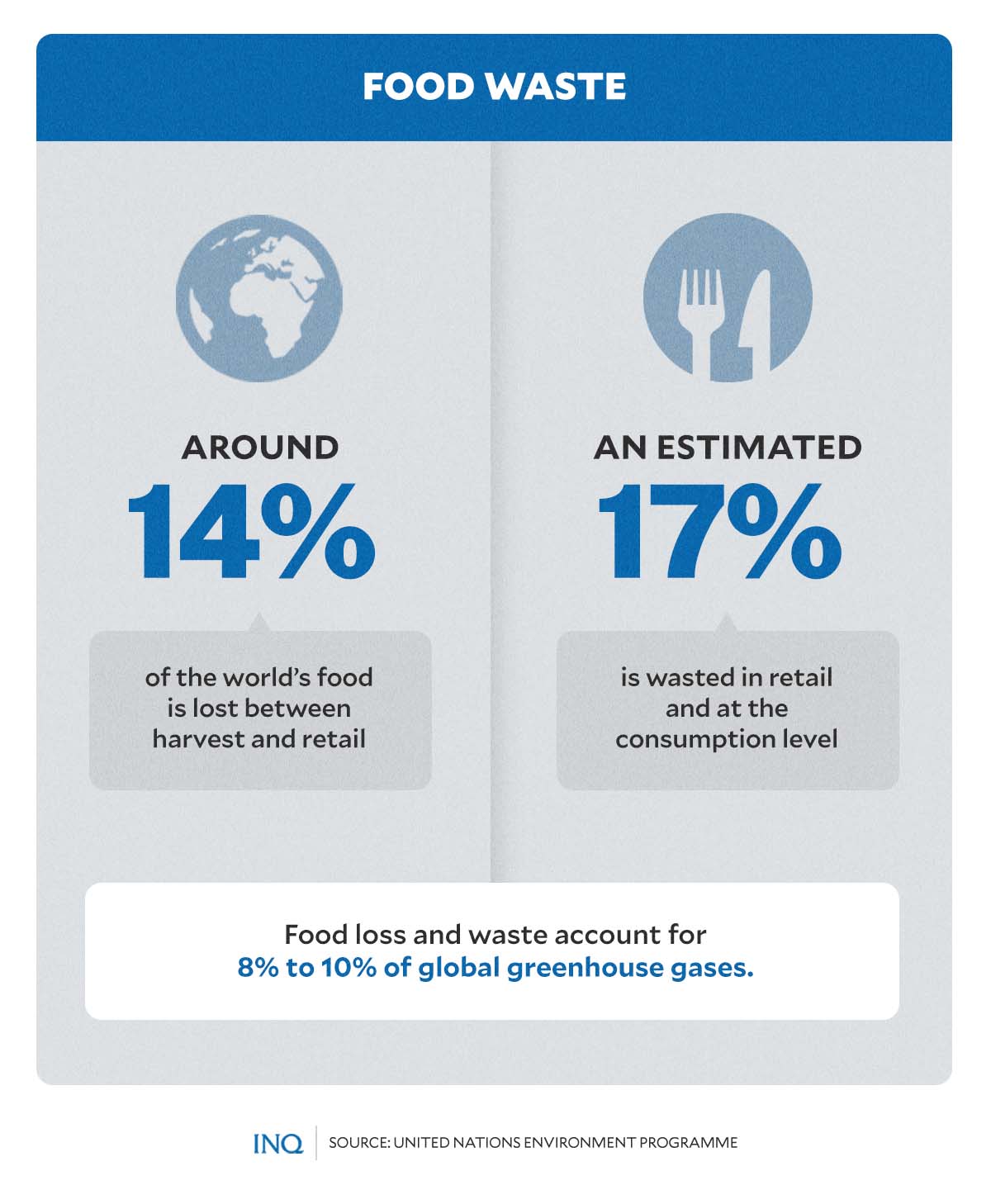 Asking if there’s enough food to feed everyone or how is reasonable, according to the UN Environment Programme (UNEP).

The answers, however, go beyond counting the number of people and empty plates.

According to the UN, whenever people hear of hunger, many are quick to point fingers at the growing human population.

In a now-deleted blog, British environmentalist Sir Jonathan Porritt claimed that famines—such as that in Somalia last 2011, which killed roughly 250,000 people—are ultimately caused by overpopulation.

“Sorry to be neo-Malthusian about it, but continuing population growth in this region makes periodic famine unavoidable,” he had written.

“Many of the children saved by the money raised over the next few weeks will inevitably be back again in similar feeding centres with their own children in a few years time,” Porritt wrote. 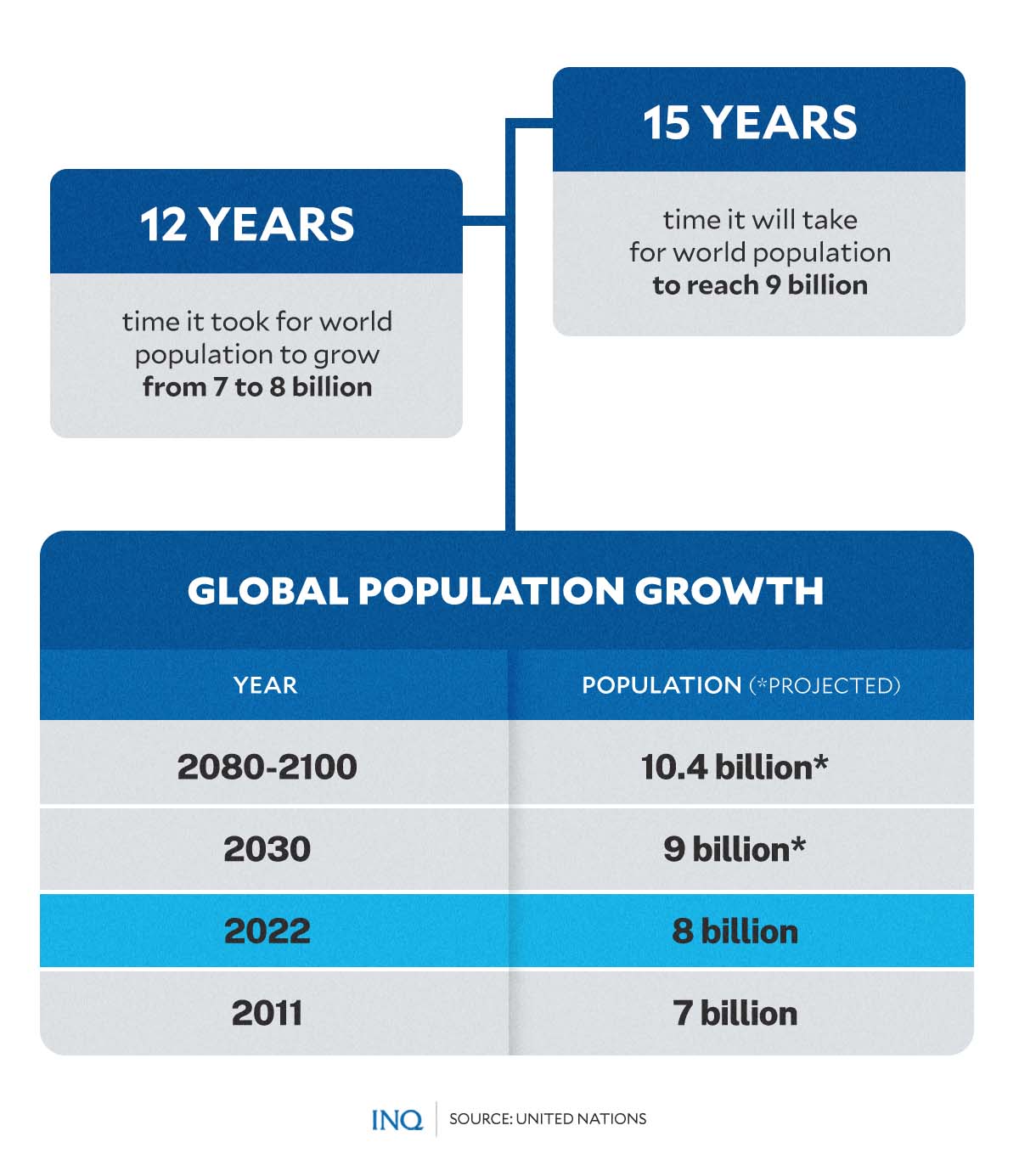 The University of Oxford’s Our World in Data said it is not uncommon to see arguments similar to the one raised by Porritt.

“There is something compelling about this logic: a finite land area, with a limited ‘carrying capacity’, cannot continue to feed a growing population indefinitely,” said Joe Hasell, a researcher at Our World in Data and a PhD candidate at the University of Oxford.

This kind of perspective, Hasell noted, is commonly associated with English political economist Thomas Robert Malthus, who was best known for his assertion that “population growth will always tend to outrun the food supply,” leading to starvation.

However, looking at the history of famine mortality, Hasell argued that:

In response to the question, “Does population growth increase hunger?”, Hasell suggested looking at the experiences of individual countries and instead answer the question “Do these countries find it harder to adequately feed their population?”

To answer it, Hasell compared countries’ Global Hunger Index (GHI)—a composite measure, out of 100, that combines four indicators like undernourishment, child wasting, child stunting, and child mortality—between 1992 and 2017 with their population growth rates.

The Oxford researcher found that among countries with available GHI data between 1992 and 2017, those with higher levels of hunger also tended to have had higher population growth during the same period. 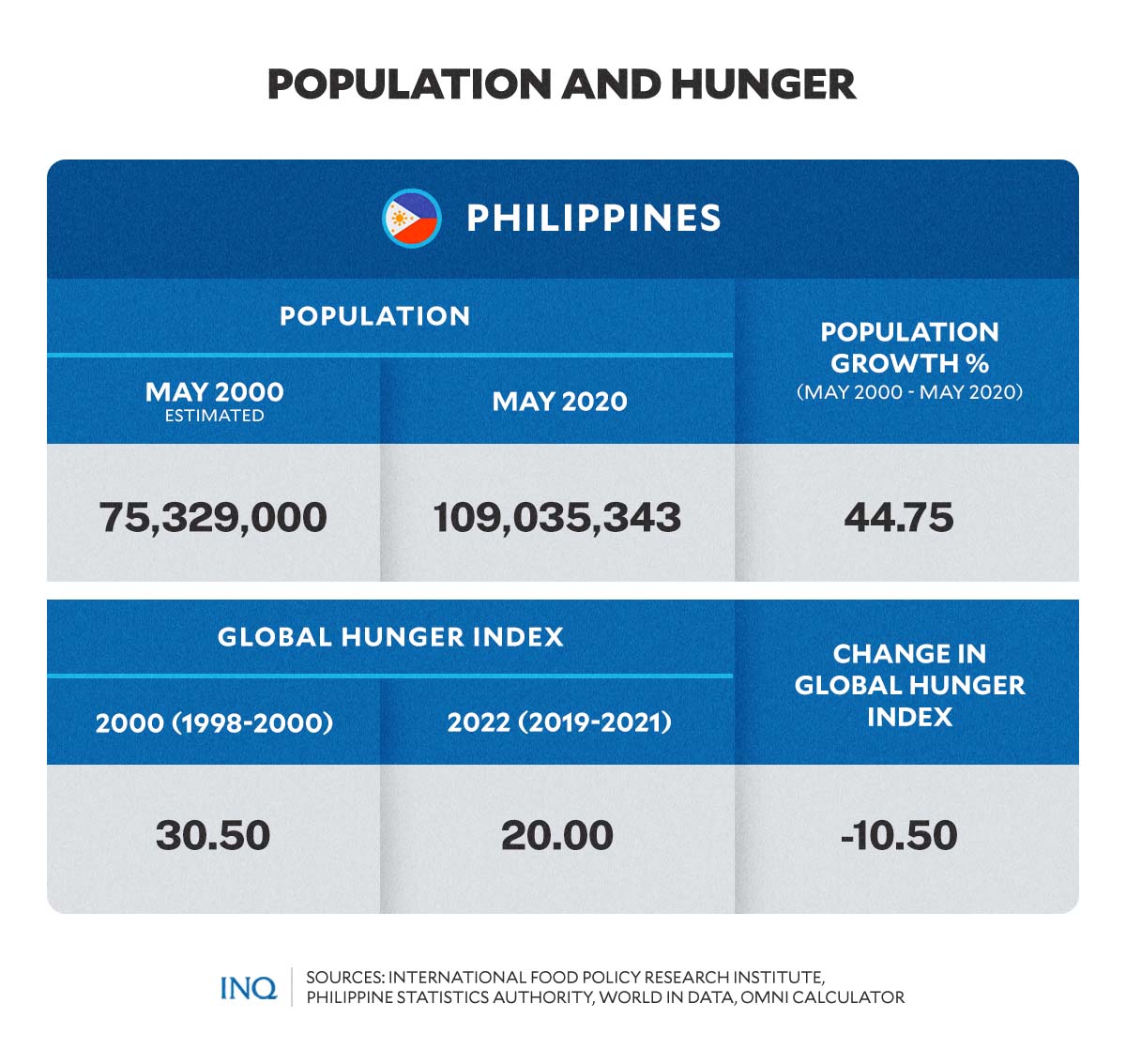 “Over the same period population went up in almost every case. Moreover, those countries that experienced higher levels of population growth, in fact, saw a bigger drop in their GHI score over this period,” said Hasell.

“The countries that saw high population growth over this period started with higher levels of hunger in 1992,” he said.

Applying Hasell’s method, the currently available data were consistent with earlier findings. From May 2000 to May 2020, the country’s estimated population grew by 44.75 percent. On the other hand, its GHI score dropped by 10.50.

It should be noted, however, that the GHI data excluded some very food-insecure countries like the Democratic Republic of Congo, South Sudan, and Somalia—which have also seen high levels of population growth in the past 25 years.

“This should be borne in mind when interpreting the following results,” Hasell said.

“However, this represents only one aspect of the complex explanation of why so many people suffer and die from undernourishment today, despite their being adequate food available for consumption globally,” Hasell argued.

According to him, the Malthusian explanations of the relationship between population growth and hunger fell short for the following reasons:

“If we want to put an end to hunger, we need to understand the diverse causes that bring it about. Oversimplifications that mistakenly see hunger and famine as an inevitable consequence of population growth do not contribute to this end,” he concluded.

Enough food for everyone

Based on the 2022 iteration of The State of Food Security and Nutrition in the World report, the Food and Agriculture Organization of the United Nations (FAO) found that there were 828 million “empty plates” worldwide in 2021. This represented around 828 million people who were stricken by hunger last year.

“Projections are that nearly 670 million people will still be facing hunger in 2030–8 percent of the world population, which is the same as in 2015 when the 2030 Agenda was launched,” it added.

Continued population growth will significantly increase food demand in 2050, however, according to Cheryl Sawyer, senior population affairs officer of the UN Department of Economic and Social Affairs.

“Population growth is certainly an important driver of increased food demand, but its impact is amplified by the changes in the types and quantities of food we consume,” Sawyer said last year.

UNEP, however, clarified that there is enough food for everyone.

Despite the stagnated progress in reducing hunger in the past few years, evidence showed that the problem the world faces today is not lack of food. Rather, it is a problem of efficacy.

“Conventional wisdom has centered on quantity as the solution to hunger. It assumed that more food would mean less hunger, and more wealth would mean better health because higher incomes enable people to buy more food,” UNEP explained.

“But long-term trends reveal an equation that is not so straightforward,” it added.

The UN agency noted that since 2015, hunger in countries across the globe began to rise again—along with malnutrition and obesity as a growing concern and “double burden” in many countries.

“The current food systems are failing people and the planet in myriad ways. After more than a decade of steady decline, the number of undernourished people in the world increased to almost 690 million, or 8.9 percent of the global population, in 2019,” said Sawyer.

“Moreover, seven percent of children under five suffer from acute malnutrition, while nearly 40 percent of adults are overweight. More than 3 billion people cannot afford a healthy diet. Unhealthy diets are now responsible for more adult deaths and disability worldwide than tobacco use,” she added.