BuCor to tear down concrete barriers along NBP roads 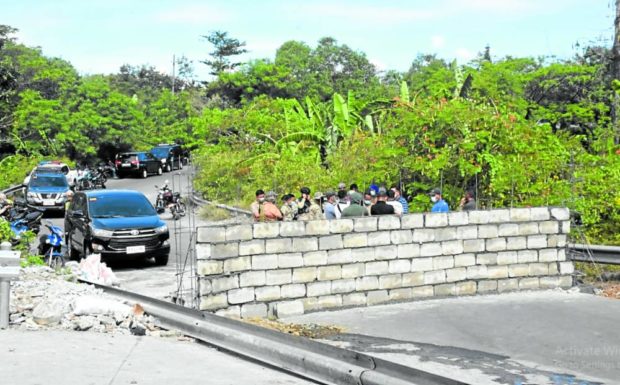 FENCED | Residents and local officials check out the concrete wall erected across Insular Road by the Bureau of Corrections supposedly for security reasons. (File photo from Philippine Daily Inquirer)

MANILA, Philippines — Gregorio Catapang, the officer in charge of the Bureau of Corrections (BuCor), will tear down the control gates erected during the time of his suspended predecessor Gerald Bantag and allow people, especially students, to go to their destinations within the 104-hectare New Bilibid Prison (NBP) reservation unhampered.

For Catapang, the control gates — which were previously reported to be concrete walls in the middle of the NBP roads — were a violation of the public’s constitutional right to “freedom of movement.”

“I will restore access to people, because people should really be able to move without sacrificing the security of the [NBP] camp,” he said in a television interview on Thursday.

In March last year, Bantag had a control gate erected on Insular Prison Road, which impeded the access of residents of Southville 3, a housing project of the National Housing Authority, to and from the city’s Barangay Poblacion.

Eight months later, in November, BuCor again put up a gate on University Road which also restricted the movement of residents of Katarungan Village 1 and 2, a housing project of the Department of Justice.

Heeding residents’ complaints, the city government protested the control gates, arguing that they were built without consultation with the local government or city residents.

But Bantag insisted they were built for “security reasons,” noting that it should have been put up 15 years ago.

Catapang, a career security official who retired in 2015 as chief of the Armed Forces of the Philippines, said possible security threats could be “minimized if there are systems in place,” even if civilians were allowed access again to the NBP roads.

“I will request every person who will enter [NBP]. Please identify yourself because you are passing through our property,” he said.

“In the same manner, I want to recognize the right to freedom of movement, especially the children. When it is raining, they get drenched, so what do we do? I may get blamed if they get sick.” Catapang added.

Muntinlupa Mayor Ruffy Biazon thanked Catapang for his “compassion to Muntinlupeños,” even addressing the officer in charge as “director general.”

He welcomed Catapang’s assurance to demolish the gates impeding the access of residents, which turned to a bitter spat between the city government and the BuCor administration.

“I asked him to give consideration to the plight of the residents, especially the students who are having a difficult time going to their classes,” Biazon said in a statement.

In a letter to Catapang on Nov. 11, Biazon requested students who are attending classes at the three schools inside the NBP reservation — Itaas Elementary School, Muntinlupa National High School-Main, and Pamantasan ng Lungsod ng Muntinlupa — to be granted access on the NBP Roads.

“Since the resumption of [in-person] classes in August, [the students] have found it gravely difficult to attend classes because of the restrictions imposed by BuCor,” the mayor wrote.

According to Biazon, the city government has undertaken steps to address the problems, including deploying government vehicles to ferry students — “but these are insufficient and incomplete without access to these roads.”