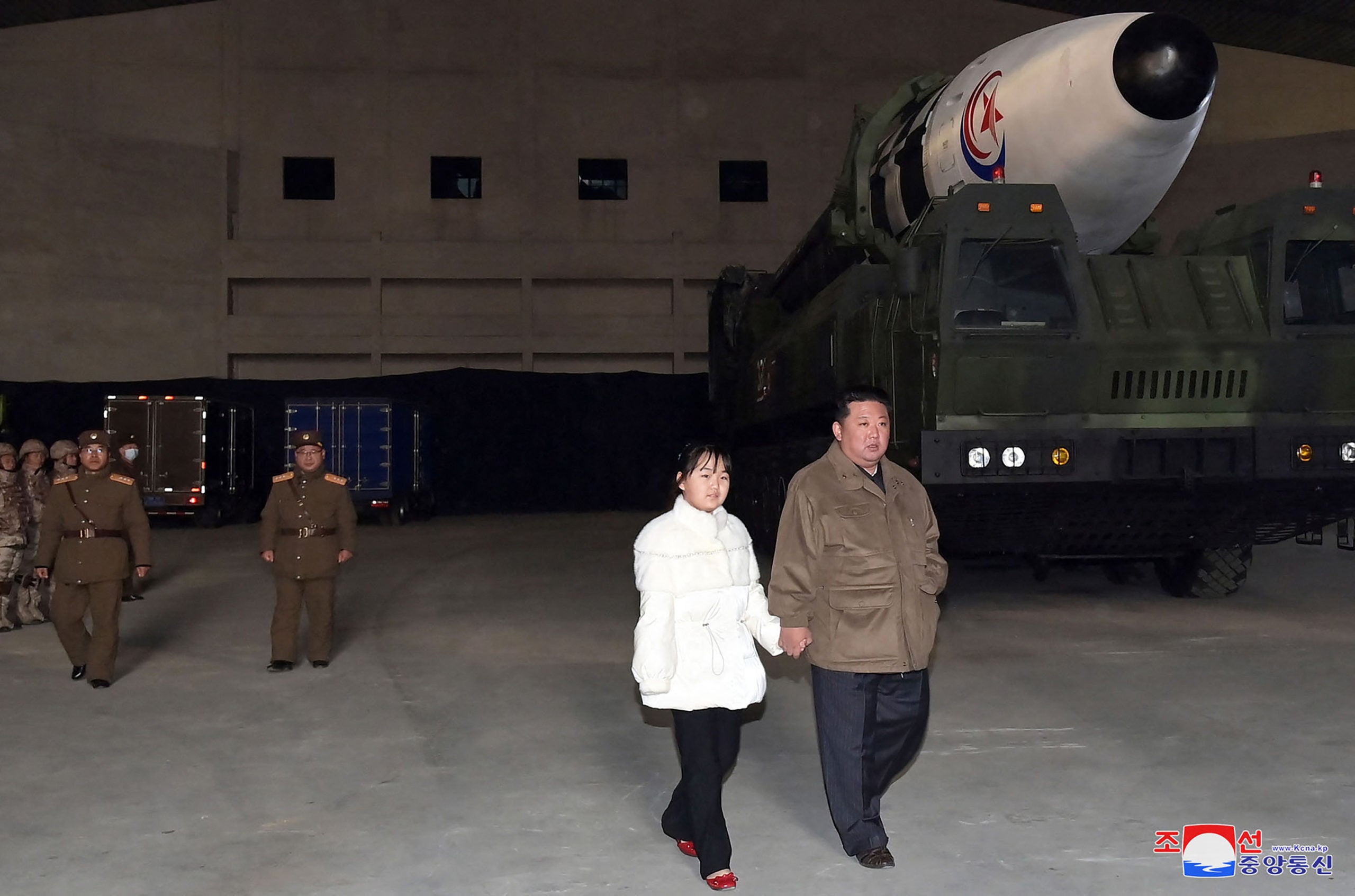 Declaring he would meet perceived US nuclear threats with nukes of his own, Kim supervised the launch on Friday of the black-and-white missile, which the official Korean Central News Agency (KCNA) said was the Hwasong-17 — dubbed the “monster missile” by analysts.

The launch was successful, KCNA said, adding that the “test-fire clearly proved the reliability of the new major strategic weapon system.”

KCNA said Kim attended the launch “together with his beloved daughter and wife”, and state media images showed a beaming Kim accompanied by a young girl in a puffer jacket and red shoes as he walked in front of the missile.

North Korean state media has never mentioned Kim’s children, and this was the first official confirmation that he had a daughter, experts said.

The latest launch shows that “the nuclear forces of the DPRK have secured another reliable and maximum capacity to contain any nuclear threat”, KCNA said, using the country’s official name, the Democratic People’s Republic of Korea.

Since Kim declared North Korea an “irreversible” nuclear state in September, the United States has ramped up regional security cooperation.

The South Korean military said it staged joint air drills with the United States on Saturday involving the US B-1B long-range heavy bomber.

The B-1B was deployed to the Korean peninsula earlier this month too during “Vigilant Storm”, the largest-ever US-South Korean air exercise.

The UN Security Council on Saturday said it would discuss North Korea in a Monday meeting.

Kim slammed what he called “hysteric aggression war drills” and said that if the United States continued to make threats, Pyongyang would “resolutely react to nukes with nuclear weapons and to total confrontation with all-out confrontation”, KCNA reported.

Nuclear-armed North Korea has conducted a record-breaking blitz of launches in recent weeks, which Pyongyang — and Moscow — have repeatedly blamed on Washington’s moves to boost the protection it offers to allies Seoul and Tokyo.

Fears have grown that the launches are building up to a nuclear test.

KCNA said the latest missile hit a maximum altitude of 6,040.9 kilometres (3,750 miles) and flew 999.2 kilometers, matching estimates by Seoul and Tokyo on Friday.

North Korea previously claimed to have launched a Hwasong-17 — its most powerful missile to date — on March 24, releasing a slick promotional video and photos of the event.

But Seoul later cast doubt on that claim, with local reports suggesting it had exploded over the skies of Pyongyang on March 17, and that North Korea had faked a successful launch using a smaller, older missile.

This time, analysts said it seemed North Korea had succeeded.

“This launch is significant because it is thought to be the first successful full flight test of the Hwasong-17 ICBM,” Joseph Dempsey, a researcher at the International Institute for Strategic Studies (IISS) told AFP.

As with all North Korean ICBM tests, the missile was fired on a “lofted” trajectory — up not out, to avoid flying over Japan — which means key questions remain — “particularly in terms of surviving reentry into the atmosphere and testing the accuracy over greater ranges,” he said.

“Its sheer size makes it less practical as a road-mobile system, and production would be likely a significantly greater strain on limited resources,” he said.

The most significant takeaway from Friday’s ICBM launch is “the permanence of the Kim regime’s weapons program, because it is so integral to Kim’s own survival and the continuity of his family’s reign,” Soo Kim, a former CIA analyst now with the RAND Corporation, told AFP.

With the state media coverage, “we have seen with our own eyes the fourth generation of the Kim family,” she said.

“And his daughter — along with potential other siblings — will surely be groomed by her father.”