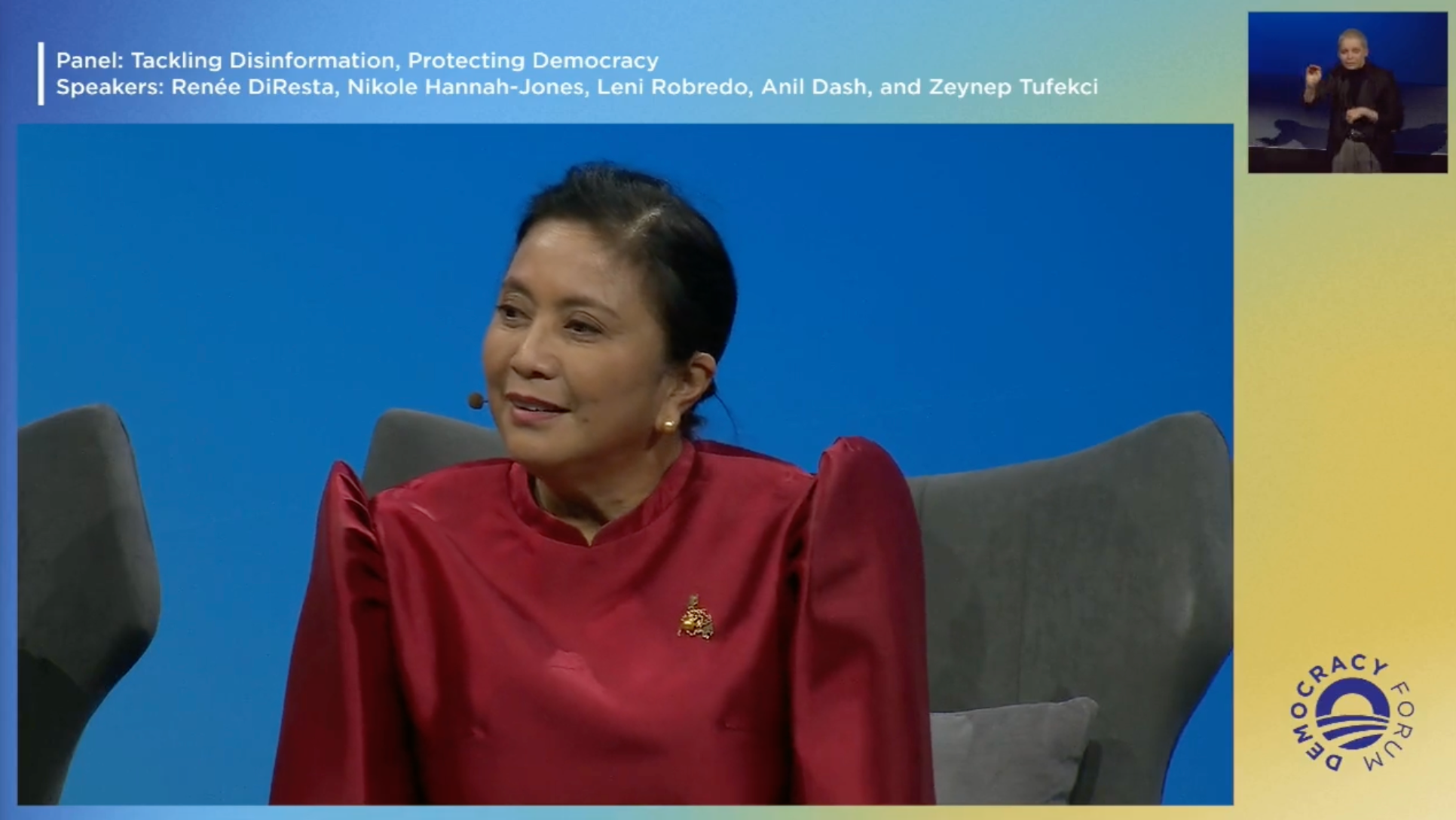 The fight against disinformation is a responsibility that should be carried by everyone so more sectors could contribute in combating fake news, according to former Vice President Leni Robredo.

Speaking at the Obama Foundation’s Democracy Forum on Friday (Manila time), Robredo, one of the invited speakers, shared with her fellow panelists how a group of academics, journalists, church leaders and civil society groups have come together to initiate a move to check facts seen and shared on social media.

Robredo was referring to the #FactsFirstPH, which is composed of more than 120 groups including several media organizations, civil society organizations and public policy centers from different universities, including business groups.

The movement was formed last January at the height of the campaign season.

“We try to learn from the best practices around the world. [This] initiative started in the Philippines, which I think bears pushing through even after the campaign,” Robredo said.

For Robredo, this should be the “path forward” in the combat against disinformation by pulling everyone together in forming a “broader and more inclusive framework … so that all stakeholders will be able to contribute to the solutions.”

Another point she raised was the European Parliament’s passage of the Digital Services Act and the Digital Market Act, which would hold social media firms accountable in the event of a massive spread of disinformation by mandating them to take immediate actions in any case of “illegal contents” being posted.

Robredo pointed out that there are lobbyists of similar legislation all over the world or at least those seeking to improve existing laws and policies on responsibilities of social media companies.

During the forum, Robredo also said she realized the “mistakes” she and her team committed during the campaign season, especially in their response against the disinformation aimed at her.

She acknowledged her “initial stance,” which was to ignore all that malicious information that targeted her since she won as vice president in the 2016 elections.

“But we realized, too late, that it was the wrong response,” Robredo said. “It’s like we are trying to correct [this misinformation] but the fact-checking was just being heard in our own echo chambers because there is a separate reality already.”

“It’s like we could not penetrate into the cells that have been created because of disinformation,” she also said.

Robredo was named the “biggest fake news victim” by the fact-checking initiative Tsek.ph, with President Marcos, then her rival candidate, benefiting the most especially during the campaign season.

To recall, Robredo’s then spokesperson Barry Gutierrez had filed a cyberlibel complaint against Journal News Online for falsely claiming that Communist Party of the Philippines founder Jose Maria Sison was her campaign adviser in the last May 9 polls.