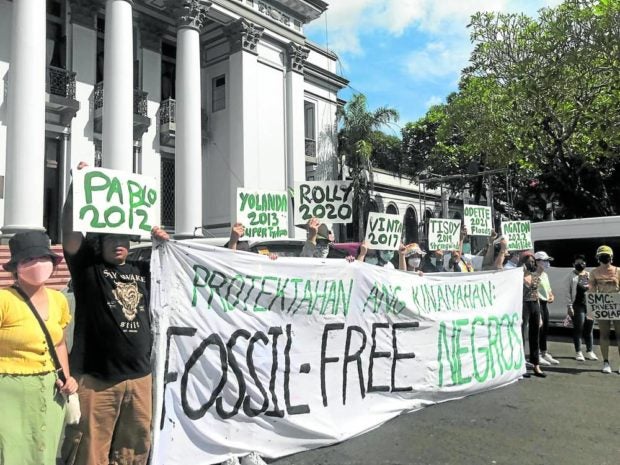 ADVOCACY Environment advocates reiterate their support for clean sources of energy during a protest staged outside the Negros Occidental provincial capitol in Bacolod City during the celebration of Earth Day in April this year. —PHOTO COURTESY OF YOUTH FOR CLIMATE HOPE

“This is a victory for [Negrenses] who have made their voice clear that they preferred renewable energy to LNG in sourcing their power for the island,” said Avril de Torres, deputy executive director of the Center for Energy, Ecology and Development (CEED).

“Although LNG is considered a ‘transition fuel’ by some, it is clearly unnecessary for Negros which boasts of extensive renewable energy facilities,” she said.

De Torres was informed about the SMC’s decision through a letter sent by the Environmental Management Bureau (EMB) on Nov. 14.

“The proponent (SMC) decided to no longer pursue its ECC application for the proposed 300-MW LNG Combined Cycle Power Plant Project. As such, this office has withdrawn from the list of ECC applications the proposed project of REDI (Reliance Energy Development Inc.),” the letter read.

The Inquirer had reached out to an SMC representative in the province on Wednesday but the company had yet to issue a statement as of Thursday afternoon.

According to the Natural Resources Defense Council, a US-based nonprofit environmental advocacy group, natural gas, in any form, contributes to climate change because burning gas for energy releases carbon into the atmosphere, which fuels global warming.

LNG is an “especially problematic form of natural gas” for the climate because it uses a lot of energy to chill the gas to liquid form, hold it, transport it and warm back the gas, it said.

“When you add all of that up, LNG is responsible for about twice as much greenhouse gas as ordinary natural gas,” according to the NRDC.

The plant, which would be developed by REDI, an SMC subsidiary, faced opposition from Negrenses led by Bishop Gerardo Alminaza of the Diocese of San Carlos.

“I am grateful for the help of the Almighty in ensuring that the voice of the people of Negros are heard and that the natural beauty of our island can be preserved through the minimal use of fossil fuels,” the prelate said.

Alminaza is hoping that other provinces will follow Negros Occidental’s lead in rejecting fossil fuels and accelerating the adoption of the more affordable and sustainable renewable energy sources.

“We also hope that the [Negros Occidental] Sangguniang Panlalawigan will finally listen and pull out the resolution of nonobjection it prematurely issued to the project,” Alminaza said.

According to the bishop, the proposed LNG power plant was supposed to be built at the San Carlos Ecozone facing Tañon Strait, a body of water separating Negros and Cebu islands and where marine life thrives. The strait is home to dolphins and whales and is a rich fishing ground for small and commercial fisherfolk.

Alminaza said they feared that had the project pushed through, it would have destroyed marine habitats, mangroves and wetlands along the shoreline; generated pollution; and exposed local communities to various hazards.

“The LNG power plant will drain life from the Tañon Strait, and take away the livelihood of fisherfolk,” he said.

He stressed the need to protect Tañon Strait in order to promote healthy and sustainable fishing communities, and maintain San Carlos City as fossil fuel-free.

The bishop reiterated his call for SMC and other companies as well as for the government to hasten the shift to renewable energy, and for financial institutions to stop supporting projects involving fossil fuels.

“We, the youth, have been left out of the equation in determining the energy policy of this country. The continued use of fossil fuels will affect us economically in the form of high electricity prices, and environmentally in the form of severe climate change,” she said.