Geopolitics to stay in focus at Apec summit in Thailand 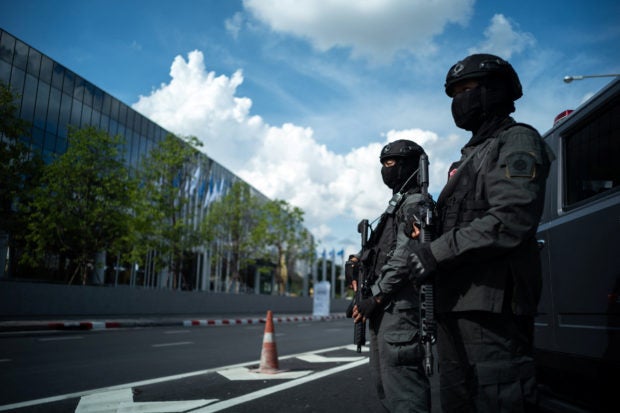 Riot police officers stand guard in front of the Queen Sirikit National Convention Center where the APEC summit will be held, in Bangkok, Thailand, November 15, 2022. REUTERS

BANGKOK — World leaders arrived in Thailand on Thursday ahead of the Asia-Pacific Economic Cooperation (Apec) forum, the last of several of summits in the region that have been dominated by geopolitical tensions over the war in Ukraine.

Thai Prime Minister Prayuth Chan-ocha, who is hosting the 21-member bloc starting Friday, said at a pre-summit business event the agenda was to focus on “new trade and investment narratives…the need to reconnect supply chains and travel, and the global sustainability agenda”.

Foreign ministers of the group are set to meet on Thursday.

On the sidelines, Chinese President Xi Jinping is expected to have bilateral talks with Japanese Prime Minister Fumio Kishida later in the day. U.S. Vice President Kamala Harris and Australian Prime Minister Anthony Albanese are among those also attending the main meeting.

The Apec meeting comes on the heels of the Group of 20 (G20) summit in Bali where countries unanimously adopted a declaration saying most members condemned the war in Ukraine, but that also acknowledged some countries saw the conflict differently.

Host Indonesia said the Ukraine war had been the most contentious issue at the summit in Bali.

The leaders of the world’s biggest economies also agreed to pace interest rate rises carefully to avoid spillovers and warned of “increased volatility” in currency moves.

Tensions also simmered elsewhere at the G20 summit in Bali when Xi criticized Canadian Prime Minister Justin Trudeau in person over alleged leaks of their closed-door meeting, a rare public display of annoyance by the Chinese leader.

Russia is a member of both G20 and Apec but President Vladimir Putin has stayed away. He was represented by Foreign Minister Sergei Lavrov at the G20 and First Deputy Prime Minister Andrey Belousov will stand in for him at Apec.

Earlier this week, at the back-to-back Southeast Asian and G20 summits in Cambodia and Indonesia, discussions centered on the Ukraine war, tensions over Taiwan, the crisis in Myanmar, and risks facing the global economy.