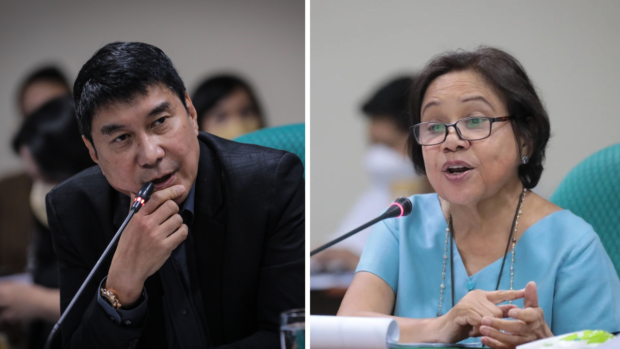 MANILA, Philippines — Senators Raffy Tulfo and Cynthia Villar have engaged in a heated exchange about the conversion of farmlands into residential or commercial areas during plenary deliberations on the 2023 budget of the Department of Agriculture (DA).

Tulfo first inquired about DA’s efforts to address the decreasing number of farmlands in the country. Villar, the sponsor of the proposed P160.85 billion budget of the DA for next year, responded with a seeming explanation of how her family’s business acquired lands to develop into residential or commercial ventures.

(Farmlands are getting smaller and smaller as big developers buy them and convert them into commercial and residential lands. What is the DA doing about this?)

“They allow conversions in cities and capital towns because if they buy your land, they buy it expensive. And you can re-invest the money, and you will make more money than planting on those lands,” Villar then pointed out.

She even recalled her family’s previous decision to develop their eight-hectare chicken farm in Muntinlupa City after learning that they “will make more money [in this] than in farming.”

“It’s an investment decision for these people. If somebody will buy your land at a bigger amount, you can sell it and buy another land that is cheaper somewhere else and build your farm there. You have to understand agriculture as a business also,” Villar added.

But Tulfo said Villar’s response was not answering his question. Instead, he repeated his assertion that many farmlands in the country have been commercialized.

Then Villar interjected: “Where will the people live if you don’t build subdivisions?”

Tulfo replied by pointing out that there are many other areas where these subdivisions can be constructed.

(Just don’t take over the farms because sometimes, the impoverished farmers are being taken advantage of.)

The neophyte senator also noted that due to the rice tariffication law (RTL), which liberalizes the importation of rice, farmers are often pushed to sell their lands due to tight financial situations.

Villar, who was also among the authors of the RTL, said that when she drafted the law in 2018, the price of rice was about P50 to P60 per kilo.

“That was the only time President [Rodrigo] Duterte became unpopular. Because rice is a political crop. When nagmamahal ang rice, nagiging unpopular ang President (When rice prices go up, the President becomes unpopular),” she said.

Villar also insisted that passing the RTL was crucial in bringing down the country’s credit rating.

“We have plenty of loans abroad and we have to pay higher interest for those loans so it will be a loss for the Philippine government,” she explained.

The senator also noted that money collected from rice tariffs was all given to small rice farmers.

Villar further asserted: “We need the residential and commercial areas to improve the quality of the lives of our people. It’s not the amount of farmlands. It’s the efficiency of using these farmlands.”

According to her, the amount of farmlands was not the issue but the country’s outdated agricultural model, particularly in the quality of seedlings planted and the traditional farming process.

But for Tulfo, this calls for the need to pass the long overdue National Land Use Act, which aims to create a national land management plan.

Villar, however, pointed out that land-use plans are already in place at the level of the local government.

Both senators again argued about which government level of land management is most optimal, prompting Senate President Miguel Zubiri to move for a minute-long suspension.

Tulfo ended his interpellation shortly after the resumption of the session, but he said he will soon deliver a privilege speech on the proposed National Land Use Act.