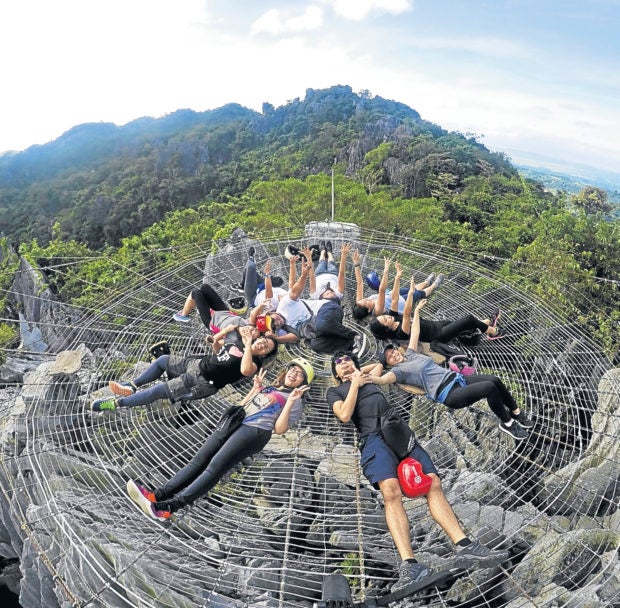 TOP SPOT | “Sapot,” a platform that looks like a spiderweb, is the most popular spot at Masungi Georeserve in Rizal province. (CONTRIBUTED PHOTO)

MANILA, Philippines — Basic education students in Rizal province and two cities in Metro Manila will be taught about protecting the country’s watershed areas like the Masungi Georeserve in the Sierra Madre range under a training program tailored for those communities.

Teachers in Baras and Tanay towns will receive training, teaching kits, and an opportunity to immerse in the Masungi geological park under the Localized Watershed Education program, a partnership between the Department of Education (DepEd) Schools Division Superintendent’s Office of Rizal and Masungi Georeserve Foundation Inc. (MGFI).

Susan Orbiana, school division superintendent at DepEd Rizal, said the collaboration with experts and advocates such as MGFI would empower teachers “to be able to really educate our children so that the responsibility for Mother Earth will be implanted in their hearts.”

One of the highlights of the training is the distribution of “Lakbay-Daloy” board game, a nature-based version of Snakes and Ladders illustrating positive and negative actions affecting the ecologically important waterways.

A watershed is an area of land that drains the rainfall downhill into rivers, streams, lakes, and oceans.

Teachers in Pasig and Marikina, two flood-prone cities that benefit from the Upper Marikina Watershed, of which the Masungi Georeserve is part, will also receive training under the program supported by the Canada Fund for Local Initiatives.

“The Upper Marikina Watershed regulates water flow and reduces the risk of floods and landslides in Rizal province and cities like Marikina and Pasig,” according to MGFI.

“We realize that we could not save the watershed alone; we need to empower more citizens, including the youth, to take cognizance and care of the watershed against destructive activities,” said Billie Dumaliang, an MGFI trustee.

On Nov. 4, MGFI presented the learning module to the city government of Pasig, along with the board game developed for students.

Masungi Georeserve, an award-winning conservation initiative, originally covered a 400-hectare land in Baras town but has since been expanded to include 3,000 ha of degraded forests for restoration.

The site is home to endangered flora and fauna as well as unique rock formations, including a 60-million-year-old limestone pinnacle karst, or the landscape shaped by the erosion of limestone.

The area has been subject to land-grabbing attempts due to valuable mineral and other resources since it was declared a protected area in 2011. Private settlements and establishments set up within the reserve had led to several conflicts between Masungi forest rangers and the alleged interlopers.

Under Republic Act No. 9512, or the Environmental Awareness and Education Act of 2008, environmental awareness must be integrated into the curriculum of learners at all levels.

It mandates that DepEd and other agencies, in consultation with environment and academic experts, “shall lead in the implementation of public education and awareness programs on environmental protection and conservation through collaborative interagency and multisectoral effort at all levels.”