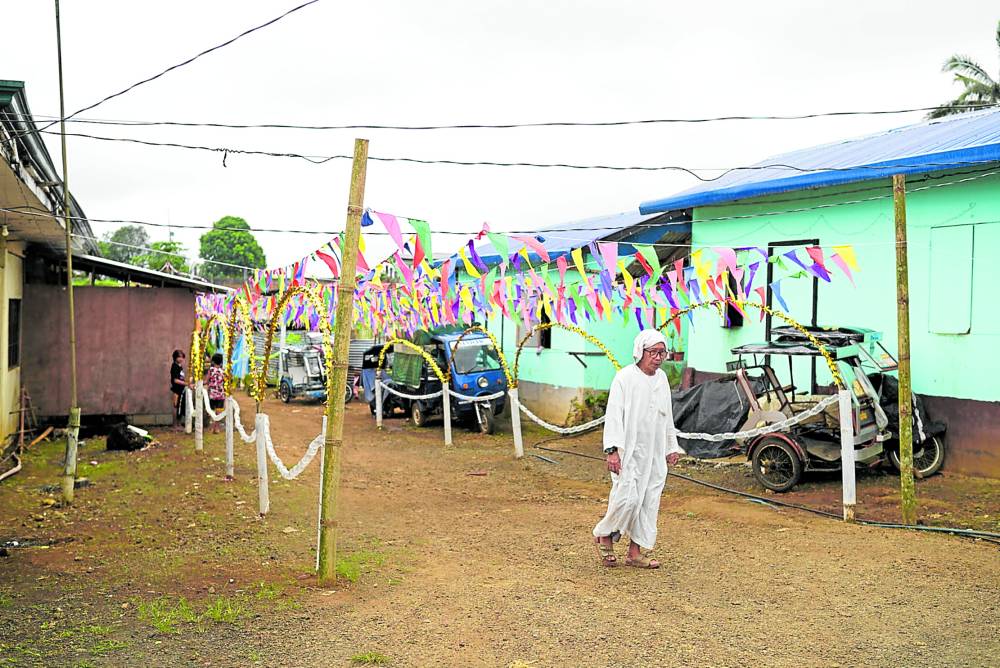 TEMPORARY HOMES Five years after the siege that destroyed their homes in Marawi City, displaced residents continue to live in temporary shelters in host communities like Barangay Bito Buadi Itowa in the city. Living conditions are challenging in these shelters, such as access to potable water and their livelihood.
—KARLOS MANLUPIG

DAVAO CITY—The bloody and destructive five-month war in Marawi City in 2017 that flattened its commercial district was seemingly glossed over by the United Nations Human Rights Council (UNHRC) in its fourth Universal Periodic Review on the Philippines, a Moro activist lamented.

Amirah Lidasan, who represented the Sandugo Movement of the Moro and Indigenous Peoples for Self Determination in the human rights lobby in Geneva, Switzerland, noted that the war, spawned by the siege by Islamic State-linked terrorists, involved large-scale aerial strikes and bombardments that threatened the lives of a large population.

The siege also led to the declaration of martial law throughout Mindanao on May 23, 2017. It was extended thrice by Congress up to Dec. 31, 2019, in all lasting more than two years.

“I feel so sad that what happened in Marawi was not even discussed in the report and seemed to have been forgotten,” Lidasan told the Inquirer.

“For me, it should have been mentioned because if not, the common practice of bombing the communities and the arrest and torture of Moro civilians to force them to confess to being Maute terrorists would continue,” she said.

But Lidasan said the UNHRC review tackled Marawi under the subject of “internally displaced peoples,” particularly the issue of providing compensation to victims.

“The Marawi siege issue and the martial law in Mindanao were not just about compensation. It was about a large-scale bombardment of entire communities by state forces, and should have fallen under the category of human rights and counterterrorism,” she said.

At a rally staged at Palais des Nations in Geneva after the UNHRC concluded its review, Lidasan thanked Australia, Croatia, Canada, Costa Rica, Hungary, Denmark, Germany and Cambodia for urging the Philippine government to respect the rights of indigenous peoples, especially their right to free and prior informed consent, as mandated by the Indigenous Peoples’ Rights Act (Republic Act No. 8371).

“We also appreciate Ecuador’s recommendation in asking the Philippine government to implement a human rights approach to (treating) internally displaced persons. However, it is sad to note that there was no mention of the massive displacement of the Maranao people in Marawi City, or the destruction brought about by [then] President [Rodrigo] Duterte’s martial law in Mindanao in 2017,” Lidasan said.

“What the victims of martial law in Mindanao, the victims of Duterte’s antiterror war in Marawi City want to hear from the UNHRC member-states is to urge the Philippine government to stop the use of heavy armaments, airstrikes and bombings that cause internal displacement of communities; to propose ways to protect the rights of the civilians in the antiterror war; and to call for a stop to the antiterror measures that violate the rights of the Bangsamoro people, the indigenous peoples and the Filipino people in general,” she added.

Lidasan noted that in the last two decades, the Moro people had borne the brunt of the government’s antiterrorism drive, mainly in terms of human rights abuses, brushing aside the claims of Justice Secretary Jesus Crispin Remulla before the UNHRC that the state employed a “human rights approach” in its counterterrorism efforts.

She said the antiterror campaign, including the operations at Marawi, pushed the Moro people into a humanitarian crisis and deeper into poverty.

The five-month fighting in 2017 displaced more than 350,000 people, turned the city’s commercial district into rubble, and gave rise to human rights violations, such as torture, unwarranted arrests and illegal detention, Lidasan said.