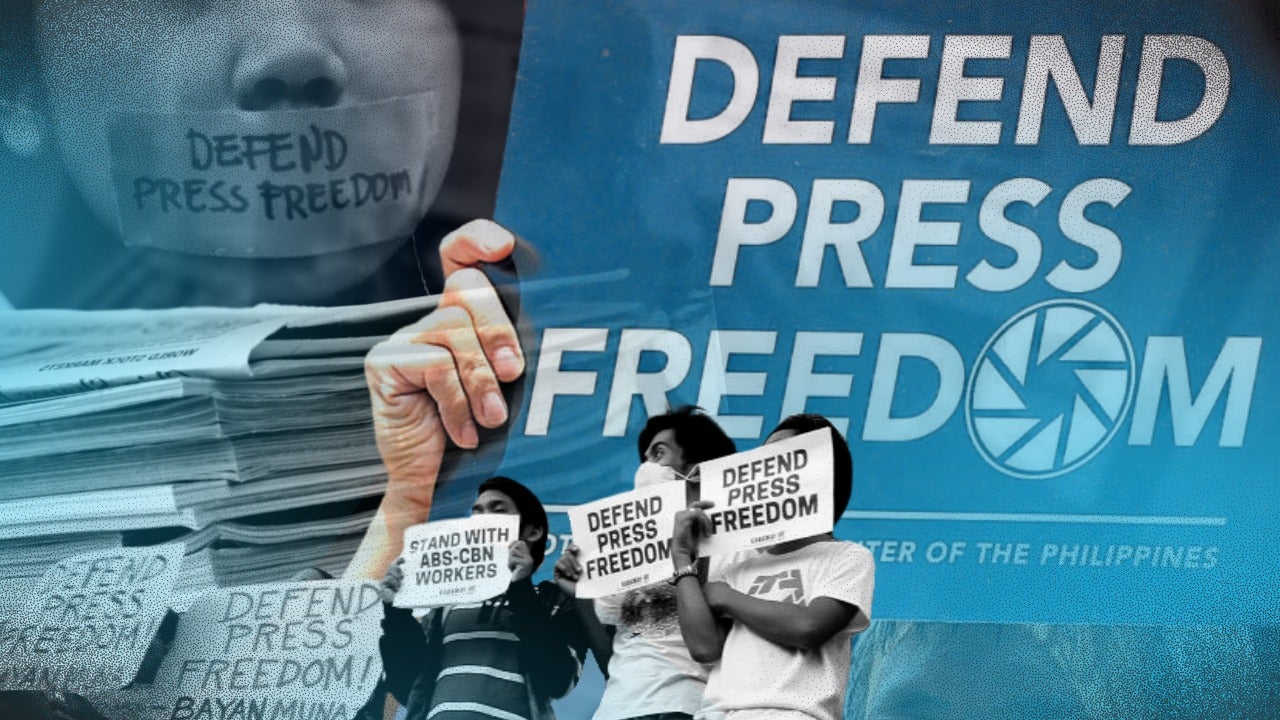 MANILA, Philippines—Due to the still increasing cases of threats, attacks, and killings of journalists, the member states of the United Nations Human Rights Council (UNHRC) called on the Philippine government to take measures to ensure the safety of media workers in the exercise of their freedom of opinion, expression, and association.

The recommendations from over 20 UN member states during the Philippines Review under the 4th cycle of the UNHRC’s Universal Periodic Review held last November 14 were presented a week after a lawmaker claimed that the Philippines has a “very free media” compared to its neighboring countries. 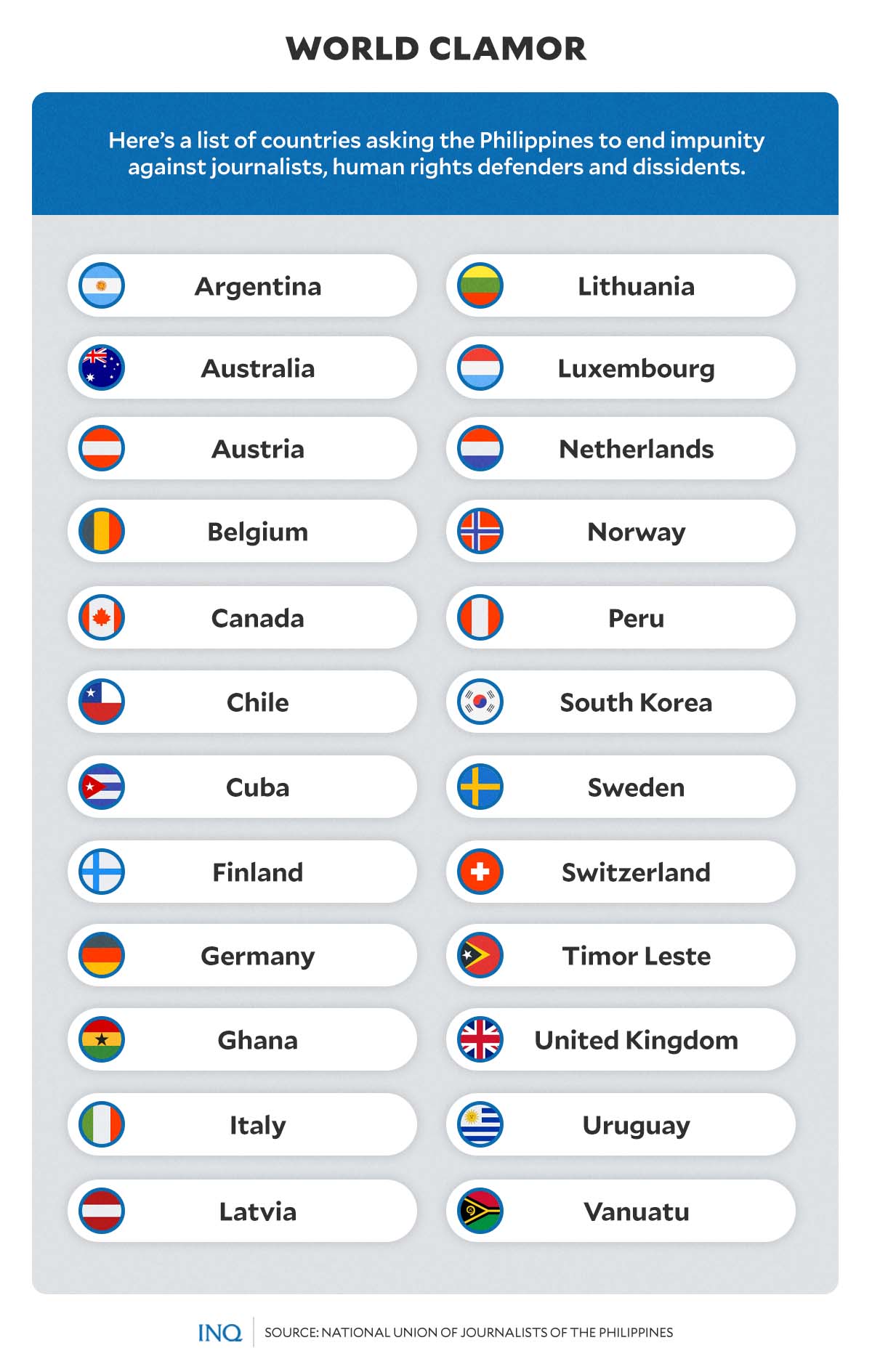 Among the UN member states that gave the Philippine government recommendations to take necessary steps to address impunity against journalists, human rights defenders, and dissidents—as well as ensure a safe and enabling environment for media workers—were:

Several member states also recommended putting an end to the red-tagging of journalists, human rights defenders, and dissidents. In line with this, the following member states likewise called on the Philippine government to review Republic Act No. 11479 or the Anti-Terrorism Act of 2020:

On July 3, 2020, despite massive opposition, then-President Rodrigo Duterte signed the controversial Anti-Terror Bill into law, which criminalizes incitement of terrorism “by means of speeches, proclamations, writings, emblems, banners or other representations.”

It also allows the detention of suspects for up to 24 days without charge and empowers an anti-terrorism council to designate suspects or groups as suspected terrorists who could be subjected to arrests and surveillance.

READ: It’s final: Only 2 portions of Anti-Terror Law are unconstitutional

During the Universal Periodic Review, the United States of America offered several recommendations, including the review and revisal of specific laws in the Philippines.

“We recommend that the Philippines […] review and revise laws and regulations that unduly restrict or inhibit freedom of expression and independent media, including Penal Code articles 353 and 355, the Cybercrime Prevention Act of 2012, and Anti-Terrorism Act of 2020 Section 9,” said Michèle Taylor, US Ambassador to the UNHRC.

Both articles from the Revised Penal Code mentioned by Taylor, as well as a section in the Republic Act No. 10175 or the Cybercrime Prevention Act of 2012, discussed libel—including its definition and punishment.

Article 353 of the Revised Penal Code defines libel as “public and malicious imputation of a crime, or of a vice or defect, real or imaginary, or any act, omission, condition, status, or circumstance tending to cause the dishonor, discredit, or contempt of a natural or juridical person, or to blacken the memory of one who is dead.”

Article 355 discussed the repercussions of libel by writings or similar means.

“A libel committed by means of writing, printing, lithography, engraving, radio, phonograph, painting, theatrical exhibition, cinematographic exhibition, or any similar means, shall be punished by prision correccional in its minimum and medium periods or a fine ranging from 200 to 6,000 pesos, or both, in addition to the civil action which may be brought by the offended party,” the law stated.

On the other hand, Section 4c of Republic Act No. 10175 (Cybercrime Prevention Act of 2012) defined libel as “[t]he unlawful or prohibited acts of libel as defined in Article 355 of the Revised Penal Code, as amended, committed through a computer system or any other similar means which may be devised in the future.”

For years, many journalists and media organizations, as well as human rights defenders, lawmakers, and international groups have been pushing to decriminalize libel in the Philippines.

According to the Center for Media Freedom and Responsibility (CMFR), criminal libel is “one of the most abused means to suppress free expression and press freedom in the Philippines.”

“The fear of possible imprisonment and the imposition of hefty fines has on many occasions silenced press criticism of government officials and even the reporting of matters of public interest,” CMFR said in a previous statement.

The CMFR also noted that as far back as 2011, the UNHRC has declared the punishment for criminal libel in the country “excessive” and in violation of the International Covenant on Civil and Political Rights (ICCPR) “in which the Philippines is a signatory.”

“The criminalization of journalists for libel impedes public interest reporting and is incompatible with the right to freedom of expression. Criminal libel law has no place in a democratic country and should be repealed,” said Khan.

“I am also concerned that the 2012 Cybercrime Prevention Act is being applied retroactively in this case, as the Rappler article in question was published before this law was enacted. This is yet another example of the relentless attack against Maria Ressa for daring to speak truth to power,” Khan added.

Section 9 of Republic Act No. 11479 or the Anti-Terrorism Act (ATA) of 2020, states that “any person who, without taking any direct part in the commission of terrorism, shall incite others to the execution of any of the acts specified in Section 4 hereof by means of speeches, proclamations, writings, emblems, banners or other representations tending to the same end, shall suffer the penalty of imprisonment of twelve (12) years” with “inciting to commit terrorism”—as the basis.

In a statement released in May 2021, journalists and media organizations denounced the ATA, which they said tramples upon fundamental freedoms, including the freedom of the press.

The statement also stressed that “[a]s the law fails to provide a clear definition of terrorism and is vague about what constitutes acts of terrorism, Section 9 could make media practitioners vulnerable to wrongful charges and arrests, producing a chilling effect on all media practice.”

Last June, upon the request of then-National Security Adviser Hermogenes Esperon Jr., the  National Telecommunications Commission (NTC) ordered internet service providers to block several websites, including independent media, “found to be affiliated to and are supporting terrorist and terrorist organizations.”

Among the websites were Bulalat and Pinoy Weekly—alternative news sites that are focused on covering news and issues concerning the most marginalized groups in society such as farmers, fisherfolk, indigenous communities, and the urban poor.

However, the National Union of People’s Lawyers (NUPL) found that the NTC order has no basis in law.

“Nowhere in the Anti-Terrorism Act (ATA) of 2020 has the NTC, the National Security Adviser, the National Security Council or the Anti-Terrorism Council been given the power to block cyber traffic nor content data more so if based on reckless suspicions of terrorist activities nor due to conclusory claims of alleged affiliations with designated individuals or groups,” NUPL said.

It added that even the Cybercrime Prevention Act of 2012 does not permit such state action.

The National Union of Journalists of the Philippines (NUJP) denounced the arbitrary inclusion of Bulatlat, Pinoy Weekly, and other alternative news sites in the NTC order, calling it a “blatant violation of press freedom and of the very basic idea of the free flow of information and of ideas.”

Similar to the US, Greece recommended that the Philippine government “take urgent measures to address the systematic crackdown of media freedom under the guise of anti-terrorism policies.”

Earlier this month, ahead of the Universal Periodic Review, the UNHRC released its concluding observations on the fifth periodic report of the Philippines.

The UN committee stressed its concerns over reports of human rights violations in the country. It also highlighted the “persistent violation” of the freedom of expression, citing the “widespread harassment and intimidation of journalists; and cyberattacks, including State-sponsored attacks, against independent media outlets, severely disrupting their operations.” 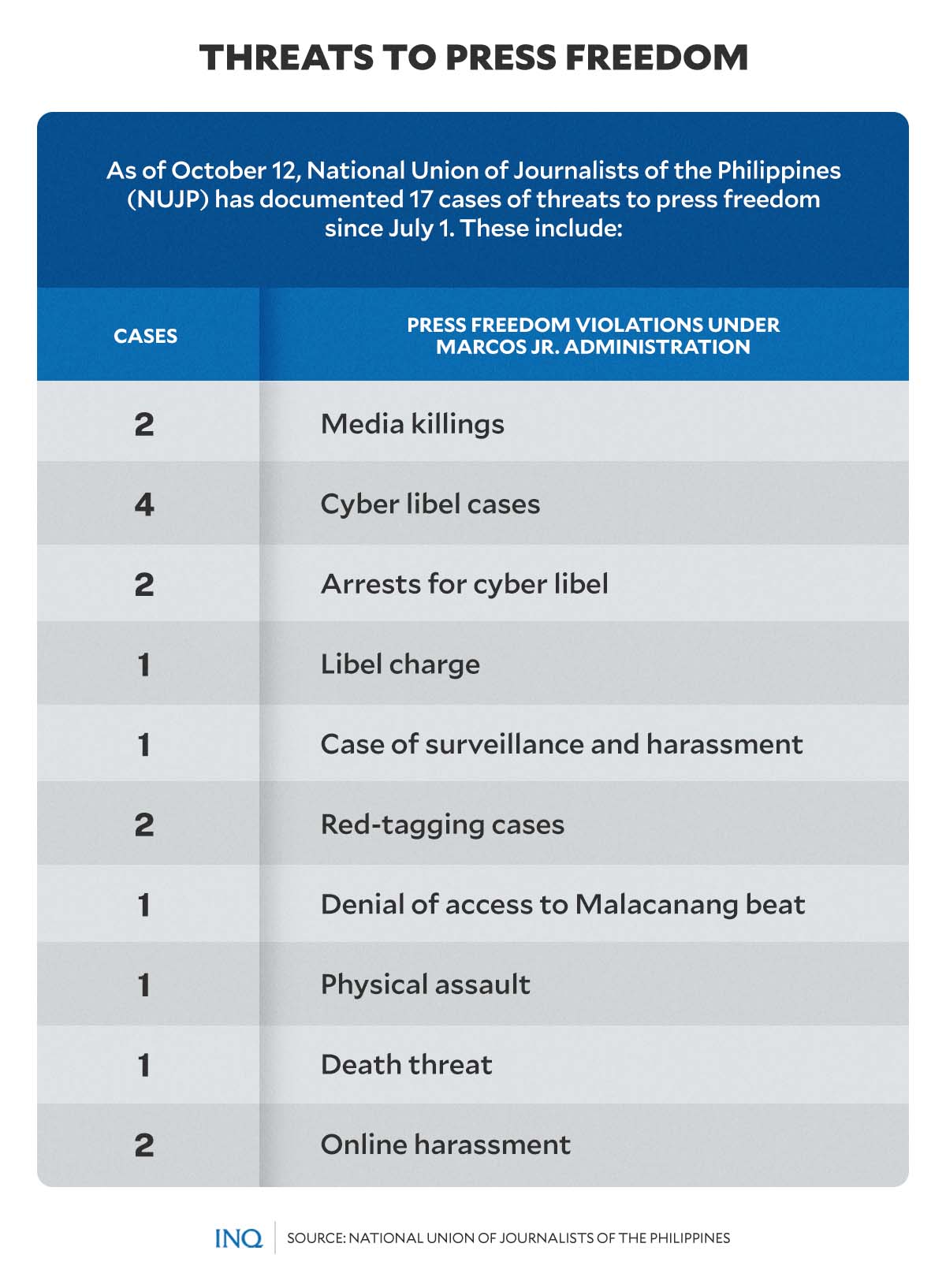 It also mentioned the numerous killings of journalists in the Philippines—including the recent killing of radio journalist Percival Mabasa.

READ UNHRC’s concluding observations on the fifth periodic report of the Philippines here:

Senate President Juan Miguel “Migz” Zubiri, when asked at a press conference last November 7 on whether he thought that the UNHRC’s concluding observations of the country “damages the image of the country,” responded by saying:

“We have a free media. You are guys are all free. [Nami]-misquote nga ako minsan eh. Naiinis nga ako sa inyo minsan. You take my quote out of context kaya pinapa-record ko na eh.”

Zubiri also claimed that the Philippines has a “very free media” compared to Singapore, Malaysia, and Vietnam.

However, independent media group Vera Files on November 14, fact-checked Zubiri’s claim and found that the Senate President “falsely claimed that the Philippines has a ‘very free media’ compared to countries like Malaysia and Singapore.”

Citing the 2022 rankings by RSF, Vera Files bared that the Philippines ranked 147th out of 180 countries in terms of media freedom, while Malaysia placed 113th, and Singapore at 139th. 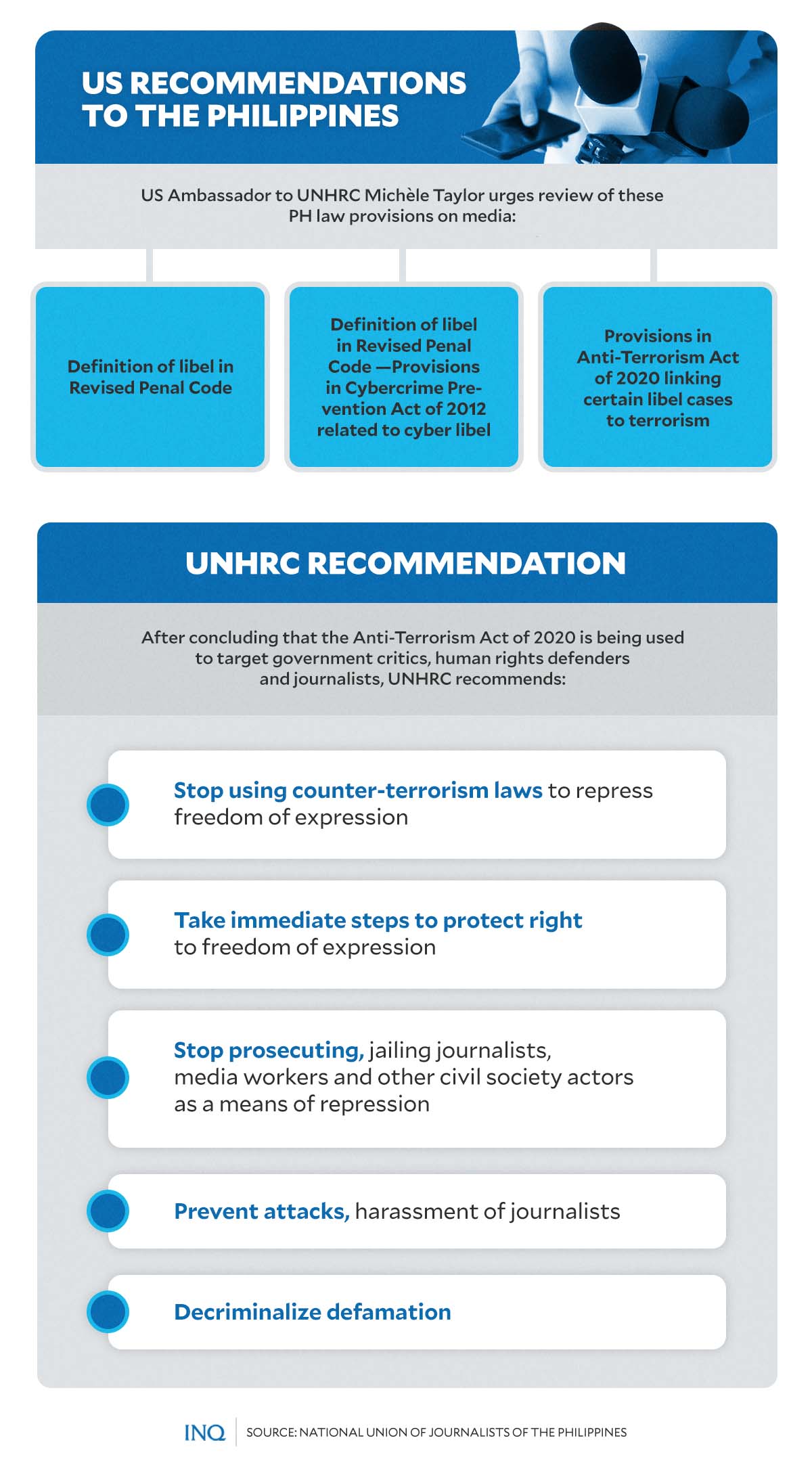 “Of the four countries Zubiri had mentioned, the Philippines received the second lowest score on the security indicator, with 24.83 out of 100 points,” the Vera Files report added.

Meanwhile, the Committee to Protect Journalists’ (CPJ) Global Impunity Index 2022 showed that the Philippines remains among the most dangerous and deadliest countries in the world for journalists.

READ: PH still among most dangerous countries for journalists

Sought for his opinion on whether the Philippine media is actually as free as Zubiri claims, NUJP chairperson Jonathan de Santos said in a television interview:

“We are partly free. There is the freedom to, for example, publish stories, cover certain issues, but we can’t deny that there is a fear of reprisal, and there actually have been cases of reprisals.”

As of October 12, the NUJP  has documented 17 cases of press freedom threats since July 1, or when the Marcos Jr. administration began.

The UNHRC, in its concluding observations, recommended the Philippines to: